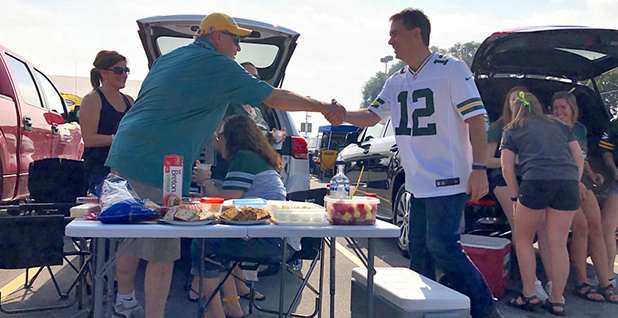 The Wisconsin gubernatorial race has quietly become a top environmental priority this fall. The greens and national Democrats think they have their best shot in years at accomplishing something that thus far has eluded them — unseating Gov. Scott Walker (R).

Walker is running for a third term after his 2016 presidential run went out with a whimper. Wisconsin’s purple politics and a bad national environment for Republicans could spell trouble for the incumbent.

Two recent polls show Evers leading Walker by at least five points. A Sept. 12-21 survey from Reuters/Ipsos/University of Virginia Center for Politics shows Evers up 50 to 43 percent. And a new Marquette University Law School poll conducted Sept. 12-16 shows Evers ahead of Walker 49 to 44 percent. The RealClearPolitics average shows the Democrat ahead by a similar margin.

But the governor’s electoral history points to him being a tough out. Walker took office in 2010 after winning a tight race and then survived a recount election two years later. He was re-elected in 2014.

Both of Walker’s general-election wins, however, came in terrible midterm cycles for Democrats. He now faces a drastically changed political landscape.

Democratic enthusiasm is up, and President Trump’s high negatives present a challenge for prominent GOP incumbents, including Walker.

This is especially true in the Midwest, where a strong lineup of gubernatorial candidates has Democrats confident in Minnesota, Wisconsin, Iowa, Michigan, Illinois and Ohio.

Several prominent ex-Walker officials are also voicing support for Evers. They allege Walker instructed them to destroy documents, meet with payday loan lobbyists and hinder public records laws. Two of these aides appear in ads for the Evers campaign.

For his part, Walker’s office claims it has followed public records law, according to the Milwaukee Journal Sentinel.

Democrats have pinned their hopes on Evers, 66, the state education superintendent. He has a populist streak, statewide election wins and a history of clashes with Walker over the governor’s budget cuts to state schools.

After winning the packed August primary, Evers raised more than $1 million in a week, and large liberal spenders such as End Citizens United have waded in. The race is top priority of the Democratic Governors Association. An affiliate known as A Stronger Wisconsin has spent $2.23 million and reserved $3.62 million in airtime so far.

Environmental groups have joined the fight. The race appears on the League of Conservation Voters’ priority list, to which it will devote at least $25 million this fall nationwide (Greenwire, Sept. 13). Evers was among the most prominent names on an LCV pledge to back policies toward 100 percent clean energy by 2050 (E&E News PM, Sept. 12).

"If the federal government won’t act, then the states must act" on climate change, Mandela Barnes, Evers’ running mate, said on a press call earlier this month.

The Wisconsin League of Conservation Voters will use the funds for digital advertising and a door-knocking campaign, but it has not disclosed expected spending figures.

Walker and his allies have hit back hard. In a recent ad, the governor blamed Evers for failing to revoke the license of a male teacher who watched pornography in school. The Republican Governors Association and the state GOP are spending heavily, backed by the state branch of the Chamber of Commerce.

Earlier this month, Americans for Prosperity, the conservative advocacy group run by petrochemical billionaire Charles Koch, announced a $1.3 million injection into the race. This follows a $1.8 million ad buy in August.

The group’s public efforts target Evers for a willingness to raise gas taxes to pay for road improvements.

Greens have high hopes for Evers

Environmental groups have fought Walker his entire tenure in office.

The trouble, according to the greens, began even before Walker took office in 2010, when he vowed to reject $810 million in federal funds earmarked for a Wisconsin high-speed rail.

After he was sworn in, his administration did away with the science division at the Department of Natural Resources while cutting oversight. During Walker’s first term, the number of violations reported by the agency dropped 60 percent, according to some estimates (Greenwire, Oct. 24, 2014). Drinking water issues abound, particularly stemming from industrial farm operations.

These are not the issues dominating the gubernatorial race. Evers has slammed Walker over large budget cuts to the state school system while stressing health care expansions. Walker, for his part, has played up his pro-business record, his primary political calling card.

Some of this sparring over Walker’s support for business has centered on Foxconn Technology Group, a massive new manufacturing plant backed by a Taiwan-based company. In a controversial ruling, EPA exempted the plant, which is expected to be a major source of carbon emissions, from federal anti-smog ozone regulation.

The plant sits near the Illinois border. Lisa Madigan (D), Illinois’ attorney general, sued EPA, accusing the agency of illegally labeling the area in compliance with a 2015 ground-level ozone law.

Walker attracted the plant with a $4 billion incentive package — and waived an environmental impact statement. He pitches the project as an economic boon that will create more than 13,000 jobs. Trump visited Wisconsin for the groundbreaking at the site, and a Foxconn executive credited Walker and Trump for bringing the factory to Wisconsin, according to the Wisconsin State Journal.

Evers accuses Walker of substantial concessions to a foreign company at the expense of the state.

"For $4.5 billion they can help provide transportation for workers, commit to a living wage for all employees and invest in renewable energy like solar panels that could provide electricity to 33,000 Wisconsin homes," Evers wrote on Twitter.

Foxconn is in talks with the state utility for what would be the state’s largest solar array (Energywire, Aug. 3).

Schumann of the Wisconsin League of Conservation Voters called Foxconn’s water waiver "incredibly bad precedent." If Evers is elected, she said she hopes he would require stricter environmental oversight of the plant construction and operation. Evers has consistently taken this tack during the campaign.

"They’re taking our wetlands. … Now they want our water," Evers’ campaign wrote on Twitter in January, a few months after he announced he was running for governor. "When it comes to Foxconn, what’s in it for the rest of us?"