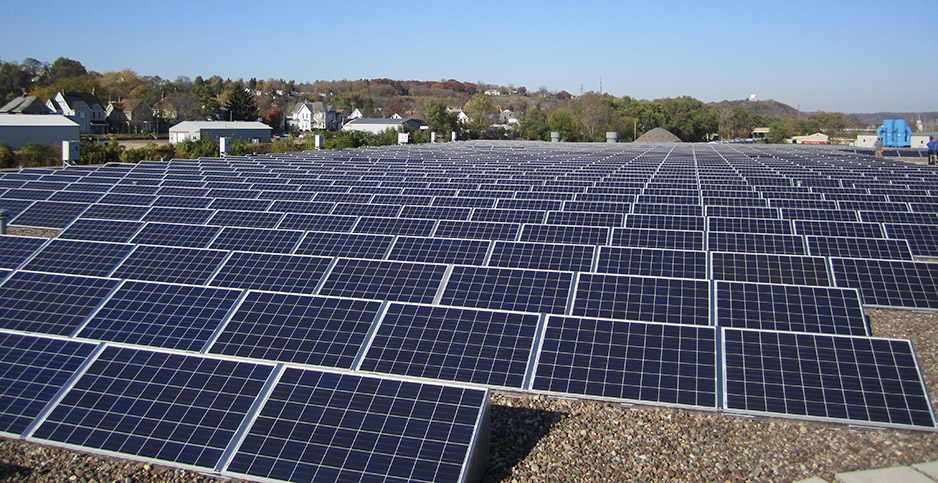 Eagle Point Solar LLC is suing We Energies and the Wisconsin Public Service Commission after the utility denied a request to connect solar energy systems on six properties owned by the city of Milwaukee. Eagle Point Solar

The key question in the lawsuit is whether Wisconsin law permits third-party financing of solar projects, a key financing tool to help consumers generate electricity to reduce utility bills and carbon emissions.

While at least 26 states have specifically authorized third-party solar power purchase agreements, including those across the Southwest and Northeast, other states expressly disallow such arrangements or haven’t provided any legal clarity, including Wisconsin, according to data from the North Carolina Clean Energy Technology Center.

The Wisconsin dispute is the latest of numerous battles simmering between solar developers and utilities that see them as a competitive threat. Such is the case in Wisconsin, where We Energies has been unyielding in its efforts to make distributed solar energy a less attractive alternative for customers (Energywire, May 13).

In the case of Eagle Point, it means effectively vetoing an agreement to provide solar energy to the city of Milwaukee.

"If anyone sells electricity to our customers, they should be viewed as a public utility and should be registered as such," utility spokesman Brendan Conway said in an email statement. "Because we already provide retail electric service to the city, Wisconsin law prohibits Eagle Point from doing so."

Shear scoffs at the idea that his Iowa solar company is trying to muscle in on We Energies’ monopoly. He also knows that the utility, a unit of WEC Energy Group Inc., a $26 billion holding company, is going to dig in and fight this issue to the end. And he vows to do the same.

"I’m not giving up," he said. "There’s a principle involved here. … And because they have endless and unlimited financial resources, I imagine at some point this will make it to the Wisconsin Supreme Court."

A similar lawsuit in Iowa in 2014 made it to that state’s high court, which issued a legal victory for Eagle Point against Alliant Energy Corp. (Energywire, July 14, 2014).

Shear said there was no legal precedent in Iowa when the state Supreme Court ruled in his favor. But there are numerous cases in Wisconsin going back a century or more that clearly define what is a public utility and what isn’t.

"Just because I’m selling energy to the city of Milwaukee doesn’t mean I’m a public utility," he said.

Third-party financing of solar projects typically involves a developer owning solar equipment on a customer’s home or office and selling the customer the output under long-term contracts. It’s a key financing tool as upfront cost remains a significant barrier to solar adoption, even though panel prices have fallen sharply in recent years.

For local governments, churches and nonprofits, the financing tool is even more important because they don’t pay taxes and can’t take advantage of the 30% investment tax credit (ITC). Third-party ownership allows the ITC benefit to be monetized and passed through.

Such is the case in Milwaukee, which last year sought proposals to install 1.1 megawatts of solar on three libraries, two public works buildings, a police station and a garage as part of the city’s sustainability efforts to reduce carbon emissions.

The city signed a solar services agreement with Eagle Point last fall that called for the company to own 80% of each solar system while the city would own 20%. The company would buy, operate and maintain the equipment and sell all the output to the city to offset some of its power demand. No excess energy would be flowed back onto the local grid.

Shear said company representatives met with We Energies engineers early on to discuss interconnection, with not a hint the utility would deny its interconnection request.

By the time it did, Eagle Point had already purchased more than $1 million of solar equipment and invested countless hours on designing the system.

"I really got kneecapped on this," he said.

In March, Eagle Point appealed We Energies’ interconnection denial to the PSC and asked regulators to declare the agreement with the city doesn’t make the company a public utility.

More than two dozen other parties weighed in, including other solar developers, cities, environmental groups and renewable energy advocates. The League of Wisconsin Municipalities and the Wisconsin Association of School Boards each supported the petition.

But while the PSC opened a case to examine whether We Energies was justified in denying interconnection to Eagle Point, it voted 2-1 to punt the broader issue and said it should be decided by the Legislature — the reason the commission is named as a co-defendant.

"The Public Service Commission is a regulatory body, but it’s also a political body, and they didn’t do their job," Shear said.

Further frustrating Shear and Milwaukee officials, in the very rejection letter denying interconnection of the Eagle Point solar projects, We Energies pitched a pilot program under which customers could host solar generation on their rooftops or vacant land for a monthly lease payment (Energywire, Dec. 13, 2018).

Unlike with the rooftop solar projects Eagle Point would build, energy from the so-called rent-a-roof program would not go to the city, but to the grid.

Critics say the Solar Now program has little to do with enabling distribution generation.

"They’re just renting real estate," Shear said. "In my opinion, they’re doing that to shut solar developers out of the process."