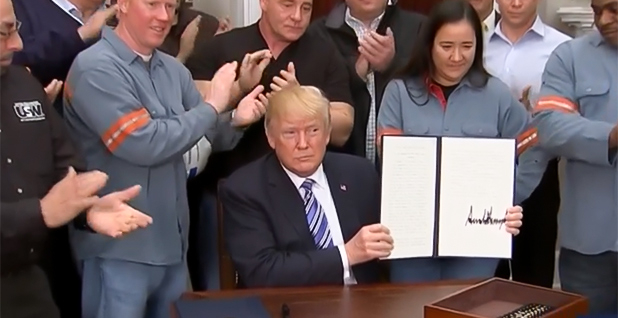 The political network affiliated with the billionaire Koch brothers is launching an effort to shore up support for free-trade policies, as congressional Republicans and business interests are growing increasingly uneasy over the direction of the Trump administration’s trade agenda.

The groups, which include the Freedom Partners Chamber of Commerce, Americans for Prosperity and the LIBRE Initiative, announced plans yesterday for a multiyear, multimillion-dollar campaign "to champion the far-reaching benefits of trade and oppose tariffs and other barriers."

"This campaign makes a clear statement," Freedom Partners Executive Vice President James Davis said in a statement. "Trade is a major priority for our network.

"We will work aggressively to educate policymakers and others about the facts," he said. "Trade lifts people out of poverty and improves lives. It is critical to America’s future prosperity and our consumers, workers and companies."

A position paper by the groups talks up the benefits of trade while calling on President Trump to scrap an assortment of tariffs recently imposed or under consideration.

The effort comes amid growing fears among companies and Republican lawmakers over the administration’s hard-line positions in ongoing simultaneous trade negotiations with multiple regions on trade, including China, Mexico, Canada and the European Union.

While free trade has long been a central tenet of the Grand Old Party, the president has moved aggressively to reorient U.S. trade policies to the "America First" philosophy he espoused on the campaign trail.

Yesterday, high-profile talks with China intended to halt a possible trade war ended without an agreement. Over the weekend, Canadian Prime Minister Justin Trudeau described Trump’s attitude toward trade with his country as "insulting."

GOP lawmakers have registered their opposition to Trump’s flirtation with broad tariffs, as well as the administration’s hard-line positions in talks to rewrite the North American Free Trade Agreement.

But so far they have largely held back from threatening legislative action to limit the president’s ability to unilaterally set trade policy.

Instead, senior Republicans have vowed to continue working with the administration to soften the impact of trade policies they normally would oppose (E&E Daily, March 14).

Both House Speaker Paul Ryan (R-Wis.) and Senate Finance Chairman Orrin Hatch (R-Utah) signaled last week they would continue to try to influence, rather than confront, the administration after Trump shocked the world by allowing steel and aluminum tariffs to take effect against imported products from Canada, Mexico and the European Union — all long-standing U.S. allies (E&E News PM, May 31).

"There are better ways to help American workers and consumers," Ryan responded in a statement. "I intend to keep working with the president on those better options."

Hatch, who likened the tariffs to "tax hikes," responded that he will "continue to push the administration to change course" despite "mounting evidence that these tariffs will harm Americans."

"I kind of was because I thought we’d been having a good conversation back and forth," Cornyn said. He described the tariffs as an "unguided missile" that can spark retaliatory tariffs across multiple sectors.

Yet Cornyn also urged continued outreach to the administration.

"I know the president’s getting different advice based on different views in the White House itself, and I would hate this great booming economy as a result of the policies of this administration be squandered by a trade war," he said.

Normally, trade-loving Republicans have had mixed success with the approach. The administration initially scaled back the steel and aluminum tariffs, only to lift earlier exemptions for allies (Greenwire, March 28).

"Steel tariffs in our view are unjust," Greg Armstrong, CEO of Plains All American Pipeline LP and chairman of the National Petroleum Council, said in remarks at the U.S. Energy Information Administration conference in Washington, D.C., yesterday. "A lot of the steel pipe we’re buying right now is not made in the U.S."

But with the risks of a trade war escalating on several fronts, there’s new signs that congressional Republicans may be willing to insert themselves into the fight.

Senate Foreign Relations Chairman Bob Corker (R-Tenn.), who is retiring and has had several high-profile public clashes with the president, took to Twitter over the weekend to criticize recent administration moves.

"These two stories feel like something I could have read in a local Caracas newspaper last week, not in America. Venezuela, here WE come!" Corker wrote, referencing stories on Trump’s decision on steel tariffs and his order that aims to prop up coal and nuclear plants.

In a later tweet, Corker announced that he was "working with like-minded Republican senators on ways to push back on the president using authorities in ways never intended and that are damaging to our country and our allies. Will Democrats join us?"

A Corker spokeswoman said yesterday the senators were working on legislation "that would address the administration’s recent actions to intervene in markets by abusing the president’s national security authorities."

However, similar legislative pushback, S. 2538, to the steel tariffs by Sen. Jeff Flake (R-Ariz.) — who like Corker is also retiring — has barely registered on Capitol Hill, gaining just one co-sponsor since its introduction in March.

Sen. Rob Portman (R-Ohio), who served as U.S. trade representative during the George W. Bush administration, noted at the time that finding agreement among 60 senators on trade policy made such legislative gambits an uphill fight.

However, the Koch brothers’ campaign could help shore up congressional resolve on tariffs and other policies related to trade.

In addition to calling for Trump to permanently lift the steel, aluminum and solar barriers, and scrapping similar tariffs aimed at China, the groups’ policy paper urges Congress to hew to traditional free-trade principles by abolishing agricultural quotas, commodity subsidies, the Export-Import Bank and the Jones Act, which imposes requirements on goods shipped by vessels within the United States.

Cornyn left the door open to Corker’s forthcoming legislation. "I look forward to seeing what he’s working on," he said.