With Haaland in charge, a push to name tribes’ links to land 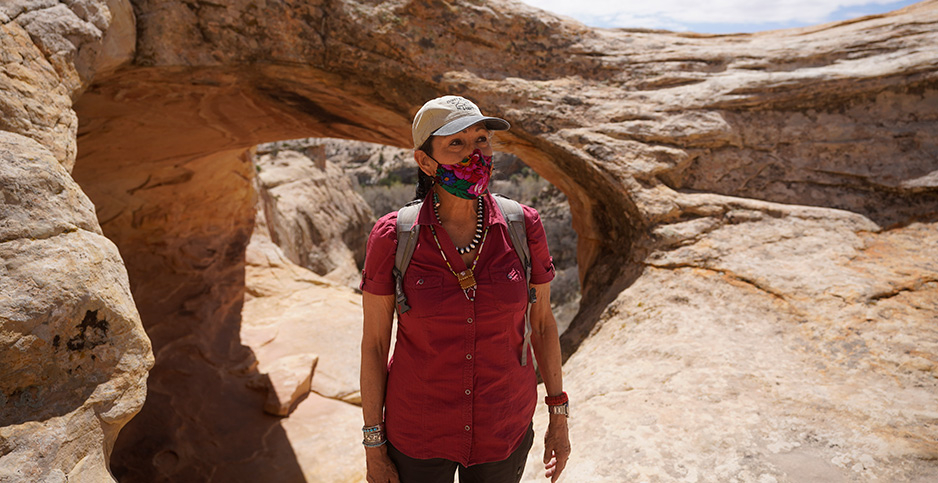 Now that the Interior Department has a Native American at the helm, some advocates wonder whether a practice called land acknowledgments — a way of recognizing tribal history — could become standard at the agency.

A land acknowledgement is a formal statement, often given at the beginning of a public event, that recognizes the event is taking place on land originally inhabited by Indigenous peoples. It’s seen as a way to respect the relationship Native Americans have with the land and represent history accurately.

Fawn Sharp, president of the National Congress of American Indians, begins speeches by saying she’s "coming to you from the land of the Quinault people, right next to our lake or our river, depending where I’m sitting at the time."

The land acknowledgement, she said, "is a way of very publicly acknowledging those who’ve gone before us and the unique relationship that Indigenous peoples have with our lands and territories for millennia."

Some advocates say they’d like to see Interior adopt the practice of land acknowledgements under Secretary Deb Haaland, an enrolled member of the Laguna Pueblo, and maybe even make it a policy.

"I’d love to see the Department of the Interior take these steps," Sayers-Roods said. "What comes with it is beautiful and also painful work" — the kind of work that comes with honoring truth in history and righting historical wrongs.

"The more of us that do it, the more we shift the standard," she said.

Supporters say that while the complicated history of colonization isn’t so easily fixed, it would be a good first step in improving relations by demonstrating respect for Indigenous sovereignty and history. Haaland’s appointment as the first Native American atop Interior offers a new opportunity.

"Let’s be honest," said Angelo Baca, the cultural resource coordinator for Utah Diné Bikéyah, who is from the Navajo and Hopi nations. "If it wasn’t her doing that, it would never be done in that federal space. It might be a good move for them to understand why that’s even necessary."

His traditional introduction includes talking about where his clans are geographically. "Tł’ááshchí’í" translates to "the Red Bottom People" in English. That refers to the Colorado Plateau, "the red orangey dust that stains your white socks when you’re hiking around," and has multiple meanings — the red bottoms of their feet, the red bottoms of their land and their reputation as runners.

"Land acknowledgements are good," Baca said. "They’re helping to heal the wounds of the past while building the bridges of the future."

Haaland has opened remarks and meetings with land acknowledgements, including during her Senate confirmation hearing and at a virtual inauguration event.

"I acknowledge that we are on the ancestral homelands of the Nacotchtank, Anacostans and Piscataway people," she said to open her confirmation hearing.

"We acknowledge the legacy of this land’s original inhabitants and find inspiration from the lands and the waters," she said during the inauguration event. "We recognize that our country was built on Indigenous land, and we pay tribute to the Indigenous nations who have stewarded these lands, these waters, these animals for centuries and who have made great sacrifices in the building of our country."

"At the Department of the Interior, practicing indigenous land acknowledgement is also part of living out our leadership role in honoring the nation-to-nation relationship with federally recognized tribes," Cherry wrote in an email.

He had no comment on more specific plans at the agency regarding land acknowledgements.

Haaland told members of the media Friday that the Biden administration has an "ambitious agenda" focusing on Indigenous representation across all levels of government (E&E News PM, April 23).

"Every federal agency needs to be thinking boldly about our obligations to Indigenous peoples," she said at a White House press briefing. "The significance of being the first Native American to serve in the Cabinet is not lost on me."

Land acknowledgements are much more mainstream in countries like Australia, New Zealand and even Canada. For example, starting the day with an acknowledgement has been a morning ritual at almost 600 schools across the Toronto school district since 2016.

Even rock band Portugal. The Man starts its concerts with a formal statement.

There’s no one-size-fits-all approach. Those seeking to begin land acknowledgement practices are encouraged to consult with surrounding Indigenous communities to get it right. A township in Colorado recently reached out to Baca for help.

Another resource is an app called Native Land Digital, created during Canadian pipeline activism in 2014. The nonprofit has mapped over 1,000 Indigenous territories in 30 different countries and also includes treaty territories and traditional languages spoken.

"It’s a great gesture, but there’s also great responsibility that comes with making them," she said. "While it helps elevate the consciousness of whose land we might be on, there’s still a need for action that’s associated with that land acknowledgement."

The U.S. Department of Arts and Culture — not a government entity, but a nonprofit formed with an ironic name — calls on all individuals and organizations to open public events and gatherings with an acknowledgement of Indigenous land and stewardship.

"Of course we’d be thrilled to see it" also occur at Interior, co-Director Jordan Seaberry said.

The group made a land acknowledgement toolkit that’s been downloaded nearly 40,500 times.

"We certainly have seen it grow in the public consciousness and enter into the mainstream in these last few years," Seaberry said. "It’s been a palpable change. That means our country is potentially ready to take that first small step towards right relationships, and now the question is, how do we actualize the work that comes after that?"

Some organizations say they aren’t advocating for land acknowledgement adoption by Interior because it isn’t enough.

The Native Governance Center’s mission is supporting Native nations by strengthening their sovereignty. Operations Coordinator Lauren Kramer said the organization’s priority is seeing Interior respect sovereignty and treaties. She wrote in an email that the center has started a "beyond land acknowledgement" series because it has found acknowledgements ring hollow and put too much of the burden of improving tribal relations onto Native organizations.

McRae of the Native Land platform has similar concerns.

"We need to make sure acknowledgements don’t become token gestures," she said.

"It’s not enough to improve relations," he said. "It’s enough to have substantive policy legislative change about decisions that belong to Native peoples who are still here about their lands."