With Hummer and $2B factory push, GM roars ‘electric’ 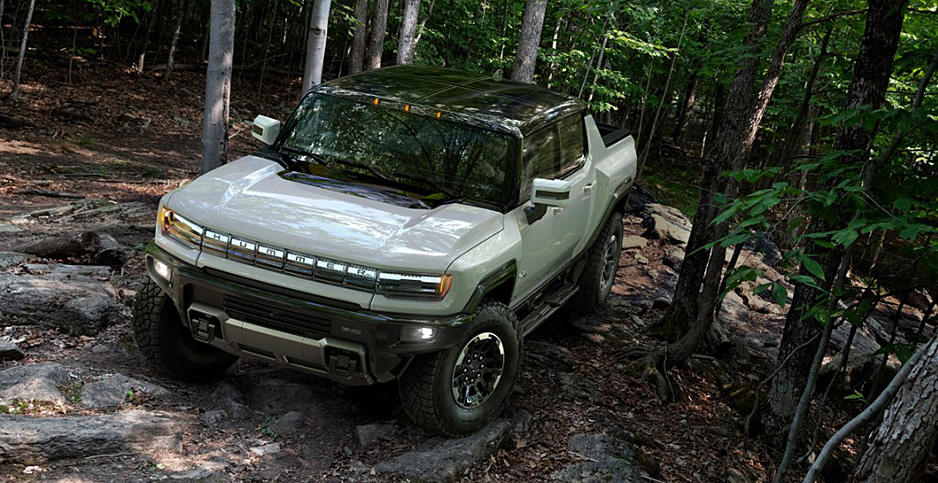 General Motors yesterday debuted the new Hummer it bills as "the world's first all-electric supertruck." Versions of it debut from 2022 to 2024. General Motors Co.

After a quarter-century of building and honing — and also slow walking and killing — the electric car, General Motors yesterday shouted about it from the rooftops.

In a two-minute commercial in Game 1 of the World Series, General Motors Co. unveiled the new Hummer, which it billed as "the world’s first all-electric supertruck." Combined with other marketing platforms, GM aims for some version of the ad to reach 80% of all Americans.

But observers said it sent a clear message.

"They’re not going to sell a lot of Hummers. That’s not the point," said Alan Baum, a Detroit-area consultant who forecasts auto sales. "The point is to bring something completely new to a segment they have already been strong in on the gas side and redefine it."

Also yesterday, GM sent another signal as it announced it would turn another factory, its third, over to electric-vehicle production.

The automaker said it will spend $2 billion to convert its plant in Spring Hill, Tenn., to make electric car models starting with the Cadillac Lyriq, an EV it unveiled in August (Energywire, Aug. 7).

GM pulled out all the stops yesterday to make the Hummer campaign stand out.

The commercial features a truck with an "extract mode" that lifts it 6 inches and a "crab mode" that shuttles it diagonally. More expensive packages include underbody cameras to see obstacles while off-roading, and glass "infinity roof" panels that detach and store in the front trunk — a storage area made possible by the lack of an internal combustion engine.

GM said the Hummer would have a range of 350 miles or more, which puts it in the mix with other electric trucks that are heading toward production, including the Rivian R1T, the electric Ford F-150 and the Tesla Cybertruck.

But the extra features will come at a price — and with a wait.

By comparison, the base model of the Rivian R1T is estimated at $70,000, and Elon Musk has said the simplest version of Cybertruck will be $40,000. Like the Hummer, the more expensive versions of those vehicles arrive first.

Unlike its competitors, GM with the Hummer is the first to supply an electric truck with the kind of razzle-dazzle that traditional automakers can drum up when they really want to sell a car.

Besides a long slot before baseball’s biggest audience, the Hummer ad is appearing on the season premiere of NBC’s top-rated show, "The Voice," as well as numerous online platforms. GM told CNBC that it anticipates 255 million Americans will be exposed to the reveal.

"The level that GM is trying to market this vehicle is something new," said Chris Harto, a transportation and energy analyst at Consumer Reports.

Other high-profile electric vehicles have seen rollouts in the last few months, including the Volkswagen ID.4 SUV, the Ford Mustang Mach-e SUV and GM’s other electric entrant, the Cadillac Lyriq.

But those efforts were mostly online, not before millions of sports fans.

"Tonight is one of those enormous inflection points about our future," said Deborah Wahl, GM’s global chief marketing officer, yesterday on an Automotive News podcast.

The rollout of the new Hummer is the culmination of two drastically different legacies at GM, America’s largest automaker.

The first legacy is that of electric cars. GM has been making EVs longer than just about anyone, starting with the EV1 in 1996. It leased and then forcefully reclaimed them, gaining notoriety in the documentary "Who Killed the Electric Car?"

It went on in 2011 to develop the Chevy Volt, one of the first plug-in hybrids, which the company discontinued last year. In 2016 came the Chevy Bolt, an all-electric hatchback that hasn’t sold very well — or been advertised much.

"GM has done an exceptional job with its EVs," said Baum. "What they haven’t done is market them particularly well."

The second legacy is that of the Hummer: originally a 7-foot-wide, rock-eating monster that got 10 miles to the gallon and was almost the dictionary definition of "gas guzzler."

The Hummer brand began at the now-defunct automaker AM General, which based it on the Humvee, the four-wheel utility vehicle it made for the U.S. military. The Hummer became famous as the ride of Arnold Schwarzenegger.

GM purchased the brand in 1998. AM General continued to make the original vehicle while GM made two smaller versions to broaden its appeal.

In 2009, amid higher oil prices and as part of its bankruptcy, GM nearly sold the brand to a Chinese company, then called the project off, dismantling Hummer’s factory lines and dealerships.

The new Hummer combines those two histories as a rock-hopper that can tow heavy loads and plays to the electric vehicle’s strengths: excellent torque and speed.

The new Hummer is expected to have 1,000 horsepower, much more than the Chevrolet Corvette ZR1, a luxury sports car that is the most powerful that the GM brand has ever made. It is advertised to go from zero to 60 in three seconds, nearly as fast as the Corvette Stingray, which GM recently said is its fastest car.

While drawing less attention, the word that GM would spend $2 billion to convert its Tennessee factory to electric vehicles was hailed by analysts as a sign of a growing commitment.

It joins two other factories in the process of being switched to electric production, Orion Assembly and Detroit-Hamtramck. Both of those are located in Michigan.

The marquee is the Detroit-Hamtramck plant, which is undergoing a $2.2 billion retrofit to build both the Hummer and the Cruise Origin, an electric self-driving shuttle. Last week, partially in a nod to the electric vehicle’s lack of tailpipe emissions, GM officially changed its name to "Factory Zero."

"Factory ZERO is the next battleground in the EV race and will be GM’s flagship assembly plant in our journey to an all-electric future," said Gerald Johnson, GM’s executive vice president of global manufacturing, to the Detroit Free Press.

Between them, the three plants have a price tag of $4.5 billion. Overall, GM has committed $20 billion to its electrification efforts through 2025, including a battery plant it is building alongside Korea’s LG Chem Ltd. in Lordstown, Ohio.

The Spring Hill factory conversion is a win for Tennessee, which is becoming a locus of EV production in the Southeast.

The Spring Hill plant is outside Nashville, as is the factory where Nissan has made its electric Leaf for a decade. To the south, in Chattanooga, Volkswagen is undergoing an $800 million expansion to make its electric ID.4.

The Spring Hill renovation "is the single largest expansion investment ever made in our state’s history," said Republican Gov. Bill Lee as part of GM’s announcement.

Last week, the British electric-truck startup Arrival Ltd. said it would build a $46 million "microfactory" in South Carolina, and Mercedes-Benz revealed plans for a $54 million EV parts factory in Alabama.

The fact that GM’s EV factories are multiplying shows that a big number of electric vehicles may be on the way, observers say. Baum, the Detroit-area consultant, and other analysts believe that one of GM’s plants in Mexico might be next.

"They are now saying we are doing enough in EVs that that major investment [in Detroit-Hamtramck] is not the end of the story," Baum said. "They’re going to be in three or four plants in order to make this technology work."

"That in itself is a major statement," he added.

Clarification: This article was updated to reflect that Volkswagen’s $800 million ID.4 expansion is taking place in Chattanooga, Tenn., not "around Nashville."