With no Clean Power Plan, will the Rust Belt stick with coal? 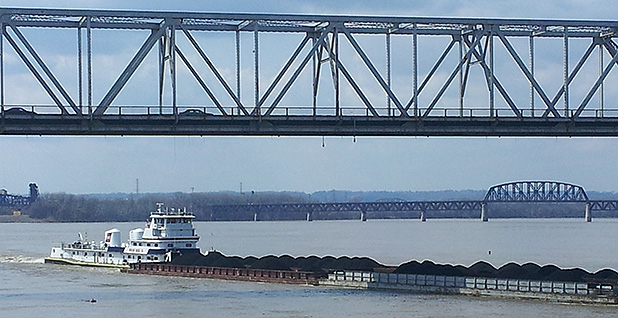 A barge loaded with coal makes its way down the Ohio River. Coal accounts for about 59 percent of power generation in the state, and even more in neighboring Indiana. How the Rust Belt deals with its aging power plants will help determine the country's carbon dioxide emissions in the absence of federal regulation under President-elect Donald Trump. Photo by David Amsler, courtesy of Flickr.

Coal remains king in the Rust Belt. But whether the carbon-laden fuel retains its throne depends on state lawmakers in a handful of Midwestern capitals.

Illinois legislators are debating a bill that would provide subsidies to aging nuclear and coal plants. Ohio policymakers are fielding calls from utilities to guarantee a rate of return for their old coal facilities. And Michigan representatives are sorting through an energy package that will determine the future makeup of their state’s electric grid.

The state decisions come at a critical moment for U.S. energy policy. Donald Trump’s victory over Hillary Clinton in the presidential contest means the United States is unlikely to implement the carbon caps on the power sector proposed under President Obama, which are the centerpiece of America’s participation in the Paris climate agreement.

To the north in Michigan, some Republican lawmakers are calling for policymakers to apply the brakes on an energy package that was developed with the assumption the Clean Power Plan would be put into place. Supporters, who include Gov. Rick Snyder (R), dismiss those arguments. Michigan has witnessed a wave of coal plant closures this year and needs to focus on grid reliability, they say.

"Could some coal plants stay open longer as a result of the Clean Power Plan going away? Yes, I think that’s a possibility," said Paul Patterson, a financial analyst who tracks the utility sector at Glenrock Associates LLC. "We will have to wait and see what the Trump administration comes up with, but also for what the individual states want to do."

The decisions made by Midwestern lawmakers figure to be particularly important. The Rust Belt remains disproportionately reliant on coal to meet its electricity needs, meaning a further greening of the U.S. grid will depend to a great degree on state actions.

Michigan gets 46 percent of its power from coal. The fuel accounts for 59 percent of power generation in Ohio. In neighboring Indiana, that figure reaches as high as 75 percent. Nationally, coal power represents about a third of total power production.

Debate over the Clean Power Plan obscures a more important trend, though, analysts said. Economics will be the main driver in deciding the future makeup of the Rust Belt’s power grid.

Electricity demand in the region is stagnating, in large part due to energy efficiency measures. Natural gas plants are out-competing their coal counterparts. And renewables are fast approaching the point where they can displace coal-fired power, even without subsidies.

There is also this: Many Rust Belt coal plants are simply old.

Analysts predict the region’s electric grid will become less reliant on coal in the coming years, regardless of whether the Clean Power Plan is implemented. But how fast the transition occurs, and what fuels replace it, will depend to a great degree on what state policymakers decide.

Illinois lawmakers have proposed expanding the state’s ability to procure electrons from coal plants in the southern part of the state (EnergyWire, Nov. 16). The provision was largely aimed at winning the support of coal-reliant utilities, like Dynegy Inc., which might have objected to the bill’s financial support for Exelon’s nuclear facilities. But it has attracted a wide array of opposition from environmentalists, who object to the coal facilities’ emissions, and business groups, which are against paying more to keep old plants online.

It calls on Commonwealth Edison Co., which serves the Chicago area, to cut electricity demand 23 percent by 2030 through efficiency measures. The bill would also boost the state’s renewable energy standard, requiring 25 percent of Illinois power to come from low-carbon sources by 2025.

"Right now, the bill is a Christmas tree that badly needs some pruning," said Howard Learner, executive director of the Environmental Law & Policy Center in Chicago.

Lawmakers on the House Energy Committee approved the proposal by a 9-1 margin last week, but the legislation faces a time crunch to go into effect. The Illinois Legislature will meet for three days after Thanksgiving, and lawmakers are already under pressure to pass a budget before the session closes.

In Ohio, state policymakers have been grappling with calls from FirstEnergy Corp. and American Electric Power Co. to re-regulate several of the firms’ old coal plants, which have had difficulty turning a profit in the face of stiff competition from natural gas. Both utilities have promised to press their case with state legislators following a pair of drawn-out battles at the Public Utilities Commission of Ohio. Each firm had asked state regulators for financial assistance to assist their Buckeye State coal fleet, but ultimately saw their proposals rejected by federal regulators (EnergyWire, April 28).

FirstEnergy has warned its generation subsidiary may file for bankruptcy if its facilities are not re-regulated (EnergyWire, Nov. 7). AEP has announced plans to sell 5,200 megawatts of coal power and wrote down the value of its remaining generating assets, many of them coal units, by $2.3 billion (EnergyWire, Nov. 2). The Columbus-based utility has nonetheless said it would also pursue re-regulation.

"If they were to be re-regulated, that would save those plants," said Swami Venkataraman, senior vice president at Moody’s Investors Service Inc. "If nothing changes, a lot of these assets are vulnerable to being shut down."

The utilities’ calls have yet to translate into a bill in Columbus, though observers said it is possible a proposal could emerge before the year is out.

The debate is more advanced in Michigan, where the state Senate advanced an energy package earlier this month (EnergyWire, Nov. 14). The measures include an increase in the state’s renewable portfolio standard, from 10 to 15 percent, and provides the state’s utilities with greater incentives to implement energy efficiency measures.

But it has generated more controversy over its potential impact to Michigan’s hybrid power market. Today, roughly 90 percent of Michigan’s power comes from vertically integrated utilities. The remaining 10 percent is provided by independent producers that sell power in a competitive market.

The bill would require independent producers to effectively guarantee their power supply. Supporters say the move is necessary to ensure reliability. Some 1,900 MW of coal capacity was retired this year, and almost 1,000 MW will be retired by 2020.

"Michigan has to solve its reliability problems, and it has to solve them now," said Valerie Brader, executive director of the Michigan Agency for Energy. "We used to be well above our reliability reserve margin. We now actually require imports to meet those requirements."

Some Republicans remain unconvinced, however. Critics have repeatedly pointed to the state’s school districts, many of which buy electricity from independent producers, saying they will be saddled with higher bills. The bill also would pave the way for state regulators to impose fixed charges on rooftop solar users.

State Rep. Gary Glenn (R), the vice chairman of the House Energy Policy Committee, said he believes the state should completely deregulate its electricity market. A competitive market would save consumers money and spur construction of less expensive natural gas and renewable facilities.

"I can’t imagine why a Republican Legislature would rush to lock us in to a Granholm-type model of mandates and monopolies at the very time when a President Trump may relax the regulatory scheme," Glenn said, referencing to the state’s former Democratic governor, Jennifer Granholm.

Glenn has found common cause with greens, who are opposed to fixed charges on residential solar customers and question calls for new power capacity. Michigan has long boasted surplus power capacity, they say.

The current package would do the minimum in greening Michigan’s grid, said James Clift, policy director of the Michigan Environmental Council.

The state should instead ensure a competitive bidding process for new generation proposals and promote further energy efficiency measures, he argued.

There is one area of agreement. No matter what lawmakers decide, Michigan will likely burn less coal.

"The bottom line is that Michigan will be making new investments in either new generation or imported power," said David Young, an analyst for the Electric Power Research Institute.

Coal’s replacement will ultimately depend in great measure on what lawmakers decide.