With Romney’s support, GOP has votes to take up Trump pick 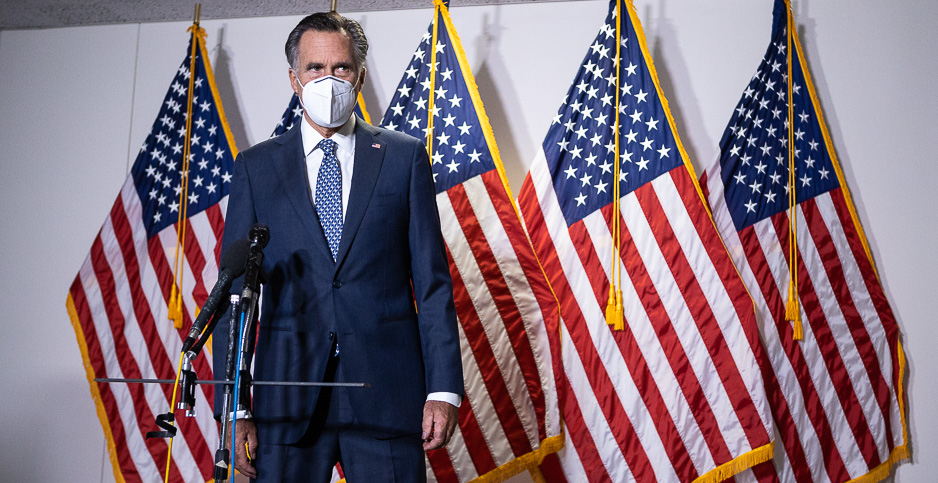 Senate Republicans have the votes to move ahead with the nomination of a Supreme Court justice to replace the late Ruth Bader Ginsburg, after Utah Republican Mitt Romney said this morning he won’t try to block the nominee amid the presidential election.

"I intend to follow the Constitution and precedent in considering the president’s nominee. If the nominee reaches the Senate floor, I intend to vote based upon their qualifications," said Romney, the party’s 2012 presidential nominee, who has at times shown a willingness to break with President Trump.

Republicans have a 53-member majority in the Senate, but two GOP senators — Energy and Natural Resources Chairwoman Lisa Murkowski of Alaska and Susan Collins of Maine — oppose advancing the nomination so close to the Nov. 3 election.

With all Democrats ready to block action, four GOP defections could have scuttled the confirmation before the election, but that is now not possible with Romney’s support to move ahead.

Sen. Dick Durbin (D-Ill.), a senior Judiciary Committee member, told reporters he was "disappointed" with Romney’s decision and said Democrats could "slow things down but can’t stop" Republicans from holding a vote — even one before the election.

Durbin said Democrats should focus on the nominee’s record to highlight positions that would be of concern to voters, particularly on health care amid the pandemic.

Senate leaders have yet to settle on timing for considering a Trump pick, and the president is not expected to announce his choice until after Ginsburg’s funeral, on Friday or Saturday.

The president has said his pick will be a woman, and the top contenders are federal appeals court Judges Amy Coney Barrett and Barbara Lagoa.

Senate Majority Whip John Thune (R-S.D.) told reporters this morning he believes GOP senators are "very supportive of the idea of moving forward. In terms of the timing, that’s still up in the air."

He said that the issue would be discussed at today’s Senate Republican caucus lunch but that Majority Leader Mitch McConnell (R-Ky.) will have the final say (E&E Daily, Sept. 22).

Some Republicans, including Judiciary Chairman Lindsey Graham of South Carolina, have called for holding the vote ahead of the elections, an aggressive time frame that would require Senate hearings to go smoothly.

Some in the GOP fear that waiting until after the election for a lame duck could be problematic if Trump loses the White House and Republican senators have less incentive to back the president’s pick.

Romney declined to say whether he would support moving ahead with a lame-duck vote on a court nominee if Democratic presidential nominee Joe Biden wins the White House, telling reporters he did not want to discuss hypotheticals. He also made clear the Trump pick would reshape the court.

"I recognize that we may have a court that has more of a conservative bend than it’s had over the last few decades," Romney said.

"I know a lot of people are saying, ‘Gosh, we don’t want that change.’ I understand the energy associated with that perspective. But it’s also appropriate for a nation that is, if you will, center right to have a court which reflects center-right points."