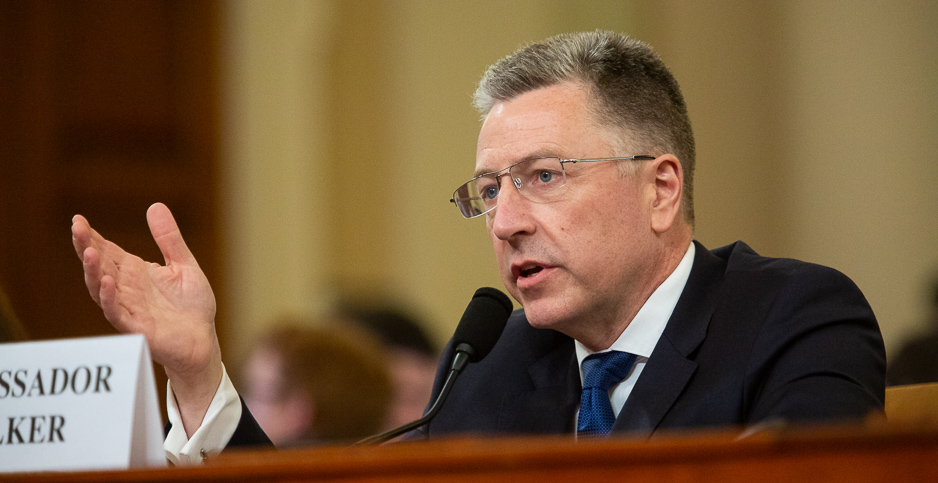 Former Ukraine envoy Kurt Volker said he failed to realize that a push by President Trump to investigate Burisma was a way to go after Biden, a potential rival for the presidency next year. Volker said he wrongly believed there was a "sharp distinction" between the two.

"I should have seen that connection differently, and had I done so, I would have raised my own objections," said Volker.

He told lawmakers he was involved with drafting a proposed statement that would have committed the new Ukraine president to investigating Burisma over what he believed were legitimate corruption concerns.

"In hindsight, I now understand that others saw the idea of investigating possible corruption involving the Ukrainian company, Burisma, as equivalent to investigating former Vice President Biden," he said. "I saw them as very different — the former being appropriate and unremarkable."

The heart of the impeachment inquiry centers on whether Trump held up about $400 million in military assistance to Ukraine until the new administration would agree to investigate the energy firm and ties to the Bidens.

The statement was not issued and the investigation never took root after a whistleblower alerted Congress that the aid was being held up for political reasons, a claim Trump has vigorously denied.

Volker said he never saw any action that the Bidens acted inappropriately. "I have known Vice President Biden for 24 years," Volker said. "He is an honorable man, and I hold him in the highest regard."

Congressional Republicans have repeatedly sought to link Biden to corruption at Burisma and argued Trump was right to seek to root it out.

"Why did Burisma hire Hunter Biden? What did he do for them? And did it affect any actions under the Obama administration," Intelligence Committee ranking member Devin Nunes (R-Calif.) asked rhetorically in his opening statement.

Volker was one of the "three amigos," along with Energy Secretary Rick Perry and U.S. Ambassador to the European Union Gordon Sondland, who coordinated with Trump’s lawyer Rudy Giuliani on Ukraine policy.

Volker, however, disputed the claim of operating outside normal channels with Giuliani. Volker said he, Perry and Sondland were working well within their duties to build support for the Eastern European nation.

Moreover, Volker said he cringes whenever he hears the term "three amigos" and never uses it himself, associating it with former Sens. John McCain (R-Ariz.) and Joe Lieberman (D-Conn.) and Sen. Lindsey Graham (R-S.C.) and their work in Iraq.

Perry, who has declined to testify, was infrequently mentioned during the hearings. When the Department of Energy chief was, he was largely portrayed as interested in reforms in the Ukraine energy sector.

Perry is leaving his post early next month and spent most of the day delivering a farewell address at the U.S. Chamber of Commerce.

But more details could emerge about Perry with Sondland testifying today as well as David Holmes, the political director at the U.S. Embassy in Kyiv, due tomorrow.

In a closed-door deposition released this week, Holmes described the "three amigos" as taking a "very active and unconventional role in formulating our priorities for the new [Ukrainian] administration" and personally reaching out to the new president and his senior team.

Holmes said he never raised concerns with any of the three because of a belief they were involved with "political things that are relevant in U.S. domestic politics, and we stayed out of that."

But David Hale, the undersecretary of state for political affairs, who will testify later today, said in his closed-door deposition that Sondland and Volker, "as a practical matter," would spend more of their time on the "irregular channel" of Ukrainian diplomacy than Perry, who was more focused on running DOE.

An ‘improper’ and ‘unusual’ call

Also yesterday, Army Lt. Col. Andrew Vindman, a Ukraine expert on the National Security Council, and Jennifer Williams, a foreign policy adviser to Vice President Mike Pence, said they had heard about perceptions of conflict of interests between the Bidens and Burisma but never saw evidence of impropriety.

Both Williams and Vindman said they were on an infamous July 25 phone call where Trump pressed the new Ukrainian president, Volodymyr Zelenskiy, to pursue the investigation. Williams called the request "unusual," while Vindman went further, calling it "improper."

Vindman also said Trump specifically referenced Burisma in the call, while the White House’s rough transcript only cites a "company" mentioned by the president. Vindman, however, attributed the difference to a transcription error.

Nunes responded to Williams and Vindman by raising allegations against Burisma without evidence, including that the company had routed $3 million to American accounts controlled by Hunter Biden. The younger Biden served a five-year term on Burisma’s board that ended earlier this year.

Trump for his part continued to scoff at the impeachment hearings yesterday, saying at a Cabinet meeting that House Speaker Nancy Pelosi (D-Calif.) may be delaying votes on a U.S.-Canada-Mexico trade deal until lawmakers agree to vote for his impeachment.