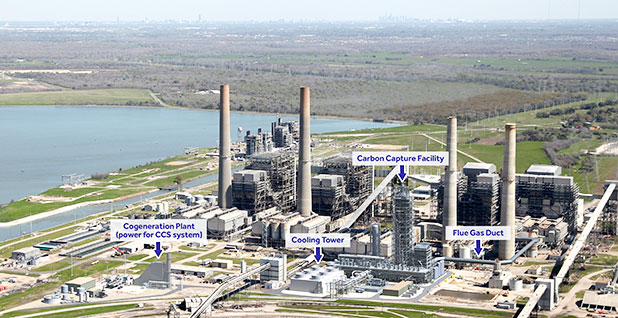 The Petra Nova project near Houston is expected to be the world's largest carbon capture and sequestration project installed on an existing coal plant. It's designed to capture 1.6 million tons of carbon dioxide annually and is operated by Petra Nova Holdings, a joint venture between NRG Energy Inc. and Japan's JX Nippon Oil & Gas Exploration Corp. It's scheduled for completion this year. Photo courtesy of NRG Energy Inc.

On schedule, on budget.

It’s a tall order for any new technology, but for a commercial carbon capture and storage (CCS) system, it might be the start of a revolution.

Systems like Petra Nova that keep carbon dioxide from reaching the atmosphere may become a necessary means to mitigate climate change, and for some utilities, they could offer a lifeline to beleaguered fossil fuel plants.

"We believe that coal plants are an important part of the energy mix of the United States," said David Greeson, vice president for development at NRG Energy Inc. "Our challenge, then, is to mitigate the environmental impacts."

The project received $300 million each from NRG and JX Nippon. NRG also received $167 million from the U.S. Department of Energy’s Clean Coal Power Initiative, plus another $23 million from DOE under Section 313 of the Consolidated Appropriations Act of 2016 for the carbon capture system.

Greeson said Petra Nova is on track in large part due to planning and constraints. The development team worked to iron out the technical issues as much as possible before construction began, using components that were already proven to some extent.

In addition, since NRG is an independent power producer, they have bid into a competitive market. That means they don’t have a captive base of ratepayers, so if the price of power jumps too high, their customers have the option of going elsewhere.

"The technology we’re using is definitely evolutionary, not revolutionary," Greeson said. "We had to execute and know what the deal was going to be before we started."

An example of widespread CCS?

At the plant, a 240-megawatt slipstream of exhaust flue gas flows into the capture system, which will filter out 90 percent of the carbon dioxide, along with particulates, sulfur oxides and nitrogen oxides.

The captured carbon dioxide is pumped 82 miles to the West Ranch oil field in Jackson County, Texas, where drillers inject it into depleted wells, squeezing out the stubborn bits of crude oil that remain after the reservoir is tapped, in a process called enhanced oil recovery (EOR). Drillers estimate that the field holds 60 million barrels that could be recovered with EOR.

The EOR operations will generate the revenue that pays for the CCS system. "We have not impacted the cost of electricity from the plant," Greeson said.

This progress stands in stark contrast to the Kemper County Energy Facility in Mississippi, another high-profile carbon capture project that received DOE funding. Kemper has fallen years behind schedule and has gone billions over budget, with costs rising to $6.8 billion, more than three times the original estimate (EnergyWire, July 28).

Though they serve a similar function, Petra Nova and Kemper are difficult to compare.

"These are very different technologies to start with," said Howard Herzog, a senior research engineer for the Massachusetts Institute of Technology’s Energy Initiative. "The simplest difference is Petra Nova is using pulverized coal and an existing plant. Kemper is using gasification technology, and it’s a new plant."

"It’s not the CCS technology [at Kemper] that’s complicated and novel; it’s the power plant itself," Herzog said. "Nothing like that has ever been built on this scale."

Between the two projects, Petra Nova may be the one that has the more important lesson for coal power in the United States, since it’s a retrofit.

"It demonstrates technology that is directly applicable to existing power plants," said Andrew Hlasko, a senior project manager at DOE. "If you consider that around 35 percent of power generated in the United States is coal-fired, this presents a significant opportunity for application of this technology."

He noted that Petra Nova’s current scale is larger than the initial proposal, a change made to improve the economics of the facility.

"One of the lessons that Petra Nova shows us is to allow for flexibility, to be able to scale the project accordingly to meet the economic viability standards," Hlasko said.

Petra Nova may still face headwinds, since the low price of oil may persist and eat into demand for EOR. But project managers are still carrying on in hopes of meeting their deadline.

"The next milestone in the schedule is to achieve commercial operations by the end of the year," Greeson said.