World’s ‘Third Pole’ is melting away 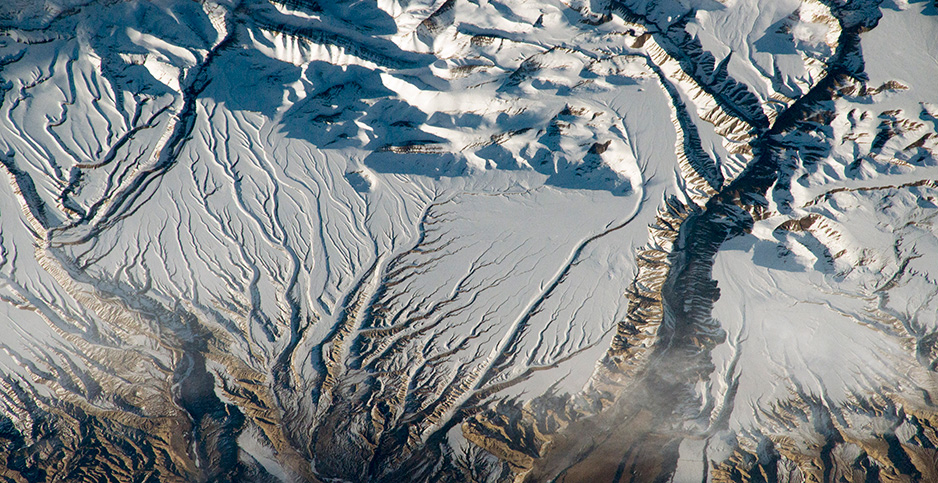 Glaciers in the Hindu Kush mountain range are being affected by climate change. NASA

One of the world’s iciest regions is melting away in the face of climate change, according to a major new report compiled by hundreds of experts.

Glaciers in the Hindu Kush Himalayan region, which spans eight countries in South Asia from Afghanistan to Myanmar, could lose more than a third of their volume by the end of the century — even if world nations meet their most ambitious climate targets. And if greenhouse gas emissions continue at their current levels, the region could lose as much as two-thirds of its ice.

The findings were published today in a 600-page report from the International Centre for Integrated Mountain Development, or ICIMOD, an intergovernmental organization focused on environmental and social change in Hindu Kush Himalaya. The report addressed a variety of issues, from food and water security to air pollution and energy demand.

Its conclusions on the impact of climate change are among its starkest.

"This is the climate crisis you haven’t heard of," said Philippus Wester, an ICIMOD scientist and the report’s lead coordinator, in a statement.

The Hindu Kush Himalayan region is sometimes referred to as the world’s "Third Pole" because it contains so much glacial ice. It’s home to 10 major river basins and some of the world’s highest mountain peaks, including Mount Everest, which straddles the border between Nepal and China.

Around 250 million people live in this mountainous region, and experts estimate another 1.65 billion or so benefit from the water that flows downstream from its rivers. These water supplies are closely dependent on both rainfall during the monsoon season and trickling meltwater from the glaciers, especially during the dry season. That means climate change has the potential to affect a huge population.

"This was flagged as a big black hole of information in the last [Intergovernmental Panel on Climate Change] report that came out," said Joseph Shea, a snow and ice expert at Canada’s University of Northern British Columbia and a co-author of the ICIMOD report. "I think since then there’s been a lot of focus on the area, and this report is trying to synthesize some of that information."

Research suggests that the region is warming faster than the global average, the report notes, which can explain why its glaciers will be so strongly affected in the future.

Average global warming of just 1.5 degrees Celsius — the Paris climate agreement’s most ambitious target — would likely result in about 1.8 C of warming across Hindu Kush Himalaya. And high elevations in the mountains may see temperatures rise more than 2 C, said Arun Shrestha, a climate change specialist with ICIMOD and an editor of the new report.

"The region is quite sensitive," he said.

Recent research has also suggested that local and regional air pollution may be speeding up the melting in some places. Soot, produced from the burning of fossil fuels or biomass, can land on the ice and cause it to become darker in color. As a result, it absorbs more sunlight and heat.

In general, shrinking mountain glaciers anywhere in the world tend to spark concerns about water availability for nearby human communities.

During the warm summer months, meltwater from glaciers tends to run downstream and help fuel nearby streams and rivers. Snowfall during the winter months helps build the ice back up again. But if glaciers are shrinking faster than they can rebuild, the total amount of fresh water they can provide will eventually decline, and the rivers they supply may start to dwindle.

In Hindu Kush Himalaya, some places are likely to be more affected than others. That’s because its river basins are fed by both glacial meltwater and rainfall from monsoons, and in some places the monsoons are the more important source. Some research has also suggested that climate change may actually lead to heavier monsoons, which could help offset some of the vanishing ice.

Because of the large contributions of monsoon rain, overall water flow across the entire region may not actually change much, Shrestha said. Some large river basins, like the Ganges or the Mekong, may remain relatively stable when considered on a large scale.

But specific locations across Hindu Kush Himalaya that rely more heavily on glacier water may be in trouble.

The Indus River is one of the places potentially most at risk, particularly outside the monsoon season, according to Lonnie Thompson, a climate scientist at Ohio State University and a co-chair of the Third Pole Environment program there. A significant portion of its water flow during the dry season — about 40 percent — comes from glacier meltwater.

"Glaciers are like insurance policies which provide water when it is most needed during the dry season and during times of drought," he said in an email to E&E News. "The Indus River and its tributaries rise in the western Himalaya, an area that has undergone a recent increase in temperature and a decrease in precipitation."

Shrestha added that communities at high elevations, located very close to mountain glaciers, may depend more heavily on glacier meltwater.

Preparing for the future

There are other issues to consider, as well.

"I would not say these are very, very frequent events — but they do happen, and when they happen they can be very, very damaging," Shrestha said. Some experts have raised the concern that as glacial melt accelerates, these lakes may form more frequently, increasing the flooding risk.

Scientists have also suggested climate change may be having an impact on both snow and permafrost — the permanently frozen layer of soil found in some cold parts of the world — in the Hindu Kush Himalayan region. But when it comes to snow and permafrost, satellite data, which are largely what scientists have been using to monitor the region’s glaciers, can only go so far.

More on-site monitoring is needed to understand exactly how these aspects of the Third Pole are changing, Shea said. But on-the-ground measurements are difficult to gather consistently in remote, mountainous parts of the world.

Changes to snow and permafrost could have a significant effect on human communities.

As permafrost thaws, for instance, the ground tends to become soggy and soft. That can make it difficult to construct new infrastructure like roads or railways. And it can also increase the likelihood of landslides or falling rocks.

These are issues that will require more monitoring. In general, though, the new report paints an image of a landscape that’s already shifting — and will likely continue to change even under the best possible climate change scenarios.

When it comes to adaptation, one of the big priorities will be determining which areas’ water resources are likely to be most affected by shrinking glaciers and then planning accordingly, said Shea of the University of Northern British Columbia.

"There are a number of things that can be done to reduce the impact that I think the region should and could do," Shrestha said, including improving flood forecasts, early warning systems for extreme weather events and access to insurance. Taking steps to help reduce local air pollution could also help slow some of the melting, even if only in a small way.

"I think … the global community should actually be also kind of helping the region," Shrestha said. "It is [a] resource-intensive thing."

That said, global efforts to reduce greenhouse gas emissions are still the most important action nations can take, according to Shrestha.

"Mitigation actually does work," he added. "The more you can reduce now, the less the consequences will be in the future."