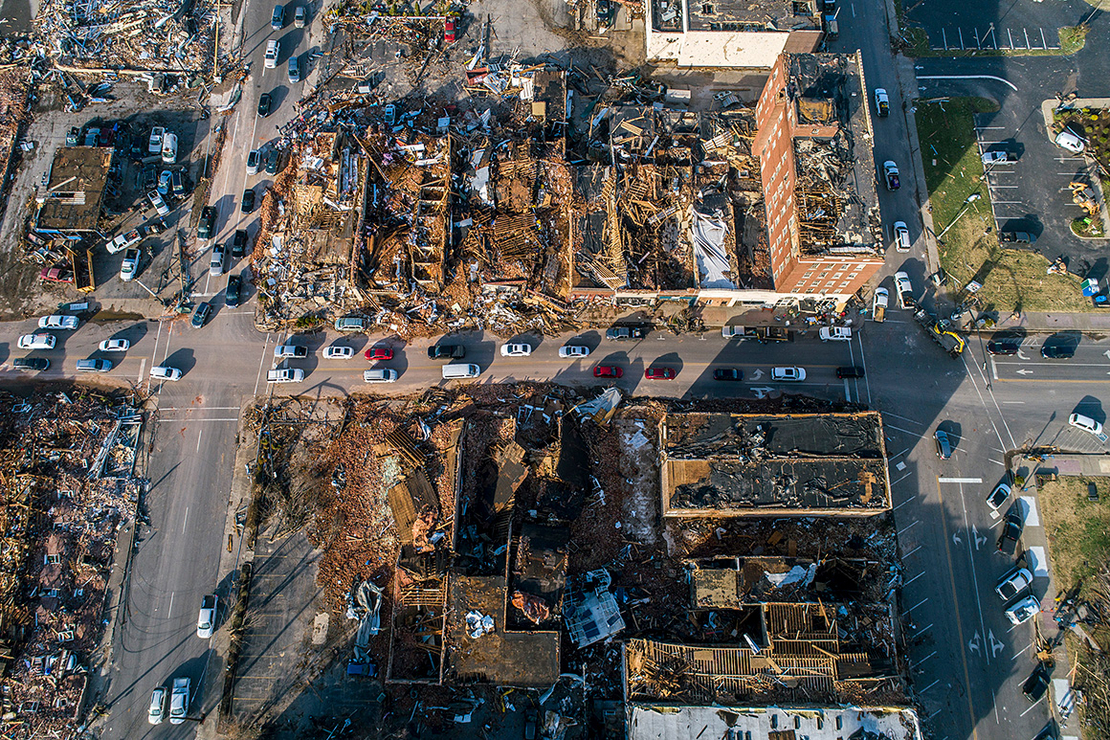 The tornado outbreak that likely killed more than 100 people over the weekend was an anomaly in every way possible.

The deaths were concentrated in a state — Kentucky — that has been relatively unscathed by tornadoes and tornado fatalities.

The outbreak hit during a month when tornadoes are least likely to occur.

And it struck at night, when tornadoes are unusual — and particularly deadly because people are asleep and unlikely to hear warnings.

“The worst-case scenario happened — warm air in the cold season, middle of the night,” John Gordon, the National Weather Service chief meteorologist in Louisville, said at a briefing Saturday with Kentucky Gov. Andy Beshear (D). “This sickens me to see what has happened.”

Although the exact death toll remains unknown, the outbreak is almost certain to be the deadliest since the devastating Joplin, Mo., tornadoes killed 158 people in May 2011. It’s likely to be one of the deadliest tornado events in U.S. history.

Beshear said at least 80 people were killed in Kentucky and the state’s death toll “is going to exceed 100.”

Six people were killed early Friday night when a tornado blew down the walls of an Amazon warehouse in southwestern Illinois. Deaths also were reported in Arkansas — where the outbreak began late Friday afternoon — and in Missouri and Tennessee.

The outbreak is certainly the deadliest to have occurred in the United States during a winter month, according to an E&E News analysis of NOAA tornado records dating to 1950. The deadliest recorded December tornado occurred in 1953 in Mississippi and killed 38 people, NOAA records show.

December and January are by far the least active months for tornadoes in the United States while April and May are the most active, NOAA records show.

“At this magnitude, I don’t think we have ever seen one this late in the year,” Federal Emergency Management Agency Administrator Deanne Criswell said Sunday on CNN’s "State of the Union." “The severity and the amount of time this tornado or these tornadoes spent on the ground is unprecedented.”

“It’s going to be a long recovery,” Criswell told ABC’s "This Week."

The tornadoes come at the end of another year of huge destruction from natural disasters. Hurricane Ida caused $65 billion in damage and killed 96 people as it swept from Louisiana to New York. A February cold snap in Texas caused massive power outages, $21 billion in damage and 172 deaths.

The worst year for billion-dollar disasters was last year, when NOAA recorded 22 events.

The length of the tornado outbreak astonished meteorologists, who measured one tornado stretching 227 miles as it blasted from Arkansas northeast into Missouri and Tennessee before cutting a swath of destruction through northwest Kentucky. Tornadoes are rarely more than 15 miles long and generally last less than 10 minutes.

The devastation overwhelmed Kentucky communities and officials unaccustomed to tornadoes.

“There are just entire swaths of Mayfield that just aren’t there anymore at all,” Kentucky state Sen. Whitney Westerfield (R) said Saturday on CNN. “Someone described it as a scene from World War II. Bombing raids that you’d see in old footage, and that’s exactly what it looks like. There’s just nothing left of the place.”

Much remains unknown about the recent tornadoes including their strength, number and cause.

“The weather community will spend years and probably decades trying to decipher the why,” Evan Bentley of NOAA’s Storm Prediction Center in Oklahoma wrote yesterday on Twitter.

The unusual timing and location of the outbreak is raising questions about the influence of weather and climate change. Record temperatures were recorded Friday in most Gulf Coast states as well as in the parts of Arkansas, Missouri, Tennessee and Kentucky where the tornado hit.

Meteorologists said the warm weather likely contributed to the tornadoes, which result from atmospheric instability that is created when dry, cold air is pushed over warm, humid air and generates an updraft.

“It was really a late spring type of setup in the middle of December,” Northern Illinois University professor Victor Gensini, a leading tornado researcher, told the Associated Press.

Meteorologists cautioned against attributing the outbreak to climate change as officials, including President Biden, sought to draw a connection.

Speaking to reporters Saturday in Delaware , Biden was asked if climate change influenced the outbreak.

“All that I know is that the intensity of the weather across the board has some impact as a consequence of the warming of the planet and the climate change,” Biden replied. “The specific impact on these specific storms, I can’t say at this point."

“But the fact is that we all know everything is more intense when the climate is warming — everything,” Biden added. “And obviously it has some impact here, but I can’t give you a quantitative read on that.”

Just before Biden began speaking, Gensini reposted on Twitter a thread he wrote originally in May 2019 stating: “No, climate change did not cause the recent rash of US tornadoes. Climate change does not cause any given extreme weather event.”

The National Climate Assessment published in 2018 says that tornadoes along with winter storms and hurricanes are “exhibiting changes that have been linked to climate change.” But, the report adds, “the current state of the science does not yet permit detailed understanding.”

The outbreak seems to reflect a geographic shift that researchers have documented in tornado activity away from the Great Plains region known as Tornado Alley.

Deaths are increasingly occurring in the Southeast in a region some analysts call Dixie Alley, which includes Alabama, Arkansas, Georgia, Louisiana, Mississippi and Tennessee.

Kansas, once the epicenter of tornado activity and home to legendary tornado survivor and Land of Oz visitor Dorothy Gale, has not had a tornado death since Feb. 28, 2012.

Kentucky has not been part of the trend of tornado migration, although it shares the geographic and housing characteristics of many Dixie Alley states.

There have been 918 tornadoes recorded in Kentucky since 1950, which ranks 19th among U.S. states, according to E&E News’ analysis. The analysis includes only tornadoes with wind speeds of at least 86 mph, or a score of 1 on the Enhanced Fujita Scale that categorizes tornadoes according to their speed.

Until this weekend, the number of tornado deaths in Kentucky was 148, which ranks 16th among states.