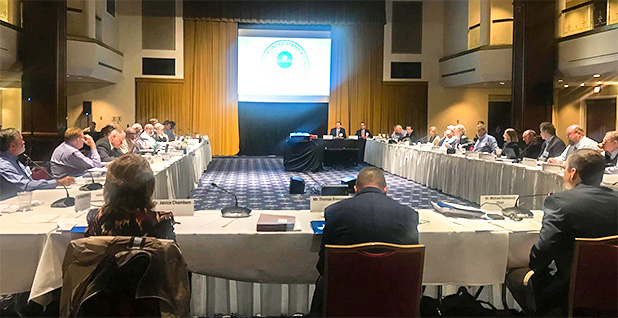 Members of EPA’s Science Advisory Board grappled with whether and how to weigh in on the Trump administration’s rollback of clean water standards given the administration’s insistence that the proposal is a question of policy, not science.

"They have the right to change the policy, but the science isn’t right," member Robert Merritt said.

The "Waters of the U.S." proposal from EPA and the Army Corps of Engineers would erase Clean Water Act protections for wetlands without surface water connections to larger waterways and streams that only flow following rainfall. At least some federal protections for those waters have been in place since the Reagan administration.

The Science Advisory Board last addressed questions of Clean Water Act jurisdiction in 2014, reviewing and supporting a 300-page "connectivity report" describing how wetlands and small waterways can affect larger resources. The Obama administration used that report, and the board’s review, as the basis for its Clean Water Rule, but the Trump administration has insisted that its rollback does not need to be based in science.

"I’ll note that the proposed revised definition is a legal and policy decision that is informed by the statute, legislative history, Supreme Court interpretations and the EPA and Department of Army’s respect for the traditional power of the states to regulate their inland water resources," EPA Director of Wetlands, Oceans and Watersheds John Goodin told the board today. "The line between federal and state waters is informed by, though not dictated by, science."

That left EPA’s science advisers questioning how to handle the situation, particularly because the group still stands by its 2014 scientific review.

"That’s what makes this tricky, because while the science hasn’t changed, it doesn’t seem to be entirely relevant to the way EPA is reviewing this," Deborah Hall Bennett, an SAB member and a professor in environmental health at the University of California, Davis, said of the WOTUS proposal.

A working group tasked with reviewing WOTUS acknowledged EPA’s position but still determined: "In reviewing the proposed rule we find that there are some gaps between science and policy that warrant review and bridging."

Those gaps include the significant water quality and filtering benefits that wetlands and streams that flow only after rainfall can have on larger downstream waterways.

However, members of the larger board seemed unsure of what they could do, given EPA’s position.

"If we consider the four questions the work group raised, then what would be the impact?" asked SAB member Sue Marty of DowDuPont Inc. "Wouldn’t the policy proposal move forward because it is a policy decision?"

University of Washington environmental scientist Alison Cullen, who chaired the work group, said she wasn’t sure whether the advisory board could influence an EPA policy decision but noted that the "gaps" in the WOTUS proposal are things the agencies had asked for public comment on.

"Certainly the Science Advisory Board should at least have a footing with the public comments being considered, if not hopefully a little more cachet," she said. But, she added, "I don’t think we pick and choose the issues we weigh in on based on if they are going to use our science. We provide the science; we don’t say, ‘This is how you should use it.’"

Given that the science hadn’t changed, however, SAB member Anne Smith said she wasn’t sure what the board could say if it did weigh in.

"I’m perplexed by the situation we put ourselves in, because the board did a review in [2014], and I haven’t heard anybody say that anything has changed," she said, suggesting that the board resubmit its approval of the connectivity report. "The difference between then and now is not about scientific information; it’s about policy."

Ultimately, the board voted to write a "commentary" to EPA explaining the science at issue in the WOTUS rule, a solution proposed by the board’s chair, Michael Honeycutt, of the Texas Commission on Environmental Quality.

"What I’m hearing is that the Clean Water Act says something that the science has surpassed, and we are trying to fit a square peg into a round hole," he said. "I see the position EPA is in. It’s sort of like a cycle, and you’re trying to draw a line of where the cycle begins, and it’s very difficult to do. Your policy is drawing that line, and it’s an unenviable position to be in."

Steven Hamburg, of the Environmental Defense Fund, agreed to the commentary but cautioned against "just putting a new cover letter" on old comments.

While the science hasn’t changed, he said, "the context has changed."

"We need to address the new set of options that are on the table," he said.

Board members spent some time discussing the working group’s recommendations for WOTUS. Those include that EPA and the Army Corps should consider the "scientific basis" for excluding ephemeral waters that flow only after rainfall and wetlands without a direct surface water connection to larger waters. The group also recommends considering "the scientific importance of groundwater protection and groundwater," noting that the WOTUS proposal would protect spring-fed creeks but not isolated waters or wetlands with shallow subsurface groundwater to larger waterways that have previously been protected.

Consultant Richard Williams asked whether those recommendations were based on how waterways are connected or "what the risk was, basically, of including or excluding it."

Hamburg explained that the analysis stuck to how wetlands and streams are connected to larger water bodies, largely because of how the Clean Water Act is framed. But he stressed the importance of not focusing on the impact one ephemeral stream or wetland might have on a larger water body.

"One might be very small, but the collective influence is very large and tends to drive the chemistry as well as the hydrology of these systems," he said.