WOTUS ‘ultimately doomed.’ What happens next? 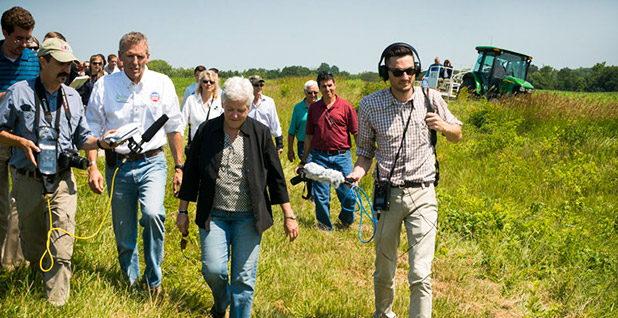 Dozens of lawsuits and a nationwide stay halted U.S. EPA and the Army Corps of Engineers’ plans to implement the new standards on the ground.

At the same time, congressional opponents and industry groups continued to paint the rule as invasive, hastily written and illegal.

With Donald Trump’s promise to pull the plug on the measure, it’s only a matter time before it dies, say observers. "I think this rule is ultimately doomed," Vermont Law School professor Pat Parenteau said in an email.

During his campaign, President-elect Trump vowed to repeal the regulation, which redefines which water bodies are automatically covered under the Clean Water Act.

EPA and the Army Corps crafted it to clarify the extent of protection for small wetlands and streams that lead to rivers, lakes and bays, after two Supreme Court decisions in 2001 and 2006 muddled the limits of federal jurisdiction.

As it stands, the Army Corps makes case-by-case determinations of what is federally protected and what isn’t, a practice that environmentalists say leaves waterways vulnerable to pollution.

Industry critics panned the so-called Clean Water Rule when the administration proposed it and then finalized it last year, saying its definitions and limits amounted to broad federal overreach over private land and states’ rights.

The measure — also known as the Waters of the U.S. rule, or WOTUS — is under scrutiny by the 6th U.S. Circuit Court of Appeals, with oral arguments expected as soon as next spring.

Trump could request a voluntary remand before the court makes a decision, Parenteau said. In that case, the court would have to agree to return the rule to the agency and give a legal justification.

That justification could come from the Supreme Court’s recent decision in Army Corps of Engineers v. Hawkes Co. Inc., where justices said landowners could sue the government over federal wetlands determinations.

Justice Anthony Kennedy wrote in his opinion that "the reach and systemic consequences of the Clean Water Act remain a cause for concern," which many saw as a direct jab to the Clean Water Rule (Greenwire, May 31).

The 6th Circuit could also issue a decision on the rule next year, either vacating it or sending it back for a rewrite.

In that case, the new administration could do nothing or could choose to promulgate a new rule or guidance to replace the Obama regulation.

A Republican Congress could gut the Clean Water Rule via legislation or by defunding EPA’s activities in spending bills.

Senate Republicans still will lack a 60-vote majority to overcome a filibuster but will not have to contend with a veto as they did under President Obama.

The White House blocked a congressional resolution to dismantle the rule in January. Proponents then failed to get the 60 votes necessary to override the veto (Greenwire, Jan. 21).

A new rulemaking under the Republican president could help people and businesses affected by the rule obtain more clarity, said Brooks Smith, an environmental attorney with Troutman Sanders LLP who represents industry opponents.

"I think the Clean Water Rule is dead, but it will need to be replaced with something that provides the kind of certainty and clarity and predictability that was supposed to come with the rule and really didn’t," Smith said.

Smith said a rule would be preferable to less-rigorous guidance. "I think there’s general consensus that this is such an important demarcation of federal power that it needs to be formal, it needs to be a rule," he said.

If WOTUS dies, Smith said there could be intermediate guidance or a policy for regulators on the ground while EPA and the Army Corps work on a new rule.

The 6th Circuit’s opinion will be important in setting guideposts for how the new administration will address the next steps, said Jon Devine, senior attorney with the Natural Resources Defense Council’s water program. If the judges weigh in on the importance of protecting waterways, that could place impositions on a new rule.

"If the court were to say that a certain level of protection is required, then that would be a constraint on how much the [Trump] administration can change it," he said.

Revoking the rule may have been an effective talking point in the campaign, but it won’t be quick or easy, said Andrew Stewart, an attorney with Vinson and Elkins LLP and a former director in EPA’s Office of Civil Enforcement. Rescinding a regulation or crafting a new one will have to be based on a foolproof record.

"To modify the rule in a way that is defensible and could survive judicial scrutiny, that takes an administrative record," said Stewart. It would require scientific and technical information that invalidates the Obama administration’s findings or a different interpretation of the law that is upheld.

Environmental groups are aware that revoking the Clean Water Rule will be easier said than done, and they have said they will use the notice and comment period for a new one to challenge attempts to weaken clean water protection.

"We’ll make sure we fight a rollback," Devine said.

The future of the rule also hinges on who will lead EPA under Trump, particularly the Office of Water. Sam Clovis, a top adviser to the president-elect’s campaign, has said Trump was looking for someone with an agricultural background to direct the agency (Greenwire, Sept. 30).

Farming and ranching groups, particularly the American Farm Bureau Federation, have lambasted WOTUS and said its definition of "tributary" would broadly include many land features.

Even though Trump won’t likely pick a water chief in the first months of his administration, some early names for the post include Bruce Rastetter, an agriculture entrepreneur from Iowa, and Georgia Agriculture Commissioner Gary Black.

"Bringing in a farmer (a smart one) makes lots of sense," said an agricultural trade group source. "Tougher to attack a farmer than an oil [and] gas or coal lawyer."