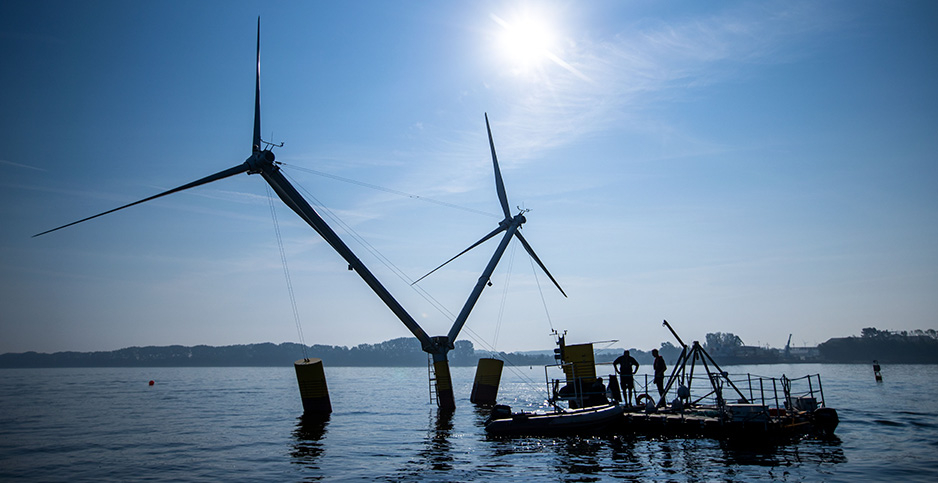 Fitters anchor the model of a floating wind turbine off the coast of Vierow, Germany. Backers of the nascent technology see an opportunity for offshore wind in deep waters off California's coast — particularly if Democratic presidential nominee Joe Biden is elected. Jens Büttner/dpa/picture-alliance/Newscom

Offshore wind supporters say Democratic presidential nominee Joe Biden could be a deciding factor in a long-standing battle if he’s elected: bringing the first turbines to the West Coast.

The idea of mooring turbines onto floating platforms in California’s deep waters has been in the works since the Obama administration, when Interior Department officials responded to unsolicited proposals from wind companies by mapping three potential areas for turbine construction and asking for comment on their viability. If completed, the plan could have major implications for the state’s emission profile and the offshore wind industry, which to date has largely been focused along the U.S. East Coast.

Under the Trump administration, the military has repeatedly objected to development in two of the mapped California areas, located off California’s central and southern coastlines.

Over the past year, Department of Defense officials have joined a working group with a California congressman and state agencies to assess the issue. While some say privately the group is close to a breakthrough that would allow turbine construction to go forward, others are becoming increasingly vocal against the prospect of a new industry in Pacific waters.

But if Joe Biden were to take over as commander in chief, some industry advocates say, California could become a new national hub for offshore wind, producing more power from it than any other state.

A Biden White House, they say, could direct the departments of Defense and the Interior to prioritize a compromise over development of central coast waters and move quickly to auction off leases there and in Northern California waters, where the military hasn’t raised objections.

"I think under a Biden administration, a more constructive dialogue would occur between the state and the federal government," said Liz Burdock, president of the Business Network for Offshore Wind.

She added that a Biden presidency could also create federal teams that oversee problems facing the nascent industry, including future issues with grid capacity on the East Coast, and start planning for future auctions in new areas.

The Biden campaign did not answer inquiries from E&E News, but the candidate’s climate plan promises a goal of "doubling offshore wind by 2030" on the route to a 100% clean power sector. For industry observers, that target would likely have to include the West Coast, along with planned projects in the East.

Significant hurdles would remain regardless of who’s in the White House, however. Fishermen’s groups are becoming more united in their skepticism, raising the prospect that they could slow development — as they did by successfully appealing to the Trump administration for a several-month review of the industry’s impacts along the Atlantic coast.

And the military’s support for turbines in central California waters would likely continue to hinge on one condition — a law banning future offshore wind development in the waters outside that region. No such law has been introduced, but Defense officials say turbines could conflict with military radar and activities that include live-fire exercises.

Rep. Salud Carbajal (D-Calif.), who convened the offshore wind working group with Defense, the Interior and California agencies, said he believes Biden would have "a higher interest and priority in renewable energy that could lend itself to being more supportive" of offshore wind in his state.

"But," he added, "I’m trying to minimize the politics of this. I’d rather focus on the need for renewable energy."

The waters off Carbajal’s central coast district hold the key to the state’s broader offshore wind development. Unlike in Southern California, the military is open to negotiating. Two nuclear plants are also set to close there in the coming years, offering a high-capacity connection to the grid even as they make large-scale job losses likely.

The congressman’s working group is trying to identify areas where turbines could coexist with military operations.

After a newly appointed Navy official this spring suggested that the department no longer saw a path forward for negotiations, Carbajal filed an amendment to the National Defense Authorization Act that would cut the Navy out of discussions (Energywire, July 16).

That amendment remains in the bill, which has been held up by President Trump’s veto threat due to a provision that renames military bases that bear the names of Confederate generals. Lawmakers don’t plan to move the legislation until after the election.

But in a letter delivered to Carbajal this month, the Navy’s top official signaled that a misunderstanding had occurred, writing that the Trump administration would support the working group’s negotiations as before.

Wind energy in a previously outlined area of central California waters was "a risk we have assessed as acceptable," as long as further wind development was banned from other military operating areas, wrote Secretary of the Navy Kenneth Braithwaite.

"I look forward to working with you to identify a solution and offering support where we can to help resolve this to all parties’ satisfaction," he wrote.

Carbajal called the earlier disagreement a "small hiccup" and said other Defense and Interior officials had worked "in good faith" — although he wouldn’t guarantee the amendment’s removal from the bill, which has already passed the House and would require the signoff of Senate lawmakers.

The working group’s latest vision of a California offshore wind industry, meanwhile, was panned by much of the state’s energy world, suggesting that federal leadership in the future could be a pivotal factor.

A map released in February proposed opening up new swaths of the Pacific Ocean, located adjacent to the Interior Department’s initial "call area" but closer to shore. Parts of the newly proposed zones were also located in the Monterey Bay National Marine Sanctuary (Energywire, Feb. 20).

In an outreach period that ended Sept. 30, groups ranging from environmentalists and labor to the state’s marine sanctuary authorities rejected turbine construction in those new zones, saying it would unnecessarily endanger marine life in protected areas. Real estate interests balked at siting turbines well within view of shore. And fishing interests warned wind projects there would displace more fishermen than in alternative areas sketched out by Interior officials.

Comments also hinted that the fishing industry — the East Coast’s chief source of opposition to offshore wind — may be preparing a more confrontational stance in California.

The Pacific Fishery Management Council, which includes federal wildlife officials, predicted that offshore wind would bring "major cumulative effects" to the West Coast’s fisheries, echoing a finding from Interior’s review of impacts off the East Coast.

Released in draft form in June, the large-scale review looked into how an offshore wind industry might affect other ocean users and marine wildlife across the East Coast’s waters.

One group that led the campaign for the review, the Responsible Offshore Development Alliance, has also formed a Pacific Coast chapter.

In a letter last month to California energy officials, the group criticized the fishing industry’s exclusion from the working group’s negotiations and wrote that three to five years of data on fishing stocks should be collected before the construction of turbines — a timeline that "[does] not correspond with the projected pace of [offshore wind] development off of California."

Despite the pushback, developers and offshore wind advocates say they believe a consensus may be taking shape from the working group’s labors.

The same central coast areas that had already been identified by Interior several years ago, they say, had netted few major conflicts apart from the military’s activities.

With those close to being resolved, they say, Interior officials could soon find a clear path to leasing out those waters — regardless of who sits in the Oval Office.

"It looks like the path to ‘yes,’ or the sweet spot with the least conflicts in the region, is right where [the Bureau of Ocean Energy Management] had originally recommended," said Adam Stern, executive director of Offshore Wind California, a trade group whose members include large developers like Ørsted A/S and Equinor ASA.

Still, some within the industry reason that Biden’s campaign pledges mean his administration would move more quickly to auction off areas, both on the central coast and in Northern California, and eliminate permitting backlogs more efficiently for turbine projects.

Doing so would gel with the deepening political will in California to pass new clean energy policies, they say. Advocates want the state’s energy officials to plan for at least 10 gigawatts of offshore wind, a target that would top even the 9 GW projected by New York.

The devastating fire season and August power outages in California have helped make the case for a new renewable industry, they say.

In a study funded by Interior and published last month, researchers at California Polytechnic State University found that central coast offshore turbines would be useful during peak times, since winds there often kick up during evening hours and in the summer, when demand for energy is high and onshore renewables produce less power.

That would appear to align with the findings of a separate report released this week by California energy authorities, grid operators and utility regulators, who said the state had failed to ensure it had sufficient electricity during evening hours when solar panels go offline.

The Cal Poly study "confirmed what we’ve been saying for a long time — that the profile of the resource matches the demand," said Alla Weinstein, chief executive of a joint venture that is looking to produce power from central coast turbines.

"The demand continues to go up for clean power, and you have to get it somewhere. There are only so many sources of generation," she added. "One way or another, I do believe offshore wind is going to happen in California."