Would Biden pick the ‘queen of green’ to lead EPA? 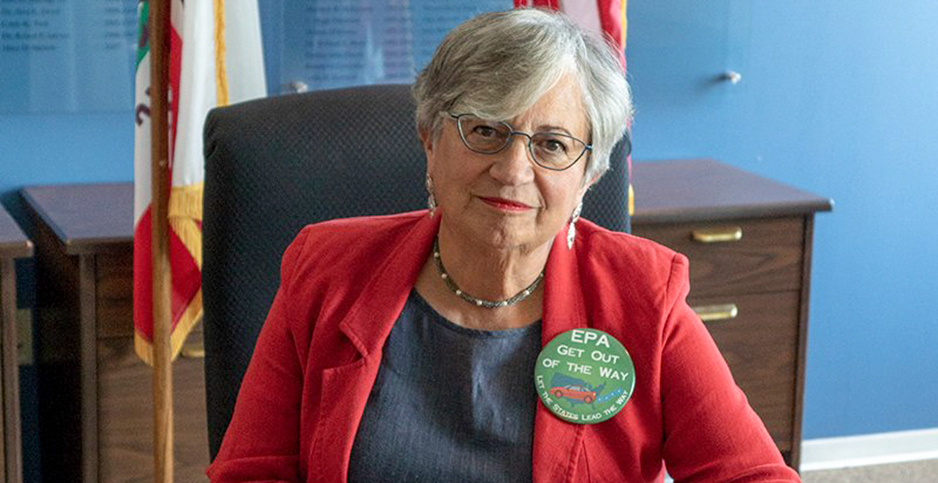 Mary Nichols, chair of the California Air Resources Board, could be the next EPA administrator if Joe Biden is elected president. @MaryNicholsCA/Twitter

If Joe Biden wins the presidential election, allies say he should pick an EPA administrator who can boost morale at the agency and craft aggressive regulations to fight climate change.

Few are better prepared for that work than California regulator Mary Nichols, according to former colleagues and officials.

Since 2007, Nichols has served as chairwoman of the California Air Resources Board (CARB), the main air pollution regulator in the Golden State.

In that role, the so-called queen of green has presided over the development of tough tailpipe pollution rules for passenger cars, as well as a first-in-the-nation electric truck rule (Climatewire, June 26).

Nichols, 75, has also publicly clashed with the Trump administration over its rollback of clean car standards and revocation of California’s Clean Air Act waiver for greenhouse gases.

"In my view, Mary has the unique skills and experience that should put her at the top on the list that Vice President Biden should consider," said Margo Oge, the former head of EPA’s transportation office.

"Given the 3 ½ years of the awful and damaging actions under the Trump administration, I think you’re going to need an EPA administrator who understands not just the laws, but also the agency. And I think Mary fits that," Oge added.

Alan Lloyd, a former chair of CARB and former secretary of the California EPA, echoed that sentiment.

Nichols is "a seasoned pro. I have the utmost respect for her. The country would be lucky to have her," said Lloyd, who is now a senior research fellow at the University of Texas, Austin’s Energy Institute.

"The transition team is cultivating names who will serve in senior posts, including EPA administrator, and other top positions at the agency," a Democratic consultant who works with environmental groups previously told E&E News (Greenwire, Aug. 24).

They include Nichols; Washington Gov. Jay Inslee (D), who ran for president with a heavy focus on climate change; Heather McTeer Toney, the former mayor of Greenville, Miss., and ex-EPA Region 4 administrator who is now national field director for Moms Clean Air Force; and Daniel Esty, the former head of the Connecticut Department of Energy and Environmental Protection, who now teaches environmental law at Yale University.

Oge said Nichols has more relevant experience than some of the other people discussed for the EPA job, given California’s leadership on environmental issues.

"Environmental commissioners have the state experience. But they haven’t had the responsibilities that Mary has, which is really leading an agency that very often has been ahead of the federal government when it comes to reducing pollution," she said.

Nichols was not available for a phone interview this week, as she was working to help prevent blackouts amid the wildfires sweeping across California. The Golden State has seen the second- and third-largest wildfires in its history this month, with more than 1.1 million acres burning and roughly 100,000 people forced to evacuate.

In an email to E&E News, Nichols declined to say whether she would accept an offer to serve as EPA administrator in a Biden administration, pointing to the pool of qualified candidates.

"I really have nothing to say at this point. We have to put an end to the Trump presidency if we are to have any hope of averting climate catastrophe and improving environmental health in our most impacted communities. We have a large pool of talent in states, cities and the non-governmental sector who are ready to assist a new Administration," she wrote in the email.

Nichols is no stranger to EPA.

In 1993, she was confirmed by the Senate to serve as the agency’s assistant administrator for air and radiation under President Clinton.

"In my mind, one of the most important things that Mary did in the mid-1990s was convincing Carol Browner to announce the first PM2.5 health standard along with the ozone standard. Obviously, that was very successful," said Oge, who was head of EPA’s transportation office at the time.

When President Obama was searching for his first EPA administrator in 2008, Nichols was one of two final contenders who were personally interviewed by the president, according to one person familiar with the Obama team’s vetting process.

But the position ultimately went to Lisa Jackson, the former commissioner of the New Jersey Department of Environmental Protection, who seemed more enthusiastic about moving to Washington and leading EPA, that person said.

It’s an open question whether Nichols would be willing to relocate to Washington to serve in a Biden administration. She has indicated plans to step down from CARB after her term as chair ends in December. But she has given little hint of what lies ahead.

One flap that could resurface if Nichols advances in the EPA chief sweepstakes is her past comments comparing police brutality and air pollution.

"’I can’t breathe’ speaks to police violence, but it also applies to the struggle for clean air. Environmental racism is just one form of racism. It’s all toxic," Nichols wrote on Twitter in June, using the phrase associated with George Floyd’s death in police custody in Minneapolis.

Nichols later deleted the tweet and apologized, but not before California Assembly Member Jim Cooper (D) criticized her in several tweets, saying, "How dare you use a dying man’s plea for help as a way to discuss your agenda. Have you no shame?"

One factor that could draw Nichols back to Washington: clean car standards.

Earlier this year, the Trump administration finalized its rollback of the clean car standards established by Obama. Nichols has emerged as perhaps the most prominent critic of the rollback, which would revoke California’s unique authority to set tougher tailpipe pollution rules than those issued by the federal government.

She’s also emerged as a thorn in the side of EPA Administrator Andrew Wheeler.

In June of last year, Wheeler sent a letter to Republicans on the House Energy and Commerce Committee accusing Nichols of negotiating in bad faith over the rollback (Greenwire, June 20, 2019).

Nichols fired back in impassioned testimony before the committee, asserting that "the Trump administration has been unwilling to find a way that works" with regard to the auto emissions rules (E&E Daily, June 21, 2019).

For those who have worked with her, the testimony was emblematic of Nichols’ character.

A tough negotiator, Nichols is known for never backing away from confrontation — and for bringing homemade cookies to particularly tense meetings (Greenwire, Aug. 17, 2018).

"She has thick skin, but not too thick, meaning that she can take the slings and arrows and stand up to anyone," said Dan Sperling, director of the Institution of Transportation Studies at the University of California, Davis, and a member of the 16-person CARB.

"She would be perfect for the Biden administration," he added.