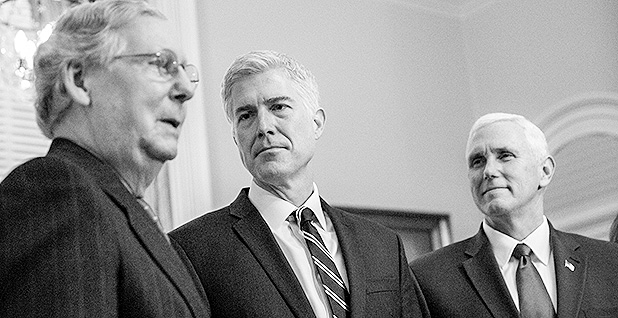 Gorsuch’s views on Chevron would likely color how he would rule on cases involving environmental regulations. As a result, it would likely be harder for federal agencies to convince the high court that their interpretations of laws are the correct ones, legal experts predicted.

But despite Gorsuch’s strong views on the doctrine, it’s probably too early to herald the demise of Chevron.

"We’re not going to get anywhere where a court simply ignores agency interpretations," said Patrick Parenteau, a law professor at Vermont Law School. "I can’t imagine a day when the court simply says, ‘Oh, that’s not relevant.’"

As a judge, Gorsuch has ruled on a few environmental and energy cases. But it’s a concurring opinion on the Chevron doctrine in a case involving undocumented immigrants that has attracted the most attention in environmental law circles.

In August 2016, Gorsuch wrote in his scathing, 23-page concurring opinion that Chevron was a "judge-made doctrine for the abdication of judicial duty" and a "goliath of modern administrative law" that’s "more than a little difficult to square" with the Founding Fathers’ intentions.

In most areas, such as his originalist and textualist view of the law, Gorsuch is much in the mold of the late Scalia, the high court’s strongest conservative voice.

But Gorsuch’s skepticism of the Chevron doctrine is one area where "he and Scalia probably sharply diverged," said Thomas Lorenzen, a former Justice Department environment attorney.

"Scalia’s answer was to say that agencies are politically accountable to the president; better let them make the calls," Adler said. "And Gorsuch’s response was essentially, ‘Wait a second, it’s the obligation of the judiciary to say what the law is.’"

Legal scholars cautioned against viewing Gorsuch as an automatic vote against environmental protections. In 2015, he upheld Colorado’s renewable energy standard against a constitutional challenge by a conservative group. That decision stemmed from his skepticism of the Constitution’s dormant Commerce Clause.

The Supreme Court has already been less willing to defer to agencies during Chief Justice John Roberts’ tenure. In a recent majority opinion in a lawsuit challenging the Affordable Care Act, Roberts wrote that Chevron didn’t apply because the health care case was "extraordinary" and centered on a question of "deep ‘economic and political significance.’"

"A dose of legal realism: deference to agency interpretations will persist, whatever the nominal rules. Judges know how much they don’t know," Adrian Vermeule, a conservative legal scholar at Harvard Law School, tweeted today.

Getting rid of Chevron might not necessarily be a good thing for President Trump, according to legal scholars, as he’ll likely need it in place to push through an anti-regulatory agenda.

Michael Burger, executive director of the Sabin Center for Climate Change Law, said that the concerns about Chevron from conservatives seem to assume that there are going to be conservative judges reviewing "more liberal executive agency decisions, and therefore there’s a need for this correction."

The alternative, wrote Seth Jaffe, a partner at Foley Hoag LLP, in a blog post this week, "is for courts to decide all questions of agency authority. But haven’t conservatives railed against unelected judges for years? Bureaucrats are unelected, but at least they work for the elected president."

"Isn’t EPA more likely to be responsive to President Trump than federal judges would be?" Jaffe wrote.

From there, Ed Pagano, who worked previously in the Obama administration as the president’s liaison to the Senate, predicted that the Senate will spend at least two months reviewing Gorsuch’s record and holding a confirmation hearing that could last anywhere from two to four days.

"From the Democratic perspective, a lot of folks are feeling that Merrick Garland — he was not given a hearing — was not treated fairly," Pagano said, referring to former President Obama’s unsuccessful Supreme Court nominee. "There’s already some bad blood from that. So I do feel like it’s going to be a pretty partisan process."