Would Kavanaugh limit the Chevron doctrine? 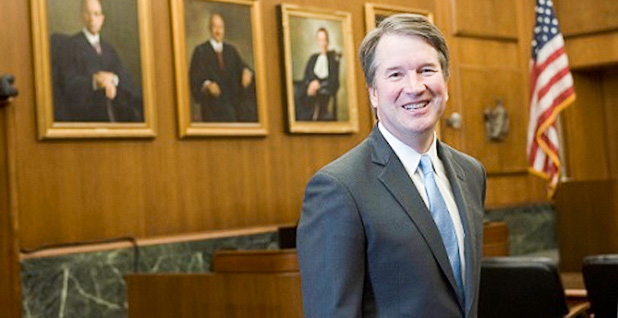 Unlike Justice Neil Gorsuch, Supreme Court nominee Brett Kavanaugh hasn’t called the Chevron doctrine entirely into question or questioned whether the law world would be better without it.

According to Chevron, courts defer to reasonable agency interpretations when Congress has been silent or ambiguous on a topic. It’s a key doctrine in administrative law and one that’s often invoked in environmental cases.

"I would expect him to approach Chevron the way the chief justice does, which is to try and cabin its scope, so that agencies get deference in a smaller category of cases, and only when there is no doubt Congress expressly intended to leave the matter to the agency’s discretion," said Jody Freeman, a law professor at Harvard Law School and a former climate adviser to President Obama.

The Chevron doctrine, which is named for a 1984 Supreme Court case, played a big role in the confirmation battle for Gorsuch, who wrote a scathing concurring opinion slamming the doctrine shortly before he was nominated for the high court. Senators focused several questions on the doctrine during Gorsuch’s multiday hearing.

Kavanaugh, who formerly clerked for Kennedy, would likely be similar to the retiring justice but "maybe a bit more muscular in language in limiting Chevron," said Kent Barnett, a law professor at the University of Georgia who has studied the doctrine’s application in the courts.

In his time in the D.C. Circuit, Kavanaugh often found that agencies don’t have the authority to issue regulations under the law, particularly in the context of the Clean Air Act. Kavanaugh wrote opinions and dissents rebuffing several of the Obama administration’s emissions regulations (E&E Daily, July 10).

"Judge Kavanaugh’s record suggests that he has no hesitation deciding when agencies are out of bounds and don’t deserve deference," Freeman said.

When it comes to Chevron, Kavanaugh believes that it’s a problem that there’s no "definitive guide" for determining whether a law is ambiguous.

"Many judges do this, but sometimes he avoids reaching any Chevron question because he finds that the law is clear," said Lisa Heinzerling, a professor at Georgetown Law and a former Obama EPA official. "He has a pretty pronounced tendency to find the law clear in cases where he’s rejecting what the agency did."

"Quite simply, there is no good or predictable way for judges to do this," he said. "Judges go back and forth. One judge will say it is clear. Another judge will say, ‘No, it’s ambiguous.’ Neither judge can convince the other. Why not? The answer is that there is no right answer."

On the D.C. Circuit, Kavanaugh has also taken to heart the Supreme Court’s so-called major questions doctrine, which states that Chevron should not be applied to rules that are economically, politically or socially significant.

Notably, the late Justice Antonin Scalia invoked that doctrine in the Supreme Court’s 2014 decision throwing out portions of a rule requiring stationary facilities to obtain air permits for emissions of greenhouse gases.

During marathon September 2016 arguments over the Clean Power Plan, the Obama administration’s rule for cutting carbon dioxide from existing power plants, Kavanaugh focused several questions on whether the rule was transformative enough to warrant the special standard of review.

Kavanaugh refined his views on the doctrine in a 2017 dissent to the D.C. Circuit ruling that upheld the Obama administration’s net neutrality rule, which he called "one of the most consequential regulations ever issued by an executive or independent agency in the history of the United States."

"He’s come down pretty firmly on the side of saying an agency can’t issue a major rule without clear congressional authorization," Heinzerling said. "It would be a big deal if that rule had gotten embraced."

According to new research exploring the doctrine’s political dynamics, Kavanaugh is "pretty neutral" about how he applies Chevron, Barnett said.

For example, in his majority opinion striking down the Obama administration’s effort to phase out hydrofluourocarbons, which are potent greenhouse gases, Kavanaugh wrote that the court respected the effort to order the replacement of substances found to contribute to climate change in the absence of congressional action on the issue.

But, he wrote, "however much we might sympathize or agree with EPA’s policy objectives, EPA may act only within the boundaries of its statutory authority. Here, EPA exceeded that authority."