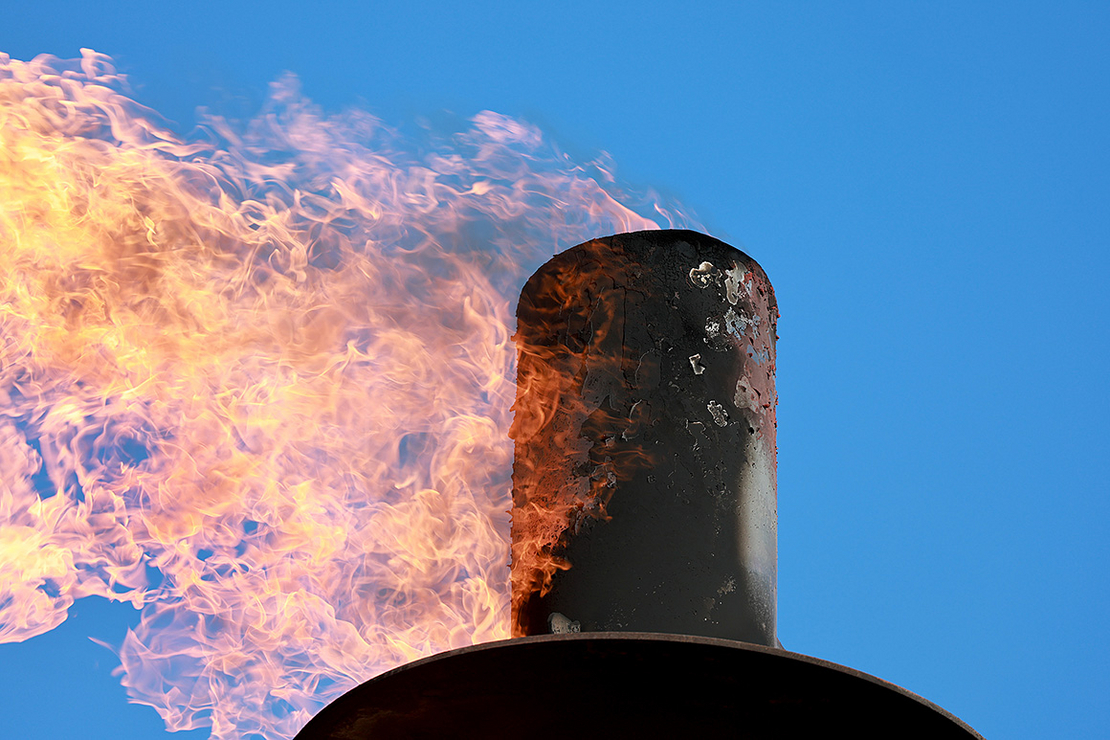 Natural gas being flared off in the Permian Basin in Stanton, Texas. Joe Raedle/Getty Images

“Inflation Reduction Act” provisions aimed at cutting methane emissions would be a boon for the high-tech companies that sell detection equipment, but it may not have a big effect on the broader oil and gas industry’s emissions, analysts say.

The bill — which passed the Senate last Sunday — includes $1.5 billion to promote methane detection and measurement in the oil and gas sector. Those funds could help the growing group of companies, many of them supported by the Department of Energy, that are deploying lasers, drones, satellites and other technology to help producers spot fugitive methane emissions (Energywire, Oct. 25, 2021).

But another provision — a fee of up to $1,500 per ton on emissions from oil and gas producers, pipeline operators and others — may have a muted effect on the industry. The charge wouldn’t apply to the entire oil and gas sector, and would miss roughly 60 percent of the industry’s emissions, noted Robert Kleinberg, a researcher at Columbia University’s Center on Global Energy Policy.

EPA’s pending regulations on methane from the oil and gas industry, along with pressure from investors, is likely to remain the main factor that pushes companies to cut their emissions, according to several observers. “There are a whole bunch of loopholes” in the methane fee’s structure, Kleinberg said.

Some of the best-known companies, like Exxon Mobil Corp. and pipeline giant Energy Transfer LP, also were already working on ways to curb their methane emissions before the bill moved through Congress.

“All the big operators, they understand that this is the reality,” said Dan Katz, CEO of Orbital Sidekick, which provides satellite-based monitoring systems for pipeline operators and other energy companies.

“Even if it wasn’t going to come in the form of hard regulation, the entire industry is moving in this direction” of cutting emissions, he added.

The oil and gas industry is one of the biggest sources of methane pollution — the gas is produced alongside oil and frequently leaks from wells, pipelines, compressors and other equipment. Methane traps more than 20 times more heat than carbon dioxide when it’s released into the atmosphere.

Separately, EPA has been developing regulations to control methane leaks from existing oil and gas fields, which are expected to be finalized sometime next year. If implemented, the methane fee in the climate bill would be the first federal tax on a greenhouse gas (Climatewire, Aug. 3).

At the same time, environmentally sensitive investors have been pushing oil producers and other companies to cut their emissions as a way to protect their bottom line. Exxon Mobil announced last year that it will cut its greenhouse gas emissions to the equivalent of zero by the end of the decade in its Permian Basin operations, which cover parts of Texas and New Mexico. Energy Transfer, which operates 120,000 miles of gas, crude oil and other pipelines around the country, has promoted its own plans to cut its emissions, including replacing outdated equipment and installing electric pumps.

That interest was already creating a market for methane-detection systems, even before Congress took up the climate bill, said Caroline Alden, an executive vice president at LongPath Technologies Inc. LongPath developed a land-based system that’s based on a Nobel Prize-winning laser technology and can detect methane emissions within a 2.5-mile radius.

The company has installed 22 of the systems in the Permian Basin and other oil fields in Oklahoma and Colorado, Alden said. Katz’s company, Orbital Sidekick, announced an agreement in June with Energy Transfer to monitor parts of the company’s pipeline system in the Permian Basin.

“Folks are trying to pick out the right solutions,” Alden said.

Even though the market currently is driving development, observers say the incentives in the bill would encourage other companies to start monitoring their emissions and boost the detection industry — although it won’t have the same impact as EPA rules.

Questions also remain about the extent to which existing technology can fully spot and stop leaky wells and pipes, and it is up to producers and pipeline operators to fix any leaks.

The congressional package would give the EPA $850 million to distribute in grants for methane monitoring and measurement, along with plugging wells on nonfederal land or improving the “climate resiliency of communities and petroleum and natural gas systems.” The bill would also provide $700 million to address emissions from marginal conventional wells.

The methane fee, on the other hand, would apply to oil and gas facilities that emit more than the equivalent of 25,000 tons of carbon dioxide a year, a threshold that applies to facilities responsible for about 40 percent of the industry’s emissions, said Kleinberg.

According to an Aug. 4 report from the Congressional Research Service, the proposal would affect 2,172 oil and gas facilities.

The bill relies on an existing calculation method that EPA uses. Companies count the number of wellheads, valves, flares and other pieces of equipment in their operations and multiply the number by an agreed-upon “emissions factors” for each component to determine an estimate of the methane they release.

The “bottom-up” calculations have been challenged by the Environmental Defense Fund and other researchers who say the actual emissions in parts of the oil field are several times higher than what companies report to the EPA (Energywire, April 12, 2019).

The Independent Petroleum Association of America opposes the fee, calling it a tax that singles out energy producers. But a spokesperson for the group, Jennifer Pett Marsteller, acknowledged that “freezing the application threshold at 25,000 [metric] tons/year should largely exclude smaller producers.”

Supporters of the measure’s methane fee also say it could still have a side benefit.

Its structure would give companies an incentive to reduce their emissions over the next few years.

The fee would start at $900 for each ton of methane emitted in 2024 and rise to $1,500 in 2026. And facilities that come into compliance with future EPA regulations on methane pollution would be exempt from the fee.

Taken as a whole, the structure of the bill provides a strong incentive for companies to comply with EPA’s future methane regulations, “much earlier than they would have to comply with an EPA rule,” said Darin Schroeder, an attorney with the Clean Air Task Force, in an email.

High natural gas prices have also given companies a reason to cut their emissions, since they can sell any gas they recover for a profit, said Andrew Logan, senior director of oil and gas at Ceres, an activist investor group.

The methane fee will provide another push for companies to cut their emissions and comply with the EPA regulations, he said.

“The methane fee only applies to emissions that aren’t covered by the coming EPA rule,” Logan said in an email.

“From an economic perspective, the industry is better off being covered by the modest EPA proposal, than by the methane fee,” Logan continued. “That means that the methane fee makes it more likely that we will get an EPA rule that is fairly comprehensive — because otherwise the industry will need to pay more to comply with the methane fee.”