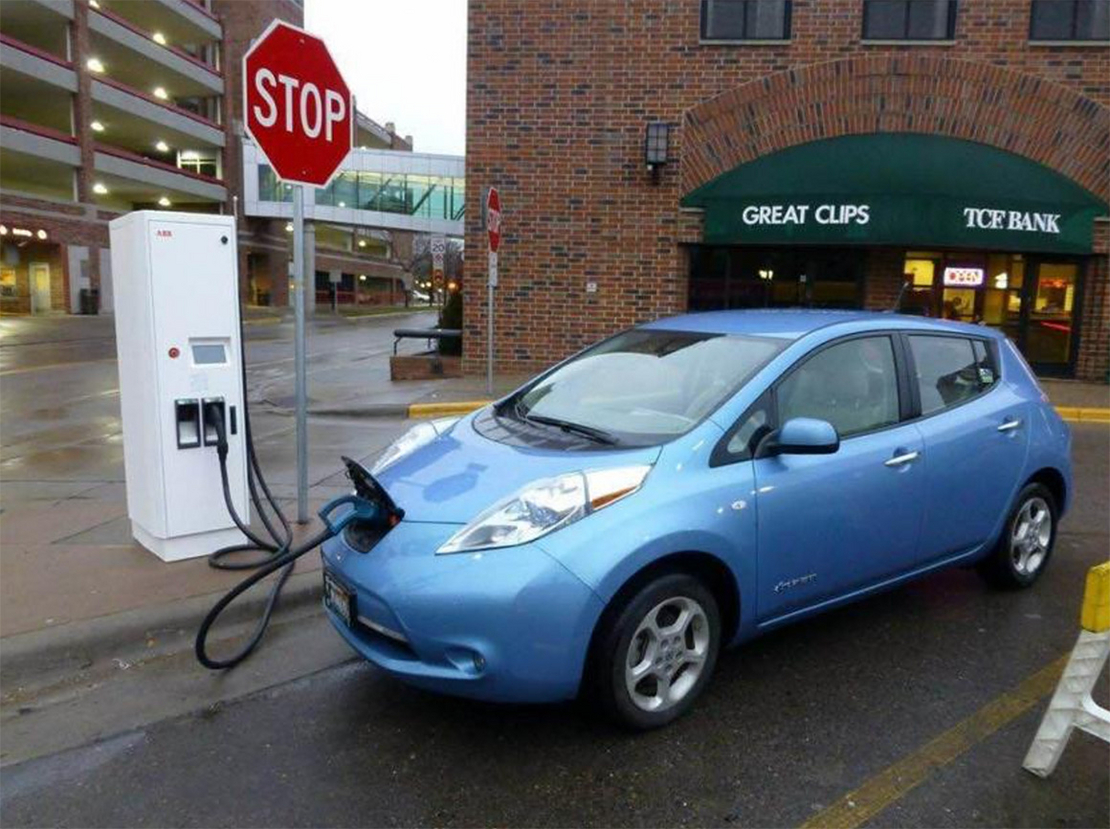 Xcel Energy Inc. wants cars and trucks across its eight-state service area to run on electricity or other carbon-free fuels by 2050. An electric vehicle is pictured at a charging station in Minnesota. Minnesota Pollution Control Agency

The first major utility to establish a goal to eliminate carbon pollution from power plants is now seeking to help do the same with cars and trucks across its service areas in eight states.

Minneapolis-based Xcel Energy Inc. said yesterday it wants to help power all vehicles with carbon-free energy by midcentury. The announcement was made in coordination with company proposals in Minnesota and Wisconsin to expand charging access for homes, business, fleets and public charging.

This isn’t the first carbon emissions goal established by Xcel, or even the first electric vehicle goal. Two years ago, the utility set out to electrify 20 percent of the passenger cars and trucks in its service areas by 2030 (Energywire, Aug. 13, 2020).

But unlike tackling emissions from its fleet of power plants, slashing greenhouse gases from millions of tailpipes is a thornier problem. Nationally and in many individual states, carbon emissions from transportation already exceed emissions from the power sector. It’s also a challenge that utilities like Xcel have little control over.

Federal and state policies, as well as automakers and their ability to deliver vehicles and consumer preference, will go a long way toward dictating the pace of the transition away from fossil fuels in the transportation sector. Nonetheless, Xcel executives believe the company, its programs and investments in charging infrastructure have a key part to play.

“We don’t make the cars, we don’t sell the cars. But what we do is provide the infrastructure that is supporting this evolution,” said Nadia El Mallakh, area vice president of Clean Transportation and Strategic Partnerships at Xcel.

Phil Jones, executive director of Alliance for Transportation Electrification, a nonprofit formed in 2017 to promote EVs in state-level policy, said in a statement: “The utility must play a key role in enabling this market transformation, engaging with its host sites and customers, and managing the charging data in a way that benefits both the customers and the overall electric grid.

Xcel sees its EV vision as a complement to its goal to eliminate power sector carbon emissions by 2050, noting that as its generating fleet becomes cleaner, so too will the cars and trucks it powers.

Across Xcel’s eight-state system, EVs are 55 percent cleaner than gasoline-powered cars on average. With continued investments in wind and solar generation displacing fossil fuels in coming years, EVs are expected to be 80 percent cleaner by 2030, according to Xcel.

Meanwhile, the conversion to EVs will also benefit consumers. Those who charge during off-peak hours pay the equivalent of about $1 per gallon of gasoline.

El Mallakh said the company will maintain its 2030 goal to electrify one in five cars across its service areas, which also includes parts of the Dakotas, Michigan and Texas.

In recent filings with state utility regulators in Minnesota and Wisconsin, the company is proposing a suite of new programs that target numerous customer segments. The proposal in Minnesota also includes an electric school bus pilot in which Xcel would provide 32 electric school buses and charging infrastructure to districts at no cost to demonstrate vehicle-to-grid capabilities.

A key component of the proposals in the two Midwest states is expanding access to public charging.

The utility is proposing to add about 750 high-speed charging locations with a total 1,500 ports across the two states — infrastructure the company says is needed to help the states achieve their respective policy goals of reducing carbon emissions from the transportation sector.

Xcel said the state of Minnesota, which has a goal of 20 percent EV penetration by 2030, is falling short of the goal with less than 1 percent of the total light-duty vehicles expected to be electric at the end of this year.

As Xcel sees it, both regulated utilities and the broader market have a role to play in filling the gap.

“I think it’s all hands on deck at this point,” El Mallakh said.