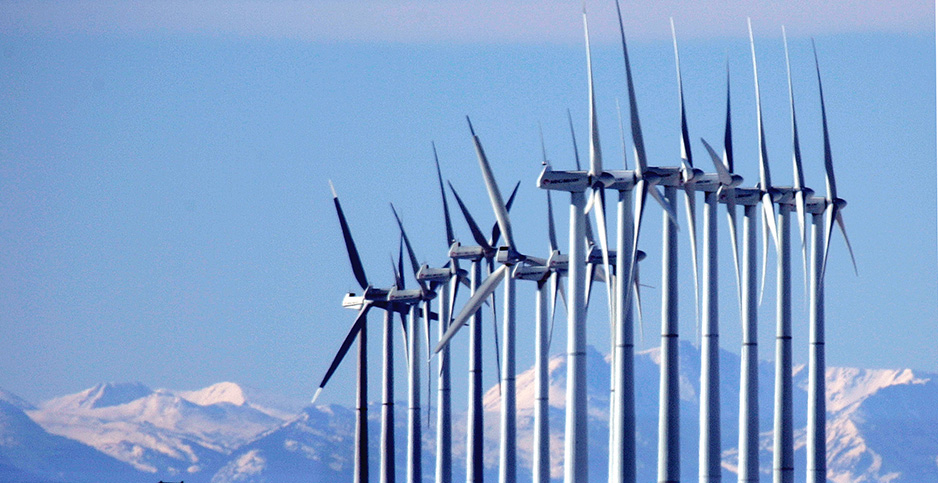 The Rocky Mountains can be seen in the distance as wind turbines generate electricity at the Ponnequin Wind Farm near Carr, Colo. The Xcel Energy Inc. facility was recently shuttered as the company expands its wind capacity with newer wind farms. Ed Andrieski/Associated Press

Second in a three-part series. Click here for part one.

Xcel Energy Inc. was ill-prepared for the winter storm that blew into Colorado on Christmas Eve in 2007. All of a sudden, the Rocky Mountain state’s largest utility had too much wind.

Wind power has long seduced some U.S. utilities. Unlike coal, natural gas or diesel power, the wind is free. But learning how to forecast its force, and then handle it, has proved to be a major hurdle for power companies.

Few utilities have invested more in solving that conundrum than Xcel. The Minneapolis-based utility, which serves eight Midwestern and Western states, is one of America’s leading wind pioneers. In Colorado, the company is considering plans to shutter coal plants to make way for wind and other renewable resources. Xcel plans to add more than 3 gigawatts of wind power across its service area in the coming years and expects to generate the majority of its electricity from wind by 2021.

"We’ve been moving in this direction for some time," said David Eves, who leads Xcel’s Colorado division. "I think that the logical step that we just moved into here is the transformation of the system, the retirement of the coal, the reuse of the transmission, as part of the new renewable plan as stand-alone additions of new wind and solar."

Back in 2007, Xcel was still learning how to integrate wind into its system. The company started the year with 350 megawatts of wind; by Christmas Eve, it had added 700 MW, giving it the equivalent wind power production in Colorado of an average nuclear power plant.

That presented a new experience for a business that traditionally flips switches as daily power demands change, by turning plants on and off. Such adjustments are critical in the power business, where electricity supplies must always be balanced against electricity demand. If not, the result can be a blackout.

Compared with traditional power sources, such as coal, the amount of wind power initially available from turbines was tiny. But Xcel executives got more comfortable as the price for producing wind power began to drop. For the company’s operators, the people who flip the switches, the adjustment took awhile. At first, wind power was regarded as trivial. It was just "noise," as Drake Bartlett, a senior energy trading analyst for the utility, recalled.

That all changed with the Christmas Eve storm.

It whipped across Colorado, delivering an additional 750 MW of wind power in less than an hour. Suddenly, Xcel’s whirling turbines were producing way more power than its Colorado customers could use. Company officials were shocked. The utility hadn’t yet installed enough controls to handle it. Xcel put the unneeded power on the regional grid, hoping other customers in the region might take it. They did, to the company’s relief.

"As a balancing authority in the area, we’re supposed to maintain that balance" between supply and demand, Bartlett recalled. "We are not supposed to be forcing all of this extra energy on our neighbors, but that’s what we were doing."

Meteorologists refer to these strong weather fronts as "ramps." The Christmas Eve event became known to power operators as "the 2007 Santa Claus Ramp." And it sent company executives on a search for a better system of forecasting wind.

Xcel formed a partnership with the National Center for Atmospheric Research, run by the National Science Foundation, and with the U.S. Department of Energy’s National Renewable Energy Laboratory. The company’s operators became sensitized to the power in wind ramps, as Xcel hired meteorologists and bought a battery of radars, sensors and weather models to help them configure its system a day and a half before wind ramps arrived.

Sue Ellen Haupt, a lead meteorologist for NCAR, recalls visiting the operators in 2010 after the forecasting system had been set up. She remembers an 800-MW wind ramp arriving and how excited the operators were to grab and use most of the power.

"They believed the forecasts, and they actually brought down coal units to make room for the wind. They loved us," she recalled.

For Xcel, big wind was becoming big money. According to Haupt, the forecasts, preparations and timing meant the company could save $10 million in power production costs each year. The operators’ learning curve was not without some nail-biting moments, though.

Bartlett recalls a night in 2014: As power demand tapered off around 11 p.m., the company’s wind farms were harvesting power from a 1,000-MW ramp, but then the wind suddenly stopped.

Normally at that hour, most of Xcel’s power plants would have been shut off, but the power dispatcher had studied the forecast and kept some on standby. "He was really glad," explained Bartlett. "When you turn them off, the people leave the plant."

Xcel has since refined its reserve power system, paring down its costs, but keeping enough power — mainly fired by natural gas — at the ready to handle almost any wind-related surprises within 30 minutes.

With a greater grasp on forecasting and integrating wind into its system, Xcel has turned its focus to installing more turbines. The utility is working on plans to build 11 new wind farms in seven states, in part to capture the soon-expiring federal wind production tax credit.

When that plan is completed, it has a proposal to add several more wind facilities.

In Colorado, the company has gone a step further, tying the addition of new wind facilities to the early retirement of two coal-fired units at the Comanche Generating Station in the prairie community of Pueblo.

Closing the Comanche coal units will free up more transmission capacity and relieve the biggest obstacle facing renewables today, Xcel officials say. They believe the cost of renewables has fallen to the point where the company can retire the coal plants and replace them with new resources at no additional cost to customers.

Their plan has two parts. Xcel is accepting bids for up to 1,000 MW of new wind, 700 MW of solar and 700 MW of natural gas or storage. To pay down the remaining debt on the coal units, Xcel has proposed halving a fee approved by Colorado voters in 2006 to support development of renewable projects and redirecting it to cover the outstanding coal payments.

The upshot: Xcel is proposing to derive 55 percent of its power through renewables by 2026, with 40 percent coming from wind. Colorado’s renewable energy standard, passed in 2004, required utilities to produce 30 percent renewable energy in the state by 2020.

The proposal, which still has to be approved by Colorado regulators, has won broad support from groups that normally fight each other during utility rate cases. Environmental groups are excited to see Xcel couple the retirement of new coal plants with the addition of renewables. Independent power producers are eager to compete for the new contracts. And large power consumers signed onto the deal in hopes it would lower costs.

"When you look at the people who signed onto the stipulation, it’s people who you wouldn’t expect to hang out together," Erin Overturf, an attorney with Western Resource Advocates, a Colorado-based environmental group that supports the proposal, said with a laugh.

But the reason for the agreement is simple, she said. The cost of wind power has fallen to the point where it just makes economic sense.

"Today, the primary barrier to acquiring more renewables is the existing system," Overturf said. "We need to remove some of these uneconomic legacy assets in order to make room for new clean energy resources. The economics have changed so much in the last 10 years at a cost-neutral or at a lower cost to customers."

Mark Detsky, an attorney who represents a group of Colorado independent power producers, said other utilities in the state have started to follow Xcel’s lead. All of Tri-State Generation and Transmission Association Inc.’s recent power plant acquisitions have been wind or solar, he said. Same for Black Hills Energy.

The conversation about how to integrate wind and solar is now more focused on expanded regional cooperation, Detsky noted. The Mountain West Transmission Group, a collection of Colorado utilities including Xcel, is exploring the possibility of joining the Southwest Power Pool, a 14-state regional transmission group known as SPP.

By joining a larger pool of utilities, the thinking goes, power companies could better manage renewable resources like wind, sending power from where it’s being generated to where it’s needed.

A merger with SPP won’t be completed until 2019 at the earliest, said Eves, the Xcel executive. But the company plans to continue forging ahead with its plan to expand its wind capacity in the meantime.

"It’s kind of a logical next step for this to occur. I think it will probably be happening more in the whole industry," Eves said. "You listen to a lot of [coal] plant retirement announcements around the West, clearly we should be looking at how to use the transmission, come back in with renewables, try to address and create some economic benefit to set off the adverse benefits that occur.

"It’s really exciting," he continued. "It’s a great opportunity to try and see $2 [billion]-$3 billion of investment in rural Colorado at no increasing consumer prices. That feels like a win-win."

Just how Xcel’s planning might be affected by the end of federal and state renewable energy subsidies is not totally clear, but a preview may have come on an afternoon in April last year. On that day, Xcel’s system met its peak demands with a power mix that included a record 68.8 percent of wind.

Next: Making wind the cheapest fuel.