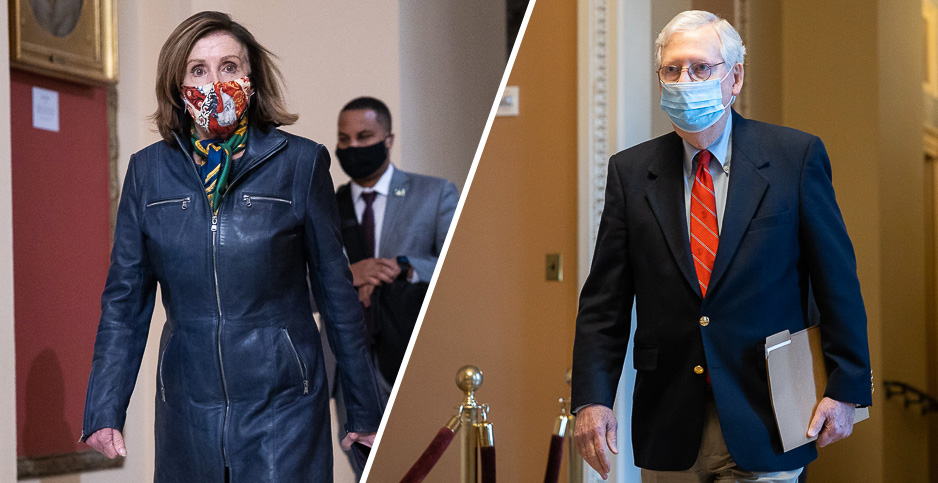 While negotiators largely sidelined energy issues during months of stalled talks on COVID-19 relief, a number of significant energy and environmental provisions will hitch a ride on the year-end agreement set to pass today.

House and Senate leaders yesterday announced they had reached a deal on a $1.4 trillion fiscal 2021 spending omnibus, pandemic relief legislation and a number of major items that will ride along. Final text had yet to be released by publication time.

"At long last, we have the bipartisan breakthrough the country has needed," Senate Majority Leader Mitch McConnell (R-Ky.) said from the floor yesterday.

The deal moved swiftly once negotiators agreed to compromise language to wind down certain Federal Reserve lending programs established by the Coronavirus Aid, Relief, and Economic Security Act. An impasse over the issue lasted days.

"The package also phases out superpollutant HFCs, positioning the U.S. to lead the world in avoiding up to 0.5 degree Celsius of global warming," they said.

On taxes, the deal would delay the phaseout schedule for the renewable and investment tax credits, with the PTC extended for one year and the ITC extended for two.

The discrepancy between the two crucial incentives stems from the fact the PTC received a one-year extension under a 2019 tax deal that did not include the ITC. Additionally, the deal would make waste-heat-to-power technology eligible for the ITC.

It would extend key efficiency breaks through 2021, while making permanent the 179D commercial building tax deduction for efficiency improvements.

It would provide five years for offshore wind, and two additional years for the Section 45Q carbon capture incentive.

While direct payments were widely sought for many incentives to account for frozen tax equity markets, they did not make the cut.

Extended through 2025 would be the excise tax of 9 cents per barrel of crude oil that finances the Oil Spill Liability Trust Fund.

Senate Finance Committee ranking member Ron Wyden (D-Ore.) lauded the end-of-year agreement struck with the leaders of the tax-writing panels in both chambers.

"I hope these extensions serve as a bridge to the comprehensive reform desperately needed to end our dependence on Big Oil and ensure that green jobs are good jobs," Wyden said in a statement. "I plan to keep at it until America kicks its carbon habit once and for all."

The package includes nearly $35.2 billion in research and development spending authorizations over the next decade in a clean energy innovation bill.

Led by the Senate Energy and Natural Resources, the House Energy and Commerce, and the House Science, Space and Technology committees, the legislation marks a culmination of nearly two years of work and a capstone to Alaska Republican Sen. Lisa Murkowski’s ENR Committee chairmanship.

With directions for increased spending and the demonstration of a number of new technologies needed to help combat climate change — including energy storage, carbon capture, direct air capture and advanced nuclear, among others — the bill marks the first major overhaul to the nation’s energy policies in over a decade (E&E Daily, Dec. 15).

The spending and pandemic package also contain a five year reauthorization of the Transportation Department’s Pipeline and Hazardous Materials Safety Administration, which had lapsed over a year ago and been subject to partisan sniping.

The inclusion appears to be based heavily on the Senate’s bipartisan bill, S. 2299, that passed in August following a breakthrough after Senate Republicans relented and let Sen. Tom Udall (D-N.M.) attach requirements for operators to use the latest technology for methane leak detection and prevention, among other methane-related provisions (E&E Daily, Aug. 7).

Democrats have focused on PHMSA methane monitoring as they look to better address the climate effects of fossil fuel infrastructure. Methane is a greenhouse gas 26 times as potent as carbon dioxide.

The PHMSA reauthorization originally introduced by House Democrats was much more ambitious on methane and climate. Republicans in both chambers said it was a nonstarter (E&E Daily, Jan. 8).

The compromise deal includes legislation to phase down the use of HFCs, a potent class of greenhouse gases used in air conditioners and refrigerators.

It would be one of the most significant climate bills Congress has passed in years. The HFC bill could help avoid half a degree Celsius in global warming, as part of a larger international phase down agreement struck in 2016.

The measure, which would phase down HFCs 85% over 15 years, derailed Senate consideration of the energy bill earlier this year, but leaders on the Environment and Public Works Committee struck a deal in September, which ultimately cleared it for addition to the omnibus (E&E Daily, Sept. 11).

Included in the final omnibus bill is language from the "Water Resources Development Act of 2020," S. 1811, which passed the House earlier this month.

The compromise legislation, among other things, would authorize a record number of Army Corps of Engineers projects (E&E Daily, Dec. 7).

Senate appropriators had objected to language authorizing $10 billion in spending from the Harbor Maintenance Trust Fund.

It appears the final bill addresses those concerns while "unlocking the Harbor Maintenance Trust Fund," according to a Democratic press release.

Included in the final stimulus agreement was language that would have allowed nonprofits organized as 501(c)(6) organizations to qualify for loans through a fund structured similarly to the Paycheck Protection Program.

This was a major ask from the outdoors recreation industry, which represents trade associations that have suffered debilitating revenue losses with the pandemic-related cancellations of trade shows and conferences.

While the original coronavirus relief package that created the PPP specifically allowed 501(c)(3) charitable nonprofits and churches to apply for loans, 501(c)(6) groups were exempt from participating.

Bipartisan legislation from Sens. Todd Young (R-Ind.) and Michael Bennet (D-Colo.) — the "Reviving the Economy Sustainably Towards a Recovery in 2020 (RESTART) Act," S. 3814 — would have established a loan program open to a broader pool of applicants, including trade groups.

Sources said at one point there was a "real chance" that this language would make it into the next phase of coronavirus relief legislation, with Young telling E&E News in October that Treasury Secretary Steve Mnuchin liked the concept (E&E Daily, Oct. 22).

While a Senate aide confirmed to E&E News late last night that the full "RESTART Act" had not ultimately made it into the more narrow coronavirus stimulus compromise bill, language benefitting trade associations was included.

Clarification: This story was updated to clarify that language from the "RESTART Act" is part of the bipartisan compromise spending and pandemic bill.