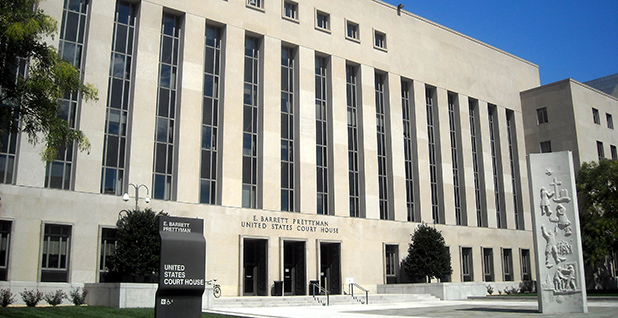 The U.S. Court of Appeals for the District of Columbia Circuit heard arguments this morning over the Obama-era ozone rule. NCinDC/Flickr

During long-awaited oral arguments at the U.S. Court of Appeals for the District of Columbia Circuit, government lawyers defended the agency’s 2015 thresholds for the air pollutant as "forward progress" aimed at protecting vulnerable people.

"The revised ozone standards here represent notable forward progress in protecting the health of all Americans across this country," Justice Department attorney Justin Heminger told a three-judge panel this morning.

The Trump administration’s defense of the 2015 rule, which marked 70 parts per billion as the highest acceptable amount of ground-level ozone under the Clean Air Act, comes after more than a year of uncertainty over whether EPA would try to loosen the standard to please industry players.

Ultimately, EPA agreed to stick with 70 ppb, a decision that prompted today’s unlikely standoff between the agency and some of the president’s most ardent supporters, including Murray Energy Corp. (Greenwire, Dec. 17).

Lawyers for the agency fended off complaints from industry parties and mostly conservative states that the ozone standard is simply impossible to achieve, given existing levels of background ozone that states cannot control. EPA also pushed back on environmentalists’ claims that the threshold is not strong enough.

The question of whether EPA should accommodate background levels — that is, ozone that has drifted across borders or formed from natural sources — when setting National Ambient Air Quality Standards for ozone is especially relevant now as the agency conducts its next five-year review of the threshold.

Arizona Solicitor General Dominic Draye, representing litigants who think the 2015 levels are too tough, argued today that EPA’s decision to ignore background ozone levels when setting the 70-ppb standard is irrational and unfair to states and companies trying to comply. Places suffering from high levels of background ozone beyond their control are deemed "nonattainment areas" under the NAAQs and then saddled with onerous permitting requirements.

"EPA could … set a standard that’s defined as background-plus-20 parts per billion or whatever," he said, noting potential alternative approaches. "The point is that this lack of creativity is a function of sloppy and hasty rulemaking."

At least two judges on the panel aired skepticism about the argument. Judge Thomas Griffith asked Draye to point out what provision in the Clean Air Act requires EPA to build in background levels to ozone standards.

Griffith, a George W. Bush appointee, noted that certain parts of the law address EPA’s consideration of background ozone at a later stage, in implementation regulations that follow the agency’s determination of a threshold, "which suggests that that’s where you pay attention to background ozone and that it’s not necessary to do so when you’re establishing NAAQS in the first place."

Dominic said he reads the provisions the opposite way, as evidence that Congress didn’t intend for states to be on the hook for ozone they can’t control.

Judge Nina Pillard, an Obama appointee, challenged Dominic with EPA’s key argument: "The agency is saying it’s not considering background ozone as an excuse not to come up with a level requisite for the public health."

She sidestepped a question, however, about whether EPA is permitted to consider background ozone, responding that the issue simply isn’t before the court at this time. EPA is weighing that question for its next five-year standard, and the courts can decide the issue after that, she said.

Earthjustice attorney Seth Johnson urged the court to take this opportunity to resolve the debate. He argued that the Clean Air Act gives EPA "no authority whatsoever" in setting standards.

"That’s not an issue we need to reach in this case, though?" Griffith asked. "You’d like us to."

"It would be efficient," Johnson said to laughter. "And it would be proper."

Pushing for a stricter standard

The D.C. Circuit also grappled with arguments today that EPA’s 2015 ozone levels are not tough enough.

Environmentalists say the agency failed to justify its decision to opt for the least stringent level of a range recommended by outside experts advising the agency on the issue. They question EPA’s methodology and say its approach results in adverse health effects, including allowing areas to greatly exceed permitted levels of ozone many days or weeks each year.

Ozone contributes to the formation of smog, which can cause severe breathing problems in children and people with asthma.

The judges pelted Johnson, the Earthjustice lawyer, with technical questions about EPA’s analysis. Judge Robert Wilkins, an Obama appointee, pressed him on the limits of environmentalists’ arguments.

"Are you saying that the statute requires them to set the standard such that … to be in compliance, the area can never exceed that standard on any given day?" he asked.

Johnson skirted a direct answer but maintained that the Clean Air Act requires EPA to set a standard that ensures the "absence of adverse effects" on public health.

The court appeared somewhat more receptive to environmentalists’ claims that EPA did not adequately justify its secondary ozone standard — the threshold for protecting plants and animals, which is also set at 70 ppb.

The judges repeatedly questioned DOJ lawyer Heminger on why EPA opted for a methodology that differed from the approach recommended by outside advisers at the Clean Air Scientific Advisory Committee.

Heminger explained that the agency looked at various measures of vegetation effects and used one — tree growth loss — as a surrogate to analyze broader impacts of ozone. It did not consider another measure — leaf damage — to be detailed enough to inform the standard. Pillard questioned the approach.

"I just don’t see where EPA has grappled with that," she said. "Given the damage, given the determination that this is an important element of the public welfare, it reads as if it’s dropped off the table."