Yellen, regulators soon to ‘set the agenda’ on climate risk 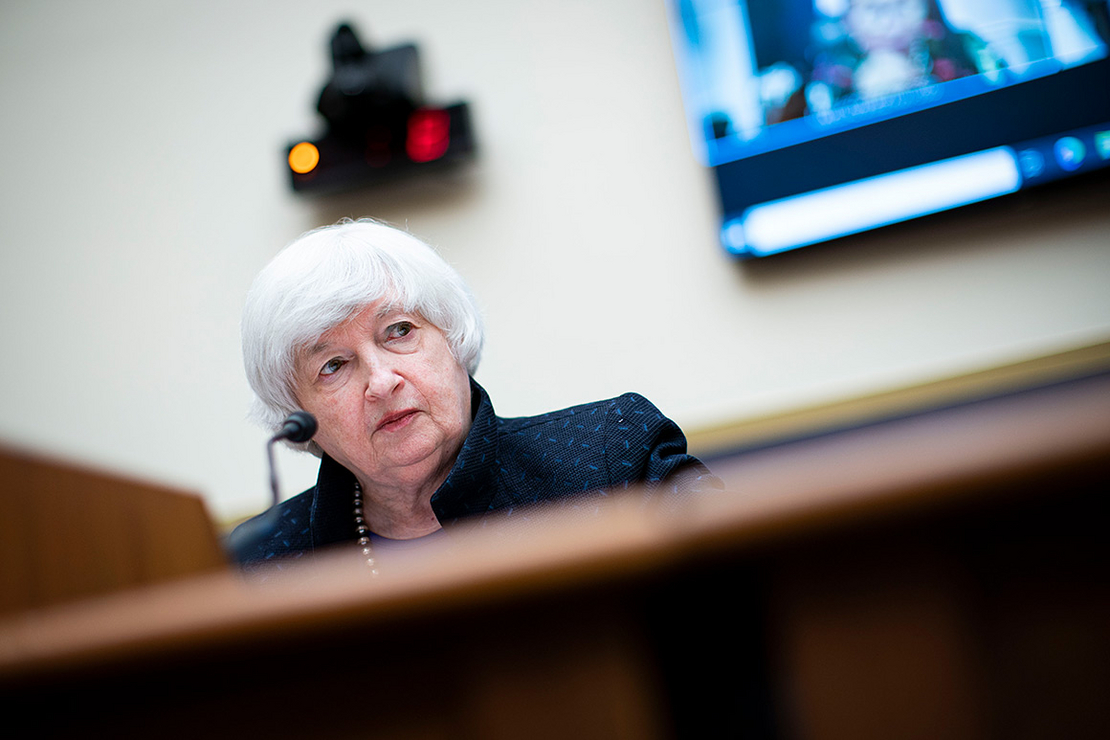 Treasury Secretary Janet Yellen and the rest of the Financial Stability Oversight Council are scheduled to meet tomorrow to discuss a new report that looks at financial regulators' efforts to address the economic threats of climate change. Al Drago-Pool/Getty Images

The nation’s top financial regulators are preparing to release a report this week that chronicles both their early efforts to tackle climate change as well as their possible plans for the future.

President Biden requested the report in May as part of an executive order that launched a governmentwide effort to address the financial perils posed by global warming.

Treasury Secretary Janet Yellen and the other members of the Financial Stability Oversight Council — a body composed of top U.S. economic officials — plan to discuss the report tomorrow during an open meeting, which will be broadcast live.

The stakes are high. Over the last two years, Democratic lawmakers, environmentalists and financial reform advocates have increasingly called on financial agencies to push the firms they oversee to prepare for the economic realities of a warming world.

It took several years — and a climate-focused, Democratic president — for U.S. regulators to embrace that idea more actively alongside their peers in Europe and elsewhere.

But sources say the report’s release will mark a critical moment in the Biden administration’s fight against climate-related risk, given that it’s the first time every financial agency will collectively weigh in on the issue by way of a comprehensive, public document.

“I think this will be a framework that helps set the agenda for the next couple of years about what the financial regulatory agencies can and should be doing” on climate-related risk, said Todd Phillips, a former attorney at the Federal Deposit Insurance Corp. who currently directs financial regulation at the Center for American Progress, a progressive group.

The report will dig into a slew of issues, according to a governmentwide climate risk road map the White House released last Thursday. Key among them will be the importance of climate-related disclosures by regulated firms, regulators’ current approaches to incorporating climate risks into their supervisory activities and recommended processes to better identify those threats moving forward (Climatewire, Oct. 15).

At the same time, the White House also has emphasized that the document is just a first stab at the issue — not the administration’s final word.

“The forthcoming FSOC report is the first step in a robust process of U.S. financial regulators developing the capacity and analytical tools to effectively assess and mitigate climate-related financial risks,” the road map said.

For that reason, the report likely won’t be a “laundry list” of specific policies or plans for each agency, potentially disappointing some advocacy groups, said Daniel Firger, a managing director at climate advisory firm Great Circle Capital Advisors.

In his eyes, that’s all right for now. “For the FSOC to lay out an approach and to indicate a pathway forward, even if it’s not with … timelines and deliverables and all that, I think, is useful at this point,” said Firger, who previously advised Michael Bloomberg in his role as chair of the Financial Stability Board Task Force on Climate-Related Financial Disclosures.

Richard Berner, who co-directs New York University’s Volatility and Risk Institute, reiterated that point. He thinks it’s likely the document will be “largely devoted to the facts and analysis regarding climate-related risks” — rather than “explicit discussion of policies.”

In that way, the report will help “lay the foundation, and then build on that foundation in order to decide what the right things to do are,” said Berner, who previously directed the Office of Financial Research and served as an Obama-era counselor to the Treasury Secretary.

Not everyone agrees. Progressive groups and environmentalists ranging from Bill McKibben to Evergreen Action and Americans for Financial Reform already have highlighted their expectations for the FSOC report — as well as their concerns that it may fall short.

Evergreen, for its part, said in a memo last week the report should include a “road map” for each FSOC agency that outlines concrete actions they should pursue to limit banks’, insurers’ and money managers’ contributions and vulnerabilities to climate risk.

Ideally, the group said, those road maps would include recommendations that agencies go beyond requiring companies to report their climate-related risks and strategies, which the Securities and Exchange Commission is already working toward.

Evergreen wants the agencies to do so by indicating they will begin issuing climate-related supervisory guidance to the firms they oversee, conducting climate-related stress tests and factoring climate risk into the capital requirements that determine how much liquid capital banks must maintain to stay afloat amid unanticipated shocks.

Americans for Financial Reform and Public Citizen echoed many of those points in a detailed list of policy recommendations they sent to Yellen last week.

“The Treasury report under the [executive order] must mark a clear transition into the next phase of the Administration’s response to the urgent threats of the climate crisis: one that moves beyond data gathering and capacity building to call for concrete, timely, and bold action on all fronts by all FSOC members to protect the economy,” the groups wrote.