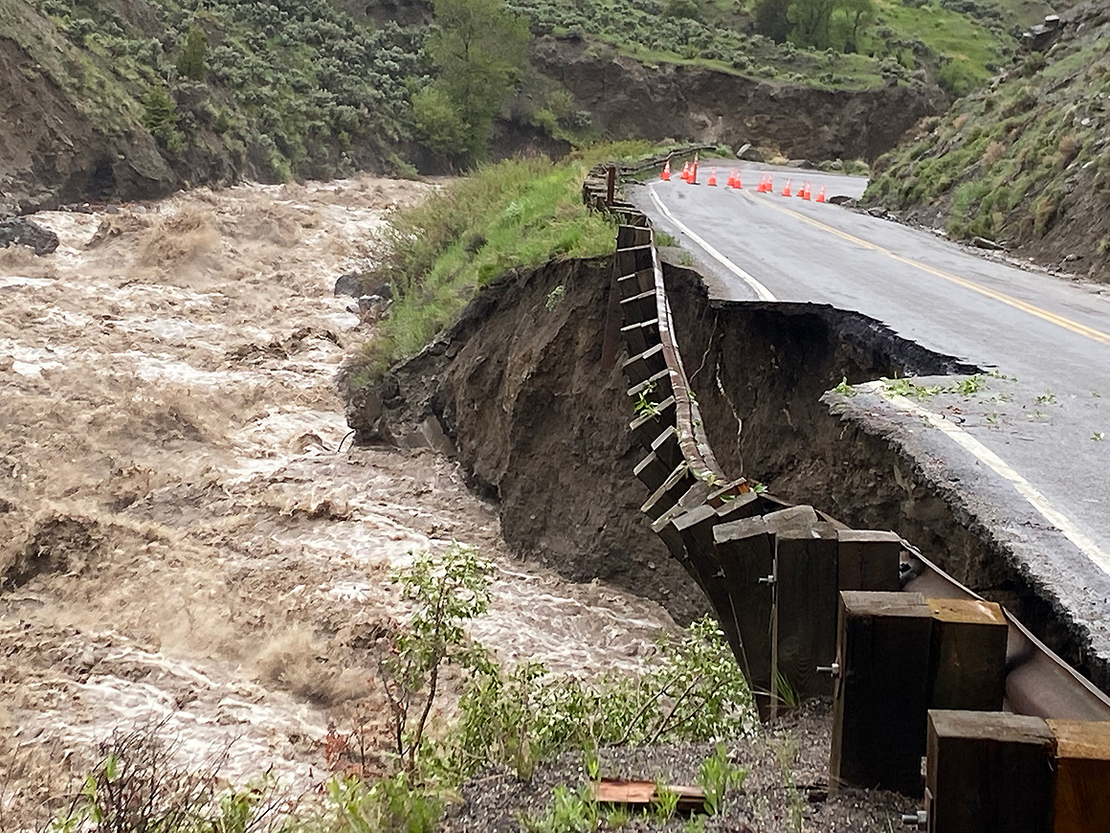 Yellowstone National Park is shuttered to visitors indefinitely in the wake of record-shattering floods — caused by a combination of heavy rains and late snowmelt — that triggered rockslides and mudslides and washed out roads and bridges.

National Park Service officials closed all five entrances to the park yesterday and began evacuating visitors, marking the first time a natural disaster has forced the agency to do so since wildfires destroyed 800,000 acres of parkland in 1988 (Greenwire, Oct. 5, 2016).

“We will not know timing of the park’s reopening until flood waters subside and we’re able to assess the damage throughout the park,” Superintendent Cam Sholly said in a statement.

“It is likely that the northern loop will be closed for a substantial amount of time,” he added, referring to the area that includes Mammoth Hot Springs in Wyoming.

Flooding across Montana and Wyoming broke records yesterday due to a combination of late-season snowmelt and an “atmospheric river,” or plume of moisture coming off the Pacific Ocean, said Cory Mottice, a National Weather Service meteorologist based in Billings, Mont.

“It’s unprecedented flooding. In our lifetimes, we’ve never seen anything like this before, and so predicting the impacts is pretty difficult,” Mottice said in an interview. “We don’t really have flood stages at this level.”

The Clarks Fork of the Yellowstone River near Belfry, Mont., farther east, likewise peaked at 12.93 feet, exceeding its 1981 record by nearly 3 feet.

While rivers to the west have likely peaked in yesterday’s storms, NWS predicts that rivers in Billings will still peak later today. The Yellowstone River could crest at nearly 15 feet, the weather service said on Twitter.

Mottice explained that flooding can be attributed, in part, to two major snowstorms in the Rocky Mountains in May, which deposited 3 to 6 feet of snow at higher elevations.

Tributaries, streams and land areas that drain into the Clarks Fork saw 5.1 inches of rainfall between June 10 and June 13, in addition to 3.6 inches of water from snowmelt.

Other areas, such as Red Lodge, Mont., located about 70 miles east of Yellowstone’s northern entrance, received less than an inch of rain during that same three-day period. But Red Lodge was inundated with nearly 5 inches of snowmelt waters.

“Generally speaking, most locations picked up anywhere from 2 to 5 inches of rain over that three-day period and saw two to four days of additional liquid from snowmelt,” Mottice said.

While researchers expected the runoff and rain, it still caught many by surprise.

“We definitely knew the rain and snowmelt was coming, but not to this extent. We’d never seen anything like this before,” Mottice said.

He added: “It’s not uncommon if you get a good snowpack into June — that’s when we tend to get our heavier rains and thunderstorms — it worked out that it was perfectly aligned for this event.”

“Today’s disaster declaration will help impacted communities get back on their feet as soon as possible, and I have asked state agencies to bring their resources to bear in support of these communities,” Gianforte said.

The rising Yellowstone River has triggered evacuation orders around the state as it floods its banks — wiping out power in some communities like Red Lodge, Gardiner and Fishtail — and approaches record levels.

The Billings Gazette noted that the river’s crest will likely fall just short of its 1997 record.

Montana Sen. Jon Tester (D) told Billings CBS affiliate KTVQ this morning that he is working with the Bureau of Reclamation, the Army Corps of Engineers, the Transportation Department, FEMA and other state and local agencies to address the damage.

“It’s going to take all hands on deck to deal with this. It’s a very serious situation,” Tester said. He lamented that the flooding occurred as Yellowstone begins its peak tourist season and the park marks its 150th anniversary (Greenwire, March 1).

Damage from the flooding cut off access yesterday to Gardiner, where many of Yellowstone’s workers live.

“We are working with the county and State of Montana to provide necessary support to residents, who are currently without water and power in some areas,” Sholly said.

Park officials also warned that floodwaters could damage wastewater systems in the southern end of the 2.2-million-acre park, prompting the evacuation of visitors from that area yesterday.

The NPS Yellowstone office did not immediately respond to inquires about the number of visitors evacuated from the park or how many people may still be inside its boundaries.

“The flooding in south central Montana has been catastrophic and devastating, and the economic impacts the communities will feel as a result will be hard,” Daines said in a statement to E&E News. “I’ve been in contact with local authorities and Governor Gianforte’s office and will be working to ensure Montana gets whatever emergency resources needed to get through this difficult time.”