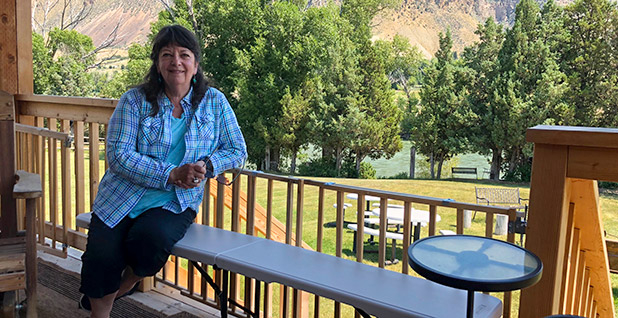 Bonnie Lynn, who lives near Beattie Gulch, has sued the National Park Service and the Forest Service over bison hunting. Rob Hotakainen/E&E News

For Bonnie Lynn, it has become an annual horror show. Hundreds of bison get gunned down in front of her home as they leave Yellowstone National Park in search of food.

The bullets begin flying, sometimes shot by 20 to 30 hunters at a time, as soon as the bison saunter into Beattie Gulch, a small strip of unoccupied federal land that abuts Lynn’s property near the park’s northern border in Montana.

This year Lynn and her neighbors say they’ve had enough: They want a federal judge to put an end to the killing.

On Monday, Lynn — who runs a real estate business in nearby Bozeman, Mont. — and a group called Neighbors Against Bison Slaughter filed a federal lawsuit seeking to permanently block the hunting. It accuses both the National Park Service and the Forest Service of having "repeatedly authorized the slaughter" despite the risks to human life and safety.

Jared Pettinato, an attorney representing Lynn, said that the 2019 season is set to begin in November but that most of the bison won’t get shot until later, when the snow deepens and the animals begin straying out of the park looking for new grazing land.

"The number of hunters keeps going up," he said. "It’s an escalating problem. … We’re asking to stop the hunt, to make it safe for everyone, because it’s currently an unsafe situation."

Lynn also filed a $500,000 claim against the federal government, saying the hunting has hurt her livelihood by making it impossible to rent two cabins she owns near Beattie Gulch.

"I have to tell people what they’re going to see across from my driveway," Lynn said last year. "Who in the world would come?"

For years, Lynn and her neighbors have complained that they’ve had to put up with blocked roads, bloody carcasses and a ton of trash that hunters leave behind, including beer cans and bison gut piles.

In a complaint filed in the U.S. District Court for the District of Columbia, the group said: "Hunters leave behind hundreds of gut piles that rot in the open, attract wildlife (that may include grizzly bears and gray wolves), finds its way into trees and yards on private property (from raptors and ravens) and turns the entire local area into an open-air charnel house."

NPS and Interior officials did not respond to a request for comment, while a spokeswoman for Yellowstone noted that the Park Service does not have jurisdiction over either the hunting or land outside the park.

"The State of Montana and the Forest Service have jurisdiction over hunting activities and the land base, respectively," said Morgan Warthin, a public affairs specialist at Yellowstone. "Also, there are two hunts, the tribal and state permitted public hunt. We are aware of the lawsuit and are reviewing the information. Otherwise, we cannot comment on pending litigation."

The issue has long been a headache for park officials, who say it’s tough to explain to the public why animals that serve as a tourist magnet at Yellowstone end up getting killed.

For starters, Yellowstone officials and the park’s neighbors say the hunt doesn’t even look like a hunt. It more closely resembles a harvest, because the animals aren’t running when they leave the park. They’re shot at close range.

"I think people would be outraged if they saw what was happening," former Yellowstone National Park Superintendent Dan Wenk said in an interview last year. He added that "for most people, it is not their idea of what a hunt would or should look like."

The issue has caused friction between Yellowstone officials and their superiors in Washington.

Last year, Wenk retired early rather than accept a reassignment to Washington after he clashed with former Interior Secretary Ryan Zinke over the maximum number of bison Yellowstone should hold. Wenk said he argued that the park should have an average of 4,200 bison each year, while Zinke wanted an average of no more than 3,000.

The number of animals killed each year varies, but in 2017 at least 250 bison were shot in Beattie Gulch, a natural bottleneck between the Yellowstone River and Gallatin Range of the Rocky Mountains.

In the interview last year, Lynn noted that the federal government is allowing the bison killings even though President Obama in 2016 signed the National Bison Legacy Act, making the American bison the national mammal, joining the bald eagle as an official symbol of the nation.

"This is a legendary animal that is being abused in the worst way — and most people don’t have any clue," she said.