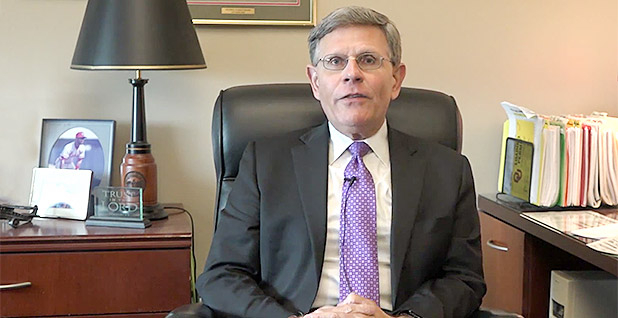 President Trump’s pick to lead the White House science office told scientists four years ago that "he doesn’t know" if there’s a climate tipping point and said the planet can be kicked "in the butt really, really hard" and recover.

The comments of former University of Oklahoma extreme-weather expert Kelvin Droegemeier, the choice to be director of the White House Office of Science and Technology Policy, occurred during a discussion at the South Central Climate Science Center. The remarks are in one of several videos online where the nominee sheds more light on his views of warming temperatures.

Droegemeier is set to testify tomorrow before the Senate Commerce, Science and Transportation Committee, and his views on climate change and federal research budgets are expected to be a focus. In the past, Droegemeier also diverged from Trump administration officials in calling for more federal science spending (Greenwire, Aug. 1).

In the videos, the Oklahoma meteorologist expresses belief in human-driven climate change but also repeatedly points out the limits of climate models. They are more complicated than weather models, which also are not perfect, he said.

During the talk at the science center, Droegemeier said the climate issue has become too politicized and that some people "become kind of crazy" when those limits are pointed out.

"If we are intellectually honest with one another, we’ll say, yeah, the observations show the planet is warming. The evidence of the models suggest that it’s human-induced, or there’s a strong human signal … but we don’t know everything there is to know about the nitrogen cycle, about all the carbon cycling, all this stuff. Carbon sequestration. We don’t know," he said, according to online audio of the talk.

"Frankly, unfortunately, a lot of the scientific community has gotten to the point where they’re saying … you’re an idiot if you go up there and say what I just said to you," he added.

"So I’m very skeptical of people who take that almost deeply ideological position of we absolutely know the answer," he said. "No, we don’t." He called for a new approach, where researchers are more active in explaining their results to policymakers.

Droegemeier said that computers can model the past climate very well when known factors like volcanic eruptions are plugged in. But at the same time, he pointed to the 2010 BP PLC oil spill and said "it’s gone" in part because microbes that previously were unknown gobbled up the oil.

"Is there a tipping point for climate change? I don’t know. The only thing that we can say for certain is we have our model results," he said.

"We can have some degree of confidence of what the human impacts are versus the natural impacts," Droegemeier said on the podcast about models. He noted that climate models can assess the past "quite faithfully."

"Every day, we are learning more. So science never ends, and models are never perfect, but I think they are getting better and better all the time," he said.

In his faculty profile video, Droegemeier explains how he founded a center to help predict extreme storms and expresses support for university work on climate and the human microbiome.

After hearing about Droegemeier’s comments to the center, Mann said maybe he was premature in his judgment.

"Without further explanation or context, it comes across as overly dismissive of the threat of human impacts on our environment including human-caused climate change," Mann said.

In a statement today, Sen. Maggie Hassan (D-N.H.) said she had met with Droegemeier and urged the Senate to swiftly confirm him.

"In particular, I was pleased to hear that, if confirmed, Dr. Droegemeier would focus on ensuring that the United States continues to be a leader in science and technology, as well as working to strengthen science, technology, education, and mathematics (STEM) education for our young people," Hassan said.

Correction: An earlier version of this story said the science discussion at the South Central Climate Science Center was two years ago, rather than four years ago.