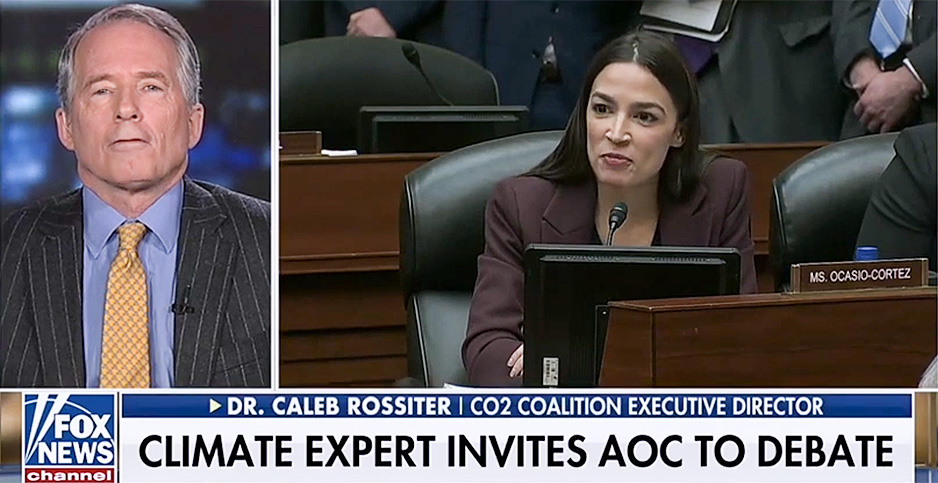 A group that touts the benefits of carbon dioxide is being blocked from getting its message to members of Congress by young Republican staffers.

The CO2 Coalition, which includes former Trump administration officials, has spent about a year trying to brief lawmakers on its assertions that climate change isn’t a problem because more carbon emissions could help feed the world. Members of the group have reached some lawmakers, but at other times have been challenged by GOP staffers who don’t buy the message that the effects of climate change are minimal, said Caleb Rossiter, the group’s executive director.

That led to another strategy: The group is trying to reach young people before they enter the workplace by traveling to college campuses.

"We find that they are scientifically challenged, I’ll be very polite," Rossiter said. "They just have very little understanding of the basic physics and geology involved in all these matters, in the climate debate. This is our way to try to reach them a little earlier and to get college campuses to listen."

Rossiter said he was frustrated that Republicans who control the Senate have not held climate hearings as a counterweight to the dozens of hearings held by House Democrats. He said he would like Sen. Roger Wicker (R-Miss.), who chairs the Commerce, Science and Technology Committee, to challenge the narrative on climate change that’s emerging from the House Select Committee on the Climate Crisis.

"The Republicans are in control of the Senate, and they could be having a hearing every day the way the House does, telling the other narrative on energy and what it does for you and how we try to clean up the world, but it’s good to get rich and live longer and have the money to do it," Rossiter said. "They could be having as many hearings as the House does, which pushes the alarmist narrative."

Wicker did not respond to a request for comment. But one of his interns attended a CO2 Coalition briefing earlier this year and said he wasn’t convinced by the presentation, which claimed that plants would thrive if humans released more carbon dioxide.

"I’m still not convinced that that’s not an issue that something needs to be done about," Sean Bland, an intern with Wicker at the time, told E&E News.

In the House, it’s hard to find young GOP staffers who reject climate science, said Alex Flint, executive director of Alliance for Market Solutions and a former staff director with the Senate Energy and Natural Resources Committee. In the last two years, his group has briefed dozens of Republican House members on climate change and only encountered one staffer who rejected climate science. That’s because those who are younger than 35 are concerned with finding ways to address it through a conservative-friendly policy, he said. Groups that try to convince congressional aides that climate change isn’t a threat will find that the "era of climate denialism has passed," Flint said.

"The college students that end up working in Congress are generally pretty smart, so you’re going to have a hard time trying to fool them with climate denialism," he said.

In the past few months, the CO2 Coalition hired a recent graduate of George Mason University with a degree in aquatic ecology in the hopes of reaching younger GOP staffers on Capitol Hill. Yesterday, she downplayed the role that human-caused climate change could have on ocean acidification for a member of Congress, the group said.

Earlier this month, members of the CO2 Coalition traveled to the University of Hartford in Connecticut to talk with students about its ideas, which climate scientists describe as inaccurate. The trip was sponsored by Turning Point USA, the pro-Trump group. Topics of discussion included "CO2’s role in a greening earth." The group also visited the University of Minnesota.

Other campuses weren’t as welcoming. Students protested a presentation by the group at Georgetown University earlier this year; Rossiter watched as campus security removed the students. To reach more young people, the coalition has been working with the conservative group Committee for a Constructive Tomorrow, which has college chapters, as a way to get a foothold with university audiences. The goal, Rossiter said, is to get young people to question climate science without feeling like they are being led by a particular viewpoint.

"That’s a victory for us, if young people even say, ‘Oh, I never knew there was another way to look at these data or conclusions about the IPCC’s data on hurricanes or what CO2 does to plants,’" he said, referring to the Intergovernmental Panel on Climate Change. "For us, that’s just the opening to a conversation."

The CO2 Coalition was founded by William Happer, a Princeton University emeritus physics professor who was a senior director on the White House National Security Council until earlier this year, and Roger Cohen, a former executive at Exxon Mobil Corp. Happer left the White House this summer after his efforts to conduct a hostile review of climate science was shelved by White House officials. Happer has rejoined the CO2 Coalition, which receives a bulk of its funding from conservative organizations that oppose regulations, including the Mercer family and the Koch network. Happer plans to travel to Spain next month to criticize the United Nations’ international climate talks being held in Madrid. The name of his event is "Rebutting the United Nations’ climate delusion."

Members of the CO2 Coalition include former Trump administration officials such as Mandy Gunasekara, a former EPA official who describes herself as an architect of the Trump administration’s withdrawal from the Paris Agreement. It also includes a number of scientists who minimize the effects of climate change. At a recent meeting of its members, the group decided that it needed to reach a wider audience by condensing its science into small sound bites that are more easily understood. The coalition is now rolling out minutelong videos that portray its version of science.

The group has met with members of Congress in the last year, with some success. After receiving a briefing from the CO2 Coalition, Reps. Paul Gosar (R-Ariz.) and James Comer (R-Ky.) have repeated the group’s talking points in public committee meetings.

But Rossiter has also conceded that the conservative narrative that his side is "winning" the climate debate is misplaced. On Tuesday, at an event sponsored by the Texas Public Policy Foundation, speakers from conservative groups mocked Rep. Alexandria Ocasio-Cortez (D-N.Y.) and said the Green New Deal made it easier to argue their case against more stringent carbon regulations.

Rossiter doesn’t see it that way. He told the crowd that Ocasio-Cortez was winning because she had forced the issue into a wider public arena.

"AOC has completely succeeded by driving the debate, took a crazy idea called the Green New Deal, the end of fossil fuels, and it’s now a major presidentially debated topic," he said.

Rossiter admitted that even he struggles at times to resist internalizing assertions by NASA and the world’s science agencies that climate change is having a pronounced effect on the globe and that it’s bound to get worse.

"That is a very successful tactic, their narrative is winning," he said. "Katrina, Harvey, you name your storm and people automatically think, I think when I go out in the morning, ‘Oh, it’s a hot day today, I wonder if that is part of the climate change trend.’ And I know it’s not."

Correction: Due to an editing error, an earlier version of this story inaccurately said Rossiter personally requested Sen. Roger Wicker, through his office, to hold climate-related hearings. Rossiter would like Wicker’s committee to hold hearings, but has not requested them.