Youth climate activist on ‘holding my nose and voting’ for Biden 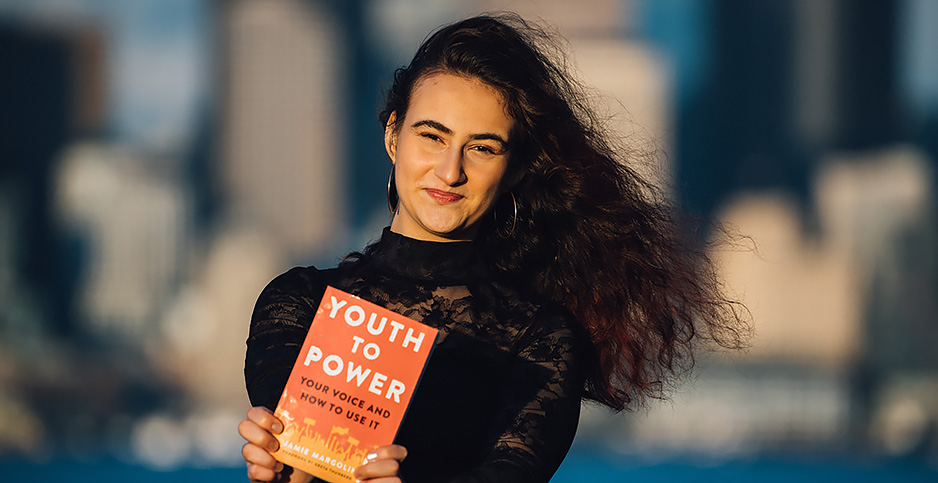 Jamie Margolin has launched a climate coalition, published a book and organized a national climate march — all before graduating from high school.

Margolin, 18, is the co-founder of Zero Hour, a youth-led organization that aims to hold elected officials accountable for global warming.

This week, she was a delegate at the Democratic National Convention, where she cast a symbolic vote for Sen. Bernie Sanders (I-Vt.).

"I will be voting for Biden. But it’s not a happy or enthusiastic vote. I will be kind of holding my nose and voting for him," she said in a recent interview.

Margolin has testified on Capitol Hill and published the book "Youth to Power: Your Voice and How to Use It," which contains a foreword by Swedish teenage climate activist Greta Thunberg.

How did you first become interested in climate change?

I mean, it’s not really a matter of interest. It’s more that this issue has always been looming over my generation and our future. The climate crisis has kind of always been there — I can’t even pinpoint the exact moment I learned about it. But I started to get really involved and take action when I was 14, around the 2016 election cycle.

Why did you decide to help found Zero Hour?

In the summer of 2017, I was doing a lot of work in my community, but I felt like politicians at the local and national level weren’t taking concrete action or even paying attention. So I wanted to organize a mass mobilization of young people demanding urgent climate action. I had a vision of a bunch of young people marching in the streets for climate justice. So I found a way to make that happen. And the group that organized the march became Zero Hour.

Do you think elected leaders are taking the younger generation’s demands for climate action seriously?

And lip service means nothing when we’re literally in a climate emergency. I don’t even know what I’m supposed to do with what they’ve given me. I can’t work with empty words.

What do you think of Joe Biden’s updated climate plan? Is it aggressive enough?

I think it’s a lot better than the previous version, but it’s still not enough. In the end, lowering emissions is not a matter of opinion; it’s a matter of science. And in terms of the actual science and what needs to be done to solve this issue, he still needs to go a little further.

Do you plan to vote for Biden in November?

I will be voting for Biden. But it’s not a happy or enthusiastic vote. I will be kind of holding my nose and voting for him. It’s that kind of situation.

What are your thoughts on Sen. Kamala Harris [D-Calif.] as Biden’s running mate?

She is whom I expected him to pick. I’m a bit nervous because neither Joe Biden or Kamala Harris have outstanding climate records. So the movement has our work cut out for us making sure we keep the pressure on both Joe Biden and Kamala Harris to actually take a stand for climate action. And it’s not just the climate crisis, but also for other issues — we have to keep the pressure on Kamala and Joe Biden to make sure we get the change we seek.

How do you see your role in this election?

Right now, my plan is not to campaign and be like, "Vote for Biden, everyone!" I won’t be shouting Biden’s name from the rooftops. I’m just going to focus on getting as many people registered and out to the polls as possible.

But obviously, I want [President] Trump out of office immediately. And I hope that my actions will have an effect on getting Trump out.

Do you have any hope that if Biden is elected, climate activists could pressure him to increase his climate ambitions?

I mean, Trump is not swayable at all. Trump is just a lost cause. So at least with Biden, we could potentially have some sway. I do think Biden can be influenced.

You recently participated in a livestreamed conversation about climate policy with [Republican former Ohio Gov.] John Kasich. What was that experience like?

It was an incredibly frustrating experience. I was there to supposedly have a conversation about climate action and climate justice. But [Kasich] just wanted to dodge and deny the science. He didn’t fully believe how urgent this issue was. And I can’t have a normal conversation with someone who doesn’t even accept the basic facts.

The journalist Emily Atkin, who organized the conversation, wrote in her climate newsletter Heated that Kasich "patronized" and "disrespected" you. Do you agree with that characterization?

Yeah, I do. I’m a young woman, and he was very condescending in a way that I don’t think he would’ve been if I were a boy. He also kept acting surprised that I was so articulate. Like, "Oh, cool, I can talk." So he was definitely patronizing. And I feel like if I weren’t a young girl, he might’ve treated me with some more respect.

Who else has spoken to you that way?

A lot of times, it’s elected officials and corporate leaders, and also just older white men in the sustainability space. They can just be kind of condescending.

What is your new book, "Youth to Power," about?

The book is pretty much a guide to being a youth organizer and activist. When I first started to get involved in being a climate justice organizer, it was really difficult to find my footing. For a long time, I just learned by trial and error and making mistakes.

Once I really established myself as an organizer, I got a lot of questions from so many young people who said, "How do I get involved? How do I do what you’re doing?" I realized that there was really a need for a guide. So now, when someone asks me that, I give them the book as an ultimate answer.

In addition to climate change, you’re a vocal advocate for LGBTQ rights. Why are you passionate about that?

Well, I’m passionate about that because I’m a lesbian, so everything in terms of LGBTQ rights affects me. I also grew up hardly ever seeing girls like me on television or in movies. And seeing my story being erased from the mainstream was hard. It made me feel super alone.

So I think representation is incredibly important. And that’s why I’m going to film school, to tell the stories that I always wished I would’ve seen on screen.

Where are you going to film school?

I’m keeping that off the record for now because I want to make the announcement in my own time. I’ll be posting it on my social media soon, though.

Have you watched any good TV shows or movies lately?

I mean, I love a good TV show, and recently I’ve been very obsessed with the "Harley Quinn" animated series on the DC Universe app. It’s so good. I also binge-watched all of "She-Ra and the Princesses of Power" in three days. So I watched five seasons in three days. That’s how obsessed I was with that show. And I’m constantly dancing around my house with my headphones in listening to music. Like, that’s my happy place.