Youth turnout is down. Does that mean climate is out? 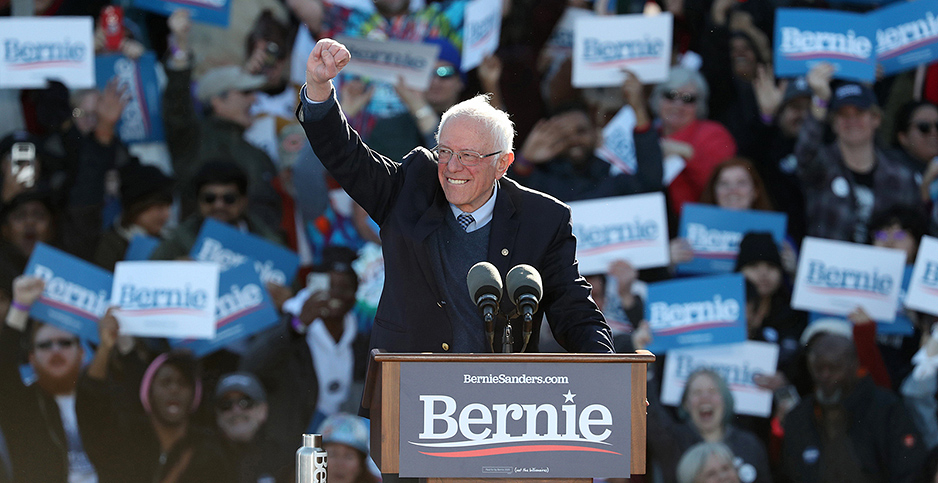 Young voters have been a pillar of Sen. Bernie Sanders' strength in his quest for the presidency, but many of them are not voting in key primaries. John J. Kim/TNS/Newscom

Exit polling from Edison Research, which shares its data with numerous news outlets, including CNN and the Associated Press, has shown that the youth vote is generally underperforming in the presidential primary contests so far when compared with the 2016 primaries.

The figures are troubling environmentalists who see young voters as a major force in the drive to make climate a higher priority in U.S. policy. That’s because polling shows climate change is a priority for young voters.

Gallup found last year that 67% of Americans between 18 and 29 were concerned about climate change. By comparison, only 47% of voters 65 and older were concerned.

The climate age gap is far more pronounced among Republicans than Democrats, but the gap still exists for Democrats.

An analysis last year by the Yale Program on Climate Change Communication found that 81% of millennial Democrats believe climate change is human-caused, compared with 74% of baby boomers and the silent generation, those born between 1928 and 1945.

But on the same question, 42% of millennial Republicans agreed on human causation, versus 19% of the silent generation.

Furthermore, millennials and Generation Z together represent the largest voting bloc this year, potentially yielding big dividends to candidates who can get them to the polls.

The Sunrise Movement, for one, is noticing. The climate activist group, which supports Sen. Bernie Sanders (I-Vt.) for president, has been working tirelessly to get young people out to vote with a climate message.

"There is no way to defeat Tr•mp without record youth turnout," the organization tweeted March 3 as primary ballots from California were being counted, and exit polls showed that 18-to-29-year-olds and 30-to-44-year-olds preferred Sanders in the Golden State, while older demographics went for former Vice President Joe Biden.

Sunrise joined with other youth-focused progressive groups Wednesday to protest outside the Democratic National Committee’s headquarters and pressure it to focus more heavily on youth voters and the issues that matter to them, such as protections for immigrants in the country illegally and racial justice.

"It is increasingly clear that there is a generational divide in the Democratic Party right now. Young people are turning out to vote for the issues that matter to us, but our issues are being ignored by the media and the Democratic establishment," Evan Weber, Sunrise’s political director, said at the event.

"The conversation in this election cycle so far has focused entirely on this question of electability. But the truth is that if the Democrats are not serious about reaching out to young people and mobilizing us in November, that is going to be their biggest electability liability come Nov. 3."

While the Democratic presidential debate between Sanders and Biden on Sunday night ended up focusing on the new coronavirus outbreak, the moderators and candidates did have a substantive conversation on climate and the differences between the plans put forward by the two candidates.

Pressed by Sanders, Biden seemed to say he would end hydraulic fracturing, but his campaign later walked it back (E&E Daily, March 16).

Sanders has been sounding the alarm over low young-voter turnout, acknowledging that it’s hurting him and helping Biden.

"Have we been as successful as I would hope in bringing in young people? And the answer is ‘no,’" he said the day after Super Tuesday.

"We’re making some progress, but historically, everybody knows that young people do not vote in the kind of numbers that older people vote," he continued, predicting that youth turnout would recover in the general election in November.

After the March 10 primaries, which included Michigan, Sanders framed the divide in a more favorable light.

"It is not just the ideological debate that our progressive movement is winning. We are winning the generational debate. While Joe Biden continues to do well with older Americans, especially those over age 65, our campaign continues to win the vast majority of the voters of younger people," Sanders said.

Biden’s lead comes despite the popularity, across age groups, of Sanders’ proposals. For example, a Washington Post/Kaiser Family Foundation poll taken in July and August 2019 found majority support for many provisions of the Green New Deal, including getting the power sector to net-zero greenhouse gas emissions in 10 years and a federal jobs guarantee.

The drop in youth voters, while its hurting Sanders this year, might not be as large as it seems.

"We usually prefer to do an apples-to-apples comparison," said Abby Kiesa, who researches youth political engagement at Tufts University’s Center for Information & Research on Civic Learning and Engagement.

She said that while most comparisons are looking at 2020’s drops from 2016, a better comparison is with other presidential election years in which just one party had a competitive primary.