Zinke cut Fla. from 5-year plan. Can he do that? 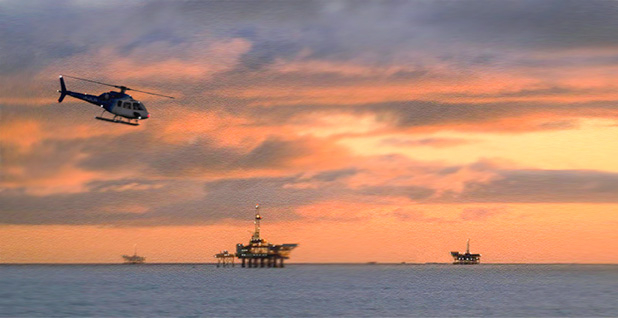 With an announcement from Interior Secretary Ryan Zinke and Gov. Rick Scott (R) yesterday, the sun appears to be setting on the prospect of drilling off Florida's coasts. Bureau of Ocean Energy Management/Flickr

Chief among those queries: Can Interior do this?

After meeting with Gov. Rick Scott (R) on Tuesday evening, Interior Secretary Ryan Zinke tweeted that no new oil and gas platforms would appear off Florida’s coasts (Energywire, Jan. 10). The Bureau of Ocean Energy Management’s draft proposed plan, rolled out last week, would have opened nearly all of the U.S. outer continental shelf to oil and gas leasing.

"As long as BOEM adheres to its prescribed comment periods and addresses feedback from commenters, my understanding is that removal of all or part of a Planning Area would comport with both the Outer Continental Shelf Lands Act (OCSLA) and the Administrative Procedure Act," Kevin Book, managing director of research for ClearView Energy Partners LLC, wrote in an email.

The fact that the announcement came as a tweet led Book to believe the withdrawal was less of a definitive decision than an indication of where the department is heading as it crafts its final program.

"I would not necessarily regard the terms of a tweet as definitive," Book wrote. "THAT, to the best of my knowledge, DOES NOT comport with BOEM procedure. Instead, the agency seems likely to incorporate Gov. Scott’s feedback and proceed from there."

Interior contends that the announcement was not rolled out on Twitter. All official press advisories came through Scott’s office.

The comment period for the draft plan, which was published in the Federal Register on Monday, is still open. Plan documents still include Florida’s waters as among the areas under consideration for leasing.

Interior’s reversal on Florida flies in the face of the processes laid out in OCSLA, said David Hayes, who served as deputy secretary of the department under former Presidents Obama and Clinton.

The decision should have the department’s attorneys "cringing," said Hayes, who is now executive director of the State Energy & Environmental Impact Center at New York University School of Law.

"This incident provides Exhibit A that the Interior Department is treating a deadly serious matter as a political exercise," he said. "Even a cursory examination of the extensive public record regarding the potential opening up the Atlantic, the eastern Gulf and the Pacific to oil and gas drilling would have shown that a number of key states — including but certainly not limited to Florida — are dead set against drilling off their coasts. California, Oregon, Massachusetts, New Jersey, New York, Maryland and many others are just as strongly opposed."

"California is also ‘unique’ & our ‘coasts are heavily reliant on tourism as an economic driver,’" state Attorney General Xavier Becerra (D) tweeted, citing some of Zinke’s reasons for excluding Florida from the program. "Our ‘local and state voice’ is firmly opposed to any and all offshore drilling.

"If that’s your standard, we, too, should be removed from your list. Immediately."

Tweets from state leaders are not official meeting requests from governors to the secretary, said Interior spokeswoman Heather Swift.

"The governor of Florida requested a meeting the day the plan was announced," she said. "By comparison, the California and Virginia governors hadn’t requested meetings with the secretary. However, they are welcome and encouraged to do so if they’d like to voice their positions to the secretary."

Swift said that Zinke intends to meet with any governor who requests a meeting.

California Gov. Jerry Brown (D) said yesterday during a budget press conference that he would be pursuing a similar decision for his state, according to the governor’s press office.

"We are certainly going to ask for that exemption here, and I’m hoping that [Interior] will be responsive," Brown said.

Removing Florida from the program changes the game for other states that want exclusions, said Jim McElfish, senior attorney and director of the sustainable land use program at the Environmental Law Institute.

"Allegedly that door is opened by going through this long process," he said. "Whether or not the administration will pay attention to or regard other states’ comments we can’t really predict, but it’s entirely possible that other areas will be removed."

Observers of the fallout following the Florida announcement were wary of its ramifications for the process.

"This does not portend well for the department’s ability to engage in a disciplined, transparent, broad-based and fair process," Hayes said.

"OCSLA clearly outlines a deliberative, inclusive and lengthy review process before any preliminary leasing proposals are finalized," National Ocean Industries Association President Randall Luthi said in a statement. "The conversation to be had around the draft proposed offshore leasing plan should include modern technology, science and America’s energy demand and security."

In a follow-up conversation with E&E News, Luthi said he doesn’t necessarily believe the agency is acting outside its OCSLA authorities, but that Florida’s removal from the program took away the opportunity for meaningful dialogue on whether to lease there.

"The Gulf of Mexico is the backbone of our nation’s offshore energy production, and restricting access to the eastern Gulf puts hundreds of thousands of jobs at risk across the country and along the Gulf Coast, particularly in Florida, Alabama, Louisiana, Texas and Mississippi," Gerard said.

For groups that supported a smaller offshore program, the withdrawal was encouraging — but frustratingly arbitrary.

"We’re happy that Florida’s out," said Nat Mund, director of federal affairs for the Southern Environmental Law Center. "We just think the same protections should be afforded to other states, as well."

Because there was so little information as to the basis for Interior’s decision, it’s also unclear whether the withdrawal will stick, said Mund.

"Could Zinke tomorrow tweet out and say, ‘Just kidding, Florida’s back in’?" Mund asked.