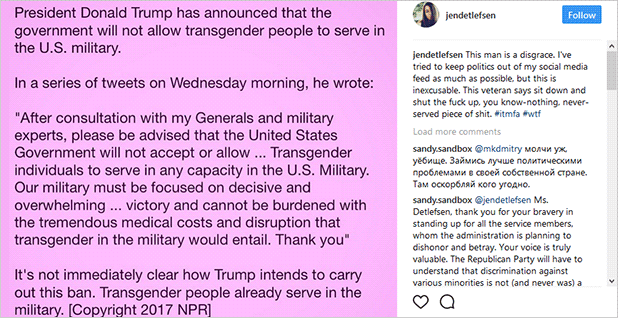 Like her father, Zinke’s daughter, Jen Detlefsen, is a Navy veteran. She is also a Virginia-based glass artist who frequently posts images of her work to Instagram.

Following Trump’s surprise decision to ban transgender service members from the military in late July, Detlefsen posted a screenshot of an NPR story along with criticism of the chief executive.

"This man is a disgrace. I’ve tried to keep politics out of my social media feed as much as possible, but this is inexcusable," Detlefsen commented on her post, first reported by The Missoulian in Montana on Friday after Trump signed an order detailing the ban.

Detlefsen also wrote: "This veteran says sit down and shut the fuck up, you know-nothing, never-served piece of shit."

She added the hashtags #itmfa and #wtf. The former is shorthand for "impeach the motherfucker already," a campaign launched by sex columnist Dan Savage and supported by organizations like the American Civil Liberties Union.

"My views are my own and not at all related to my father’s position; millions of other people have said the same as I did, and more eloquently," Detlefsen told E&E News in a statement. "The thousands of transgender military service members who are under attack by this administration are the ones who should be given a chance to have their voices heard."

But Detlefsen did respond to numerous comments on her post, highlighting both her own military service as well as Democratic presidential nominee Hillary Clinton’s popular vote victory in the 2016 election.

"When you call the President ‘a piece of shit’ you insult the 60 million Americans who voted for him," wrote another Instagram user identified as bbbaast.

"As opposed to the 65,844,954 people who voted for Clinton?" Detlefsen responded. "But yes. I agree with you. I could have, perhaps should have, used more elegant language. I didn’t because I was — and am — angry. But the president himself is lowering the level of discourse in our political climate, so please point that finger elsewhere."

Although several commenters highlighted Detlefsen’s family ties to the administration via her father, a former Montana House lawmaker before joining the Trump Cabinet, she did not mention Zinke in her responses.

"Maybe Trump didn’t serve but I sure did," wrote user josephmburke7. "He represents ME! Do you want to tell me to my face to shut up? If you do then all I can tell you is that you will definitely need yours [sic] safe space. I don’t care who your daddy is."

Detlefsen replied: "You served. So did I. You have your opinion. So do I. I am disgusted that a Commander In Chief would so callously disregard the service and sacrifice of the thousands of transgender soldiers, sailors and airmen already putting their lives on the line for our county. And you can take your machismo posturing elsewhere. I’m not afraid of you or your threats."

"And what about your own father? He is a disgrace to our environment," the commenter wrote. "He is ruining this planet one back-door deal at a time. At this rate our children’s children will only know suffering and mass migration due to climate change. Please, I implore you, use that good head on your shoulders to talk some sense into your father."

The Interior Department did not immediately return a request for comment to E&E News on Zinke’s view of the transgender ban or his daughter’s public comments.

But on Friday, spokeswoman Heather Swift told the Missoulian that she would not comment on a matter unrelated to the Interior Department.

"Family members are not elected officials and deserve privacy and respect," Swift told the paper.