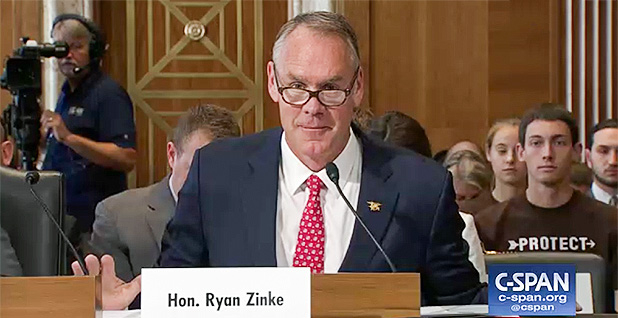 Interior Secretary Ryan Zinke indicated today that the department is looking at relocating more resources out West as part of a larger management reorganization.

"We’re looking at appropriately moving assets where they should be," and that’s where the "preponderance of land is," Zinke told the Senate Energy and Natural Resources Committee during a hearing on the administration’s proposed fiscal 2018 budget. He noted that most of the acreage managed by the Bureau of Land Management is out West.

"We’re going to push the assets where the land is," said Zinke, adding that he’ll need Congress’ help to carry out certain aspects of the reorganization, though he did not elaborate.

"The way we are organized currently is, we’re all different bureaus reporting to different regions," Zinke said. "We’re not very good at joint operations," he added. He gave an example of a river with both trout and salmon, meaning different agencies inside and outside of Interior could have jurisdiction.

Sen. Cory Gardner (R-Colo.) and Rep. Scott Tipton (R-Colo.) have introduced legislation that would shift BLM’s headquarters from Washington to one of 12 Western states.

Zinke, who fielded a range of questions today about programs facing cuts under President Trump’s fiscal 2018 budget request for Interior, said he’s continuing to freeze hiring in Washington and Denver, "prioritizing filling field positions rather than office positions." The secretary said he wanted to "shore up and expand" the front lines of employees at national parks and is looking at returning scientists at the U.S. Geological Survey to the field.

In his submitted testimony, Zinke said the proposed budget envisions a reduction of about 4,000 full-time department staff from 2017 levels.

Last week, The Washington Post reported that Zinke had notified dozens of career officials — members of the Senior Executive Service — that they will be reassigned at the end of this month (Greenwire, June 16).

Agencies have the authority to reassign senior executives, though many of them haven’t used that authority liberally over the years. The Obama administration proposed making the governmentwide SES more mobile and reassigning them more frequently to different jobs and geographic regions.

Zinke said Interior has "good people" but is really "heavy on the bureaucracy," especially in Washington.

Senators, like their House counterparts who questioned Zinke earlier this month, outlined concerns about the department’s $11.7 billion budget request and its proposed cuts affecting a host of programs, including the Land and Water Conservation Fund, the payments in lieu of taxes program, offshore revenue-sharing, and American Indian health and education — not to mention programs specific to lawmakers’ districts.

Sen. Lisa Murkowski (R-Alaska), Energy and Natural Resources chairwoman, said the panel will review "all of the cuts this budget proposes very carefully" and that she doesn’t "expect many of them to become reality." For example, recommendations to end offshore revenue-sharing for Gulf Coast states is a proposal she doesn’t see "going anywhere."

The Alaskan, who praised the budget proposal for supporting oil and gas drilling in a portion of the Arctic National Wildlife Refuge, said she believed the budget’s positives outweigh the negatives. "For every item that many of us will not be able to support, there is another that we can. And I haven’t been able to make that statement for quite some time."

Several senators of both parties asked about the department’s review of 27 national monuments, since many of those sites are in committee members’ states.

Sen. Maria Cantwell (D-Wash.), the panel’s ranking member, pressed Zinke on the department’s move to pump the brakes on the BLM methane rule (see related story). Congress defeated a resolution in May that would have overturned the Obama-era rule. Cantwell asked if Zinke was going to "drag his feet" in implementing the rule and flout the 1946 Administrative Procedure Act.

The Interior secretary reiterated that he believed "flaring is a waste" and that the department was looking at ways to incentivize the capture of methane as well as assessing how to implement the rule.

"I don’t drag my feet," Zinke said, sighing a bit. "I don’t operate that way. As far as the law goes, I support the law; that’s my obligation to do so."