Zinke headlines scream scandal. Some of them are off base 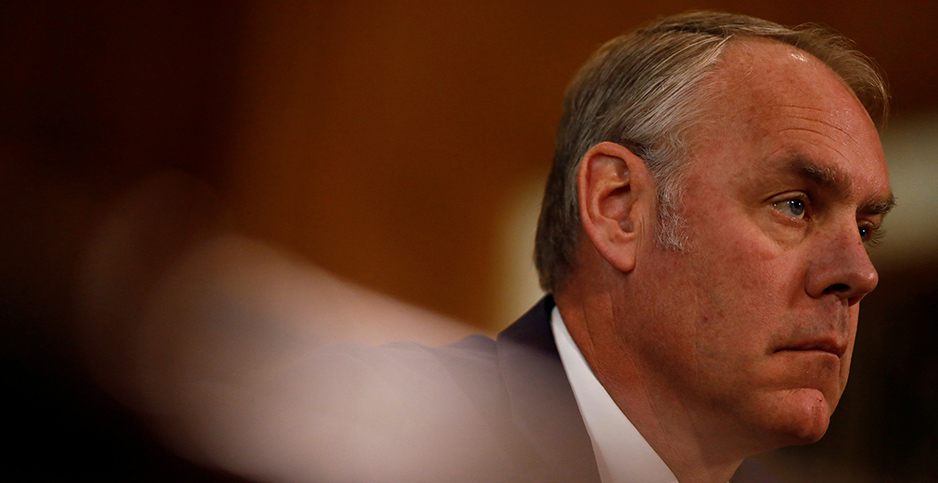 Brutally simplified storylines now swirl around Interior Secretary Ryan Zinke, clouding his future even while some stretch the known facts.

Zinke "is the subject" of more than a dozen investigations. Not quite.

Zinke "tried to fire the inspector general." No, though it’s still a bizarre episode.

Zinke is "embattled"? That is undeniable, however unfair it might seem to the former Navy SEAL and his lieutenants.

In the wake of reports that Interior’s Office of Inspector General has referred an unspecified Zinke-related investigation to the Justice Department, Zinke’s post-election job prospects have come under question as never before (Greenwire, Oct. 31).

"It’s time for Secretary Zinke to resign and allow the department to move past his troubled tenure and focus on fulfilling its vital mission," Western Values Project Executive Director Chris Saeger said today.

Saeger’s opposition to Zinke is nothing new, and it won’t sway the Trump administration. It comes, however, amid an ominous pileup that includes a New York Times story yesterday titled "A Guide to the Ryan Zinke Investigations" and a Politico story today about Zinke’s "heir apparent."

A similar plot has played out before in this administration and in others. Allegations surround an official. Scrutiny intensifies. Rhetorical shorthand exaggerates claims and erases subtleties. Leaks expand. The official’s position weakens until departure appears inevitable.

Former EPA Administrator Scott Pruitt could testify to this sequence of events, which ultimately resulted in his resignation.

Interior officials did not respond to requests for comment for this story.

For Zinke, his allies and others in their position, following President Trump’s lead in denouncing the media and critics is a common defense.

"Having been a subject of #fake news frequently, I don’t think I can ever trust #CNN & #FakeNewsMedia," Zinke’s wife, Lolita Zinke, wrote on Twitter last December, while retweeting criticism of CNN’s coverage of other issues (Greenwire, Dec. 12, 2017).

Zinke himself, in 2017, dismissed early complaints about his use of charter and military flights while in office as "a little B.S."

The present-tense "is," though, may mislead. A number of inquiries have been closed. "Subject," too, poses problems, as some of the investigations don’t deal with Zinke directly. Even the heaviness of "investigation" may overstate the case; one complaint to the Office of Special Counsel involved Zinke tweeting a photo of his Make America Great Again socks.

To be sure, other ongoing IG investigations are quite serious, including separate inquiries into Zinke’s business dealings in his hometown of Whitefish, Mont., and Interior’s handling of a tribal casino application in Connecticut.

Zinke’s relationship to his department’s IG office has been another episode that’s gotten summed up and added to the litany, to his detriment.

Interior lacks a Senate-confirmed IG. The office is headed by a deputy IG, Mary Kendall. Moreover, there’s no public evidence that anyone tried to fire her. Instead, in a strange turn of events, Housing and Urban Development Secretary Ben Carson declared that one of his deputies was going to become Interior’s IG, presumably leaving Kendall as deputy.

The move never happened, and while the still-mysterious story has yet to be fully fleshed out, Interior officials cast Zinke as blameless.

"This is a classic example of the media jumping to conclusions and reporting before all facts are known," Interior declared in a statement.

Most recently, Salon reported yesterday that Zinke "equates Martin Luther King Jr. to Robert E. Lee." Given a quick glance, that headline could leave a definite impression about a comment that might also be read as an awkward metaphor.

While speaking at the designation of Camp Nelson, a Union recruitment base in Kentucky for black soldiers during the Civil War, as a national monument, Zinke likened the placement of the Martin Luther King Jr. Memorial to that of Arlington National Cemetery, located on land once owned by Robert E. Lee, and of the Lincoln Memorial.