Zinke is a ‘beast’ — with listening skills 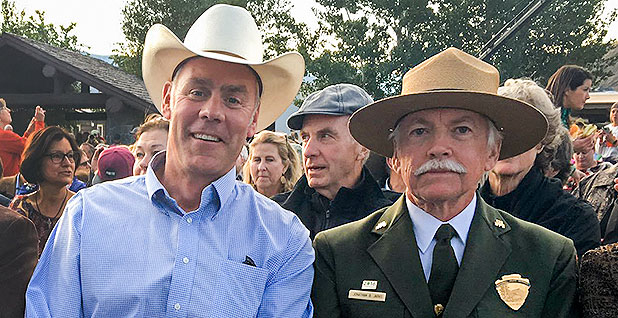 It was morning on Montana’s first legislative day in 2009 when Greg Barkus got a phone call from Ryan Zinke, an incoming freshman senator and his friend.

Both of them lived in the Flathead, an area where mountains crowd the horizon on the western side of the state. It’s more than 200 miles from the state capital, and Zinke had turned down an offer by Barkus, a Republican state senator at the time, to drive down together.

Born and raised in Montana, where the glory — and guts — of nature is part of life, Zinke took the accident in stride. And he got to work as a lawmaker. He went on to serve two terms in the state Senate and ran for lieutenant governor. Then, after he won his second term as Montana’s lone congressman in November, President-elect Donald Trump tapped him to run the Department of the Interior.

Folks who know him from the Big Sky State say anyone who grows up in Montana can’t easily forget its public lands. Environmental groups, appalled at Trump’s Cabinet picks, are clinging to some hope that Zinke won’t undo the Obama administration’s work to protect lands and incorporate climate change into policy.

"He grew up a stone’s throw from Glacier National Park," said Dave Wanzenried, a Democratic state senator who served on two committees with Zinke. "Anyone who has been in that pristine setting would be hard-pressed not to recall that, because it becomes ingrained. It has to have an impact on you."

A strong safety and a guard in high school, Zinke went on to play football as a center with a full ride at the University of Oregon. When he wasn’t training, Zinke studied geology, "as a result of closing my eyes and randomly pointing to a major from the academic catalog," he wrote in his autobiography.

"Let’s just say the effect was less than professional," he wrote.

By August 1986, he had his first assignment with the Navy’s elite special forces, the SEALs.

Zinke’s military record is robust. In his more than two decades of service, he commanded the elite SEAL Team Six and was awarded two Bronze Stars while serving as the acting commander of special forces in Iraq.

Brandon Webb served with Zinke in the SEALs. Webb, a former sniper who went on to found the Hurricane Group, a media and entertainment company focused on military news, said that as his boss, Zinke always had Webb’s interests at heart, even when Webb made the tough decision to leave the service to spend more time with his kids.

Wanzenried, Zinke’s colleague in the state Senate, said Zinke’s military background shone through. He directly questioned witnesses or other committee members during legislative hearings and "carried an aura of self-assurance," he said.

Early on, Hedges said, Zinke supported legislation that would have strengthened Montana’s equivalent to the National Environmental Policy Act. After his actions drew the ire of Republican leadership, she said, his positions changed.

Many of his colleagues reiterated Zinke’s "Roosevelt style" of public lands management. Theodore Roosevelt, known as the "conservation president," famously created the Forest Service to manage the nation’s forests for multiple uses and placed 230 million acres of public lands under protection.

"Like Teddy, I believe our lands are worth cherishing for the greater good," he wrote. "Selling off our public lands is a non-starter. I’ve voted against budget resolutions and bucked party leadership on more than a couple occasions to defend our lands."

Peter Aengst, senior regional director with the Wilderness Society, said Zinke’s record — although better than those of many of the other candidates floated to head the Interior Department — does not live up to Roosevelt’s legacy. And it contains some striking red flags.

There are two instances greens point to when challenging Zinke’s oft-stated position that public lands should remain public.

Conservation and sportsmen’s groups decried the congressman’s vote Tuesday night in support of a rule introduced by Rep. Rob Bishop (R-Utah) that would designate federal land transfers as cost-free. The change, part of a larger House rules package that passed the chamber, means lawmakers who want to offload federal lands to the states would no longer have to find spending offsets to authorize transfers (Greenwire, Jan. 5).

In an email, Zinke’s press secretary, Heather Swift, said the congressman’s position against selling lands has not changed.

"On climate change and energy, he hasn’t been so great," Aengst said. "My hope is we could see Ryan Zinke take more positions in line with where he started his political career and in line with the Teddy Roosevelt approach, rather than just following along with what the fossil fuel industry wants."

"He explained he was in combat across several continents, and the vice chair wasn’t going to pressure him," Lewis said. "The one piece of advice I’d give to all the lobbyists and everyone else is don’t lean on him. He’s his own man."

"We’d jump in his car and haul ass back to Whitefish to go skiing," he said. "When you’re in session, it’s six days a week, so we’d get away to go skiing and have a beer. That’s the real Ryan."

In 2012, Zinke announced he would run for lieutenant governor with Republican gubernatorial candidate Neil Livingstone, an eccentric national security consultant who has spent much of his career in Washington. As Livingstone’s running mate, Zinke traveled across the state gaining notoriety.

"I think really what it did was raise his profile statewide," said former Senate colleague Brueggeman. "It gave him a footing … to run for Congress."

The next year, Zinke announced his candidacy for Montana’s only U.S. House seat.

He and his wife spent days on a campaign bus, with Zinke’s tanned face plastered to the side, as the candidate traversed Montana’s vast geography.

"With the number of hours he slept, often, it’s almost inhuman," DeMars added.

"Running along, shaking hands, talking along the way," DeMars said. "Anything with large crowds of people where he could just down and converse about issues, that’s something I think is really unique."