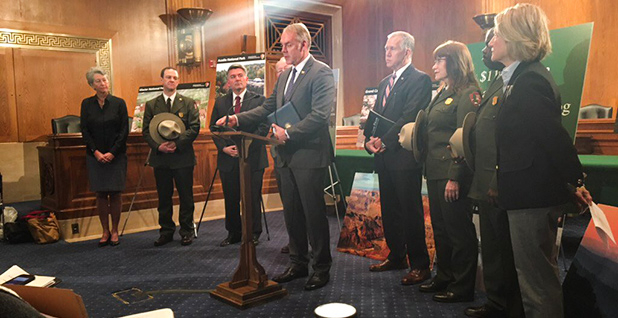 Seeking to fix an $11.6 billion maintenance backlog in the national parks, Interior Secretary Ryan Zinke found help today when a bipartisan group of eight senators introduced legislation that would use revenue from new energy development to pay for delayed park projects.

Appearing with the senators at a Capitol Hill news conference, Zinke called the plan "unprecedented in scale" and predicted that it will win backing from Democrats and Republicans alike in Congress.

"Americans deserve to have a park system that’s well-funded, that’s well-operated, and the visitor experience in our parks should remain sacred. … Our parks are red, white and blue," Zinke said.

The bill would create a new national park restoration fund, using 50 percent of the revenue from new energy receipts to pay for park maintenance.

While Zinke and the senators provided no estimates of how much funding the legislation might raise for parks in any given year, Sen. Lamar Alexander (R-Tenn.), the bill’s chief sponsor, said it could eliminate the entire backlog within a decade.

"Everyone who cares about the national parks should welcome this proposal by the secretary," Alexander said.

The plan announced today is narrower than a proposal included in President Trump’s fiscal 2019 budget proposal, focusing only on the nation’s 417 park sites.

When the budget was released last month, Zinke said he wanted to use energy receipts to pay for maintenance at parks, wildlife refuges and American Indian schools. He said the president’s proposed public lands infrastructure fund could provide up to $18 billion over 10 years, more than enough to wipe out the entire backlog of deferred maintenance.

"This bill is the largest investment in national parks in our nation’s history," Zinke said.

He said that revenue for the fund would come from all sources of energy, not just oil and gas.

Opponents say the proposal is a lot of hype, arguing that it would be impossible for parks to plan for long-term projects, since money for the fund would be linked to future oil and gas production.

When House members discussed Zinke’s proposal at a hearing of the Natural Resources Committee yesterday, ranking member Raúl Grijalva (D-Ariz.) said parks would be forced to rely on "a wish and a hope that energy production is so robust, so huge" that it might actually yield funds for maintenance.

Republican Rep. Mike Simpson of Idaho and Democratic Rep. Kurt Schrader of Oregon plan to introduce a companion bill in the House.

The National Park Service spent more than $650 million on maintenance and repair work in fiscal 2017, but the backlog has been a perennial headache, ranging between $11 billion and $12 billion since 2010.

Park officials want Congress to approve funding for a long list of projects, including more than $800 million for the National Mall in Washington; more than $90 million to fix showers, campgrounds and lodges at Everglades National Park in Florida that were hit by a hurricane more than a decade ago; and $34 million to stabilize the Ellis Island sea wall in New York.