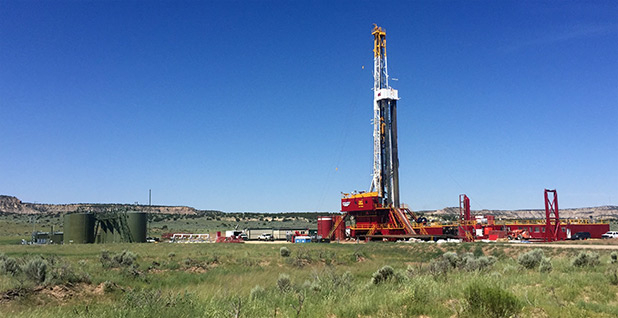 The Trump administration is taking a victory lap after a two-day oil and natural gas lease sale in southeast New Mexico garnered nearly $1 billion in bids, a fact the Interior Department says underscores the importance of the administration’s "energy dominance" campaign.

This week’s lease sale in the Permian Basin resulted in bids totaling a record $972 million — more than doubling in two days the Bureau of Land Management’s previous record for an entire sales year, set in 2008.

Interior Secretary Ryan Zinke said the record-breaking lease sale event, held Wednesday and yesterday, illustrates that President Trump’s commitment to "American Energy Dominance" is working despite criticism that the administration is simply giving away public lands to the oil and gas industry.

"Critics of the administration’s American Energy Dominance policy often falsely claim there is little to no interest in federal oil and gas leases. Today, they are eating their words and once again President Trump’s policies are bearing fruit for the American people," Zinke said in a statement.

"This historic lease sale shows what is possible when we leverage the vast natural resources we have in our country, using innovation, best science, and best practices," Zinke added. "We can ensure reliable, safe, abundant, and affordable energy for all Americans, and New Mexico is a centerpiece of our all-of-the-above energy future."

The lease sale included 142 parcels covering a total of 50,796 acres of federal land in the Permian Basin, according to a BLM spokesman.

Nearly half the close to $1 billion in lease revenues generated from the sale will go to the state of New Mexico.

Successful bidders must still file applications for permit to drill before any production can begin. But if the leases do result in oil and gas production, a portion of the royalties will also go to the state of New Mexico.

Kathleen Sgamma, president of the Denver-based Western Energy Alliance, called the $972 million in bids a "jaw-dropping amount for 142 parcels."

Sgamma also echoed Zinke’s comments, saying that it "shows there’s real interest in development on federal lands and the Permian Basin. That huge sum will contribute further to the budget surplus that New Mexico enjoys thanks to the oil and natural gas industry."

Sgamma was referring to an estimated $1.2 billion in additional state revenues due mostly to record oil production.

But conservation groups struck back.

"There’s nothing here to celebrate, unless you happen to own a fossil fuel company," said Randi Spivak, public lands director at the Center for Biological Diversity.

"And this lease sale doesn’t change the fact this administration’s irresponsible leasing practices have led to the majority of lands it puts up for lease either not being bid on or going for the minimum bid, a sure sign of speculation — meaning they are not likely to be developed and are less available to the American people to whom they truly belong," Culver said.

"Outside of the Permian Basin — and one or two other leasing hot spots, such as part of Wyoming — energy dominance is far from a stunning success," Culver added.

The Wilderness Society and other groups are urging the Trump administration to rethink its approach to energy development on public lands. Conservatives for Responsible Stewardship yesterday petitioned the Interior Department to withdraw about 117,000 acres of Western lands that the federal government has unsuccessfully tried to sell to industry (Energywire, Sept. 6).

BLM in the next few weeks has scheduled lease sales across Colorado, New Mexico, Nevada, Utah and other states. Many are being contested because of environmental concerns.

The initial lease sale of land administered by BLM’s Carlsbad Field Office in southeast New Mexico sparked some controversy last spring, as it included 25 parcels within about 10 miles of Carlsbad Caverns National Park and two parcels within a mile of the park.

BLM in late July deferred those parcels in order to review them more closely (Greenwire, July 24).

But the Trump administration has made it a focus to push what it calls "energy dominance" by increasing the production of fossil fuels by eliminating so-called regulatory barriers put into place by the Obama administration.

On that score, the agency has already had some success.

But those numbers pale in comparison to the two-day lease sale this week in New Mexico.

The first day of the lease sale resulted in bids on 71 parcels covering 28,000 acres totaling nearly $386 million, or more than all BLM oil and gas lease sales in 2017 combined.

The first day of the sale also resulted in a national record for the highest bid for a single parcel, and the highest per-acre bid ever placed, Interior said in a press statement.

"The results of this sale show the success that comes with sound energy policy that seeks to use working public lands to ensure reliable energy sources and job growth opportunities," BLM Deputy Director for Policy and Programs Brian Steed said in a statement.

He added, "The administration remains committed to an era of American energy independence through our multiple-use mission that ensures opportunities for commercial, recreational, and conservation activities on healthy and productive public lands."