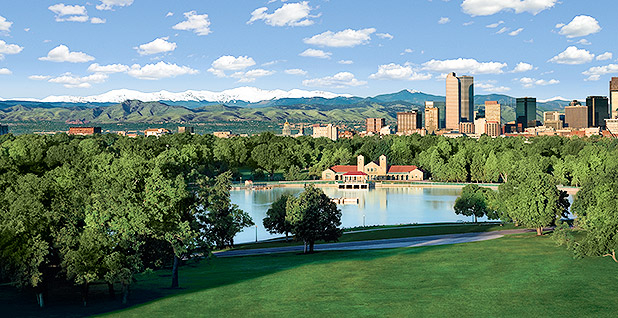 Interior Secretary Ryan Zinke reportedly has said Denver "will probably" become the headquarters for three major agencies within the department as part of an ambitious reorganization effort slated to get underway in fiscal 2019.

The Bureau of Land Management, Fish and Wildlife Service, and the Bureau of Reclamation could eventually move their headquarters operations from Washington to Denver, according to employee notes obtained by E&E News detailing a July meeting between Zinke and U.S. Geological Survey senior executives in Denver.

Zinke provided an overview of his reorganization plans to the senior executives during a July 21 lunch, USGS spokesman Dave Ozman confirmed. It included discussion of the secretary’s desire to shift more department resources and personnel from Washington to field offices across the country and empower front-line employees with more decisionmaking authority.

But more authority might not translate into higher salaries for employees outside the Beltway.

The notes indicated that Zinke believes Interior is too top-heavy with managers. He told senior executives during the Denver meeting that shrinking the workforce would be achieved without layoffs, something he has said publicly before.

"Zinke believes the DOI organization is an upside-down pyramid — there are too many high-graded employees," the notes said. "There needs to be more lower grades, and they need to be in the field. Example, when a GS-14 retires, we should hire a GS-6 or 9."

Zinke has told lawmakers that he wants to reduce the department workforce by 4,000 full-time jobs through a mix of attrition, separation incentives and reassignments to meet the recommendations of the Trump administration’s fiscal 2018 budget request.

The Montanan, a former Navy SEAL, also outlined for career managers his plan to have field offices report to regional joint management areas (JMAs) based on watershed and wildlife corridors. The idea is based on the military’s joint command structure. Leadership at the JMAs "could change or rotate between bureaus in the JMAs," the notes said.

"They are looking to select two to three cities in each of the 13 regions which will compete to be site of the regional/JMA office," the meeting notes said. "Cities have to be no more than two hops from D.C. (by air), affordable and with good community infrastructure."

Birmingham, Ala., and Boise, Idaho, were specifically mentioned as "two good candidates."

Ozman, who contributed to the meeting notes, said they "seemed to be accurate." He emphasized, however, that the information represented "a collection of informal notes that reflect the recollections" of those present at the meeting and are "not precise."

Interior spokeswoman Heather Swift said the department didn’t have "anything to announce on the reorg right now" in response to several questions about issues discussed during the Denver meeting with senior executives. "The secretary plans to release his plan once everything has been finalized," Swift said.

Federal agencies submitted draft reorganization plans to the White House Office of Management and Budget at the end of June as part of a March executive order aimed at improving government efficiency. OMB has said the workforce plans will be made public with the release of the administration’s fiscal 2019 budget proposal, presumably in February 2018.

The Denver notes, which jibe with much of what Zinke has said publicly so far about his reorganization plans, said President Trump and Vice President Mike Pence had approved Zinke’s restructuring proposal centered around JMAs.

Lynn Scarlett, a former Interior Department deputy secretary and chief operating officer who also served as acting Interior secretary during the George W. Bush administration, said leaders must ask themselves what their goals are and what it will cost to achieve them when they undertake large-scale management changes.

"Reorganization is not free," said Scarlett, now global managing director for public policy at the Nature Conservancy. "It comes with political costs, practical costs, human capital costs. So you really have to ask, what is it that you are trying to accomplish, and what are the best ways to accomplish that?"

Interior is a "very complicated department with a great deal of dispersed activity and many authorities," Scarlett said. Of Zinke’s joint management area concept, Scarlett said coordination and collaboration are important, especially in instances where there are "blended missions." Individual agencies, however, also have specialized missions that don’t necessarily overlap with one another but still need to be carried out, she said.

"I’ve seen comments about the desire to reorganize and push people to the field and sort of combine agencies into these joint units," the former Interior official said. "But what I haven’t seen a clear expression of is what’s the management problem one is trying to fix, what are the goals one is trying to achieve?" She added that unless those are clearly articulated and the costs are carefully considered, "you can end up with a lot of effort on something that ultimately is going to have a hard time moving forward."

Interior has roughly 225 or so senior executives across the department.

Democratic Sens. Martin Heinrich and Tom Udall of New Mexico are among the members of Congress who have expressed concern over the reassignments and Interior’s larger reorganization effort. BLM’s New Mexico Director Amy Lueders was among the senior executives transferred in June (Greenwire, June 27).

Just before the Senate left for August recess, Udall and Heinrich told E&E News that the topic of reorganization came up during a late July trip the two took with Zinke in New Mexico, where they toured the Sabinoso Wilderness on horseback.

Udall, who sent a letter to Zinke in June seeking information on how many career senior executives Interior reassigned, why the department relocated them and how much it will cost the government, said he’s still waiting for specific information (Greenwire, July 14). "The devil’s in the details," Udall said.

Agencies have to be as transparent as they possibly can with Congress, Kristine Simmons, vice president for government affairs at the nonprofit Partnership for Public Service, said during a forum last week on agency reform efforts. Panelists at the event hosted by the Center for Organizational Excellence at the National Press Club discussed the executive order and OMB guidance to agencies on restructuring their workforce.

"Congress doesn’t like to be surprised," Simmons said. The legislative branch "likes to be engaged earlier in the process and have some input into designs" rather than receiving a finished product from agencies, she said.

"The more that can be done on the front end to engage and actually develop a working relationship between the branches, that’s going to serve the agencies much better as they are trying to be innovative and do some different things," Simmons added.

Scarlett echoed those sentiments, saying, "Congress is a big player in any federal department organization rethink." Lawmakers care about the fate of federal offices and employees in their districts, as well as mission delivery and the bottom line, she said.

"I can tell you that even small organizational changes of a scale that is wildly more modest than what Secretary Zinke appears to be talking about resulted in a lot of dialogue on the Hill in order to move forward," Scarlett said of her own experience.

Employees — the ones most affected by a reorganization — also are hungry for information. In some cases, however, they might not be aware of what’s coming. Ozman said there "weren’t a lot of questions" at the Denver meeting with senior executives about the reorganization. "I think for a lot of people, maybe this was the first time they’d heard about it," he said.

Simmons spoke generally to E&E News about the need for communication between an organization’s leaders and employees during major restructurings.

"If you look at private-sector data, mergers and acquisitions fail most often because of poor communication; the importance of communication with employees is enormous," Simmons said. Any kind of reorganization is something you should do "with employees, and not to the employees."

Linda Springer, former director of the Office of Personnel Management during the George W. Bush administration who also served as controller at OMB, said during last Wednesday’s National Press Club event that engaging employees during a major agency reform effort is critical.

But she also said OMB and agencies should "take advantage" of the fact that the effort is happening under the radar with fewer outside distractions that can derail such major management initiatives. "I was talking to [OMB] Director [Mick] Mulvaney about this one day, and he said, ‘You won’t see tweets about this,’ and I said, ‘That’s a good thing,’" Springer added.

Springer was asked during the event whether OMB’s decision not to release agencies’ draft plans due in June was a good choice. "I don’t have a lot of insight into that. … I am guessing because it’s part of the [fiscal 2019] budget process, it’s all considered pre-decisional," she said.

‘Department of everything and everywhere’

And Democratic Colorado Gov. John Hickenlooper in March expressed support for relocating BLM headquarters to the West during an event sponsored by the American Petroleum Institute.

"We should go get ’em," Hickenlooper said at the time. "I think there’s too much concentration of decisionmaking in Washington already. Having some of that spread out in other parts of the country is not necessarily a bad idea."

BLM and the Bureau of Reclamation "are largely already weighted to the West," said Scarlett, adding that Interior overall has a significant presence in Denver; Phoenix; Portland, Ore.; and Sacramento, Calif.

Not all the agencies’ responsibilities "lie in the West," Scarlett said.

"It is sort of the department of everything and everywhere in many respects," the former Bush administration official said. "It isn’t by serendipity that there is a main Interior building [in Washington] in which leadership positions across all the agencies exist. They are there because there are some cross-cutting functions where you do want really strong leadership coordination, and frankly also, closeness to the Hill."

Scarlett said that the during the Clinton administration, one of the "perceived challenges" was that the department was in so many places that it needed more people in senior positions in headquarters to better coordinate and bring more consistency to planning processes.

"It may be that there is a perception that that pendulum swung too far and that there would be benefit from some re-examination of opportunities for some different kind of leadership in the field," Scarlett said. "But again, there’s a lot of homework [to do] here."

The shape of Interior’s reorganization, and its success or failure, rest squarely on the secretary and his leadership team. And Zinke has demonstrated that he competes to win, a trait the note takers in Denver homed in on.

"Zinke is very emphatic about being number one. … He made several references to his military experience and playing college football," according to the meeting notes.