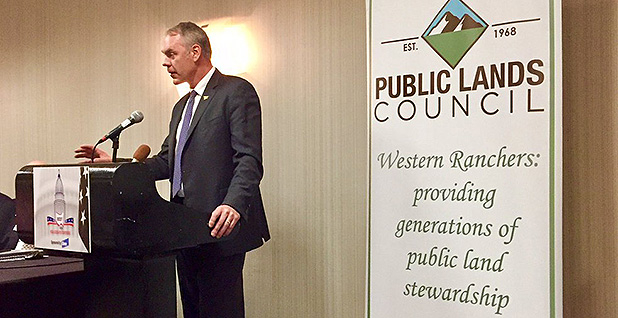 Interior Secretary Ryan Zinke this afternoon offered new details on how he plans to staff and reorganize the agency, how he’ll change the way it manages species and habitats, and how he got picked for the job.

"The president has approved most, if not all," of his picks for key leadership positions, the secretary said during a Q&A session with the grazing permit holders. "You’ll find the leadership will be very pro-Western, to say the least. As soon as the names are announced, I think you’ll like them."

"As a former SEAL commander, we’re too light on the front line and we’re too heavy in Washington and the regions," he said in a brief opening speech.

Zinke also floated the idea of transferring ownership of the National Park Service’s crumbling roads and bridges to the Transportation Department and some Fish and Wildlife Service fisheries to the states in which they are located.

"I may not get the Forest Service, but we’re going to work with the Forest Service and figure out how to not be so stove-piped," the Interior chief said. Zinke indicated that he and Agriculture secretary nominee Sonny Perdue had discussed a "joint command" model like the ones used by the Pentagon to manage personnel across the military services.

"You’ll be happy with the changes that are going to come on sage grouse," he said. "We need to manage on numbers, not on habitat. I’m sure if I gave a state — based on science — a number to strive to taking into consideration predator control, West Nile disease, drought and the myriad of things [that affect sage grouse populations] … the state is very capable of coming up with a plan that attains those numbers."

The secretary’s comments suggest he may seek to roll back changes made to Bureau of Land Management and Forest Service land-use plans that were intended to protect the imperiled bird (Greenwire, Feb. 23).

"I get a call one day from Don Jr. and he says, ‘The president-elect would like to see you,’" Zinke said, referring to Trump’s oldest son. Zinke brought his wife, who was a member of Trump’s National Hispanic Advisory Council, with him to the Trump Tower job interview.

"The subjects ranged from women in combat to a little bit of ag, a lot about military dispositions overseas — Syria policy, China policy," he said. "It was a hundred subjects, and not any subject lasted more than about 30 seconds because he’s a shotgun, inquisitive president. At the end of the conversation, he got up and he says, ‘What about the VA?’ And I said, ‘Sir, you don’t hate me that much.’"

After the interview, "I walked out in the hallway and I said, ‘Well, Lola, what do you think?’ She says, ‘That meeting went great, but I think he was looking at you for Interior.’ I had no idea," Zinke said. "So the next day, I’m flying back to Montana and I get a call from Vice President [Mike] Pence, and he says, ‘Well, congratulations.’ And I asked him, ‘What job?’"