Zinke meets with sportsmen as some ask ‘what happened’ to him 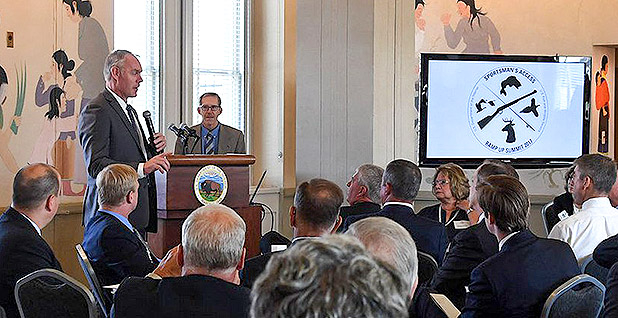 This story was updated at 2 p.m.

Interior Secretary Ryan Zinke met today with sporting groups in a closed-door meeting in Washington, even as a national sportsmen’s organization launched an ad campaign in Zinke’s home state of Montana questioning his ongoing review of national monuments and his overall commitment to public lands.

Zinke, who recently completed a tour of national monument sites in New Mexico and Nevada as part of his look into whether to alter them, hosted the private "Sportsmen’s Summit" with dozens of organizations, including the Congressional Sportsmen’s Foundation, Ducks Unlimited, the National Rifle Association, Safari Club International and the Theodore Roosevelt Conservation Partnership.

A former Republican congressman from Montana, Zinke said today on his Twitter account that the purpose of the summit is to "brainstorm ideas for increased access and collaborative conservation efforts."

Zinke introduced newly sworn-in Deputy Interior Secretary David Bernhardt at the summit, according to Zinke’s Twitter feed. "They’ve known David for a long time & were happy to welcome him back," he wrote.

"Access to our public lands for hunting and fishing is at the heart of Secretary Zinke’s agenda, which is why on day one he signed an order to look into areas to open up access," Interior spokeswoman Heather Swift told E&E news in an email. "Today’s summit brought together more than 30 sportsmen’s organizations and wildlife conservation organizations at the Department to talk about how we can all work together to achieve this mission."

Meanwhile, the ad campaign by Backcountry Hunters & Anglers specifically targets Zinke’s review of 27 national monuments, underscoring growing concerns among some outdoors groups that Zinke has openly courted and that have largely supported the Trump administration.

The campaign takes shots at Zinke and his oft-stated desire to be like Theodore Roosevelt, who was the first president to use the Antiquities Act to designate national monuments, helping to earn him the title the "conservationist president."

The campaign features a 30-second television spot that asks: "What happened to Ryan Zinke?"

The spot features John Sullivan, BHA’s Montana chapter chairman, who opens by saying public lands "are for everyone, whether you hunt, fish, camp or boat. It’s our way of life."

Sullivan then asks, "So what happened to Ryan Zinke?" as the spot features shots of Zinke, including one of the secretary on horseback juxtaposed next to a photo of Roosevelt on horseback.

"He said he’d fight to protect public lands" and work "to be like Theodore Roosevelt," Sullivan says. "But since his Washington promotion, he’s put our public lands at risk. Make no mistake: Zinke’s national monuments review threatens our heritage and thousands of jobs."

He concludes, "Mr. Secretary, don’t turn your back on Roosevelt now."

Swift did not respond to a request to comment on the BHA ad campaign.

The public submitted more than 1.3 million comments to the Interior Department on the ongoing review that could include recommendations from Zinke to shrink or eliminate dozens of monuments (E&E News PM, July 10).

Zinke is expected to submit a final report to President Trump with his recommendations by Aug. 24.

The review has plenty of critics. The Center for Western Priorities launched its own ad campaign yesterday urging Zinke not to recommend any changes to the dozens of national monuments under review (Greenwire, Aug. 1).

The Backcountry Hunters & Anglers ad campaign reflects a growing uneasiness among sporting groups that Zinke may not be the Interior secretary he says he wants to be, Tawney said.

"Secretary Zinke likes to compare himself to Theodore Roosevelt, a visionary sportsman whose conservation achievements are unsurpassed," Tawney said in a statement.

But he added: "Actions speak louder than words, and American hunters and anglers demand leadership from the secretary that upholds — and advances — Roosevelt’s legacy. Our national monuments have stood the test of time, and the present review could trigger a game of political football, leaving some of our most cherished landscapes in limbo."

Tawney said the group is still hopeful, as it views Zinke "as potentially a strong ally of sportsmen and women."

But time is running out, Tawney said.

"Action has yet to be taken," he said, "but we trust he will honor Theodore Roosevelt."