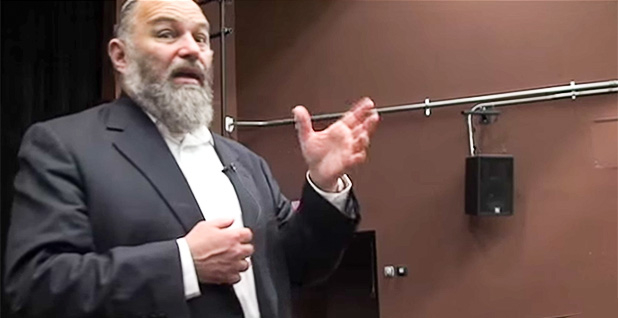 The Sept. 14, 2017, meeting between Zinke and Efraim "Effie" Eitam, a nationalist ex-Israeli member of its parliament, the Knesset, and known for anti-Arab sentiments, appeared on the Interior chief’s public calendar. Eitam leads Afek Oil and Gas, which has drilling operations in the Golan Heights, a disputed territory that the international community has explicitly said does not belong to Israel.

The meeting raises concerns about the appearance that the Trump administration is sanctioning unlawful energy exploration. It comes as President Trump’s pursuit of controversial immigration policies has stoked discontent abroad. Likewise, Trump’s decision to recognize Jerusalem as Israel’s capital has ignited anger in neighboring Muslim nations.

"You have someone who is engaged in action that is illegal and by meeting with [Eitam] it seems to be giving some credibility to what they’re doing," said John Quigley, an international law professor at Ohio State University’s Moritz College of Law.

The meeting with Eitam raised questions for an administration that many believe is hostile to Muslims and antagonizes Israel’s Middle East neighbors.

Eitam said in an interview that Afek’s energy exploration didn’t come up in his meeting with Zinke, who is overseeing a major expansion of oil and gas development on public land. Eitam said "a common friend in Montana" facilitated the meeting and that the conversation was "all personal." He declined to identify the mutual friend or disclose what he and Zinke discussed.

"It was a private meeting, it’s as simple as that," Eitam said. "I cannot provide you any names now because people, I think, would not like me to get their names involved. There’s no story."

Interior spokeswoman Heather Swift declined to answer several questions, including if Afek’s drilling was discussed, who introduced Eitam to the secretary and whether Zinke was aware that the firm’s operations run afoul of international law and U.S. foreign policy.

The United States does not recognize Israel’s claim to the Golan. That position "has not changed," said Noel Clay, a State Department official, in an email. Israel maintains that it annexed the Golan Heights in 1981, after capturing it during the Six-Day War in 1967.

Eitam is a controversial figure. He has called Israeli Arabs a "cancer." Of Palestinians, he said, "we will have to kill them all." He clarified that assertion by saying he wasn’t referring to all Palestinians, just "the ones with evil in their heads."

The Golan, where Eitam lives, is one of them. While Syria contends that the area is theirs, the Israeli Supreme Court considers it Israeli territory, said Robbie Sabel, the former deputy legal adviser for Israel’s Ministry of Foreign Affairs. That’s why Israel granted Afek exploration licenses. The company has drilled in five of 10 permitted sites since beginning its search for resources in February 2015.

Sabel said the action flouts U.S. and international policy. While the United States has previously allowed Israel to produce from existing wells in territories such as Egypt’s Sinai Peninsula, it forbids new extraction.

The shift to natural gas has been a key part of Israel’s strategy to reduce carbon emissions, bolstering energy security and promoting economic development.

"As Israel’s energy minister, I declare my commitment to reducing the use of polluting coal and replacing it with natural gas has not changed, regardless of the decision of the U.S. president," Energy Minister Yuval Steinitz said in a statement prior to Trump announcing his intent to withdraw the United States from the Paris climate accord.

Whether Afek’s action would provoke criticism from the United States or the international community is questionable, Sabel said. If the company was drilling in the West Bank, that could happen. But given the political turmoil in Syria, ravaged by a yearslong civil war, few nations would likely be willing to defend its claim to the region.