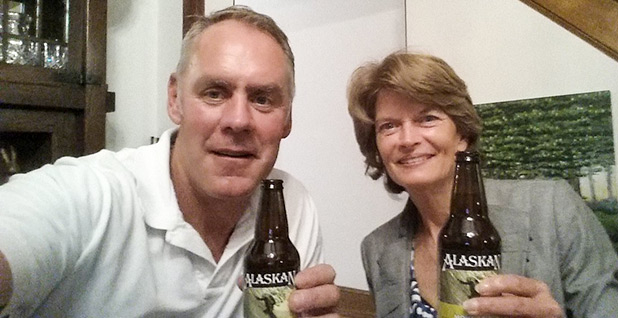 Zinke, who hosted the senator last night at his private residence, is shown holding an Alaskan Brewing Co. IPA, with a cowboy hat hanging on a cabinet in the background.

"I say dinner, she says brews. My friends know me well. Thanks @lisamurkowski #Alaska #IPA #MadeInAmerica," the secretary tweeted.

The tweet drew a chuckle from environmental groups and commenters, with Aaron Weiss, a spokesman for the Center for Western Priorities, writing, "Decided you need your nominees confirmed after all?"

The Senate Energy and Natural Resources Committee, which Murkowski chairs, vets Interior Department nominees and is set to hear testimony from Joseph Balash on his nomination to be assistant Interior secretary for land and minerals management on Sept. 7 (E&E Daily, Aug. 3).

The dinner took place after a week of political turmoil on Capitol Hill surrounding a failed attempt at health care reform in which President Trump — and then Zinke — called Murkowski about a critical vote that helped sink the measure (Greenwire, July 27).

Murkowski has yet to discuss the details of her call with Zinke but has characterized her discussion with Trump as "hard." Alaska Republican Sen. Dan Sullivan was more candid, telling reporters that Zinke told him Murkowski’s vote could threaten energy development on federal land in the Last Frontier State.

Some experts have suggested Zinke’s call has already raised the bar for keeping politics out of agency decisions, a situation that could trigger lawsuits and gum up Interior matters.

Escaping the media spotlight earlier this week, Murkowski retreated to Alaska to spend time salmon fishing with family and friends on an island off the state’s southeast coast (E&E Daily, Aug. 2).

"They talk and meet often in both a professional and friendly capacity," she said in an email.