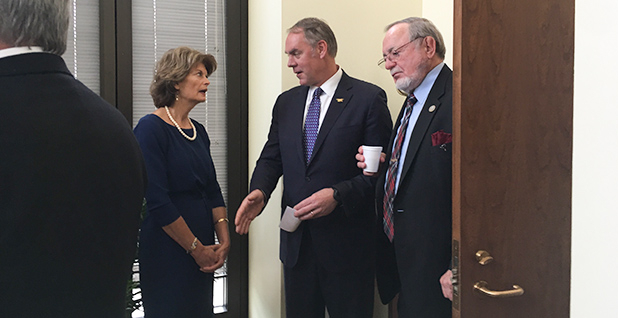 Sen. Lisa Murkowski (R-Alaska) talks with Interior Secretary Ryan Zinke and Rep. Don Young (R-Alaska) this morning during a signing ceremony on a land deal that would pave the way for a long-contested road to be built in the Izembek National Wildlife Refuge in Alaska. Pamela King/E&E News

Interior Secretary Ryan Zinke today paved the way toward construction of a controversial Alaskan road through a national wildlife refuge intended to serve the remote but politically renowned community of King Cove.

In a signing ceremony held at the otherwise short-handed Interior Department headquarters, followed by a gathering on Capitol Hill, Zinke and his Alaskan allies celebrated the formal acceptance of a decades-in-the-making land swap needed for the road’s construction.

"We’ve been waiting 35 years, and have spent over $50 million," Zinke said at Interior headquarters this morning. "I guess we can get it done."

The move drew immediate criticism from environmental groups, which have said they plan to sue over the approval.

Flanked by Alaska’s three-member Republican congressional delegation and the state’s governor, who together held up the Alaskan flag, Zinke signed the measure authorizing conveyance to the King Cove Corp. of what he said would be "up to 500 acres" of federal land.

In exchange, the Interior Department will receive land of equal value owned elsewhere by the tribal corporation. The department said the agreement "begins a process between Interior and the King Cove Native Corp. of identifying land of equal value needed for a single lane, restricted-access road."

The deal will allow construction of an approximately 12-mile gravel road through the Izembek National Wildlife Refuge, which King Cove residents say is needed for safe, year-round access to medical care (Greenwire, Jan. 19).

The approximately 1,000 residents of King Cove currently must either fly or take a boat to reach an all-weather airport in nearby Cold Bay, from where they can be transported to hospitals in far-away Anchorage.

"I never thought this day would come," Alaska Gov. Bill Walker (I) said, as he repeatedly praised the "never-give-up attitude of King Cove."

Underscoring the long wait, Alaska Republican Sen. Lisa Murkowski noted that she inherited the King Cove road land swap as a top priority when she was first appointed to the Senate in 2002. The state’s lone House member, Republican Rep. Don Young, has been pressing for the road even longer.

"Everybody knows the importance of it," Young said of the road, noting that it took "30-some-odd years" for the final deal to be struck.

Alaska residents likewise applauded the signing ceremony at Interior headquarters, which was livestreamed on Zinke’s official Facebook page. The lawmakers and Alaska residents then gathered in the Hart Senate Office Building for a congratulatory session.

During the Obama administration, then-Interior Secretary Sally Jewell rejected the land exchange in 2013 because she said it would split valuable wetlands and undermine a designated wilderness area.

When Jewell rejected the Izembek road, Murkowski and her staff were told to "just give up," the Alaska senator told reporters gathered in her office this morning.

Murkowski wrote on the first page of a binder that she said she carries around everywhere: "I need to move past the Izembek thing and get over it."

She ripped the paper out of her binder during today’s press conference, which Murkowski said had to be kept short because she and her colleagues had to get to work on reopening the government. The briefing ended about an hour before the Senate was scheduled to vote on a continuing spending resolution to fund the government through Feb. 8.

Zinke said the signing is an indication that "local voices matter" to the federal government. He used the same phrase when he announced on Twitter that he would exempt Florida from the Bureau of Ocean Energy Management’s five-year offshore drilling plan.

Zinke later fielded criticism from leaders in other states opposed to drilling off their coasts. They questioned whether the secretary was listening to only some local voices.

The entire road connecting King Cove and Cold Bay will be about 20 miles, although only some of it will cross the refuge. The entire refuge spans about 315,000 acres.

Environmentalists have already questioned Zinke’s administrative authority to greenlight the land swap, and have warned they could challenge the land swap in court (Greenwire, Jan. 8). They have long argued that a road through the refuge would threaten 98 percent of Pacific black brants and nearly all the world’s emperor geese, which depend on Izembek’s eelgrass beds.

"This appalling move by the Trump administration is the result of a backroom deal that kept the public completely in the dark and ignores the Interior Department’s science-based conclusions against the road," Nicole Whittington-Evans, the Wilderness Society’s Alaska regional director, said in a statement earlier this month.

Randi Spivak, public lands program director for the Center for Biological Diversity, added today that "the Trump administration did an end run around Congress because lawmakers wouldn’t approve this horribly destructive land swap."

Even before lawsuits start flying, some additional delays stand in the way of road construction, as Zinke noted the land swap cannot be implemented until Congress agrees on a funding bill that reopens the entirety of the federal government.