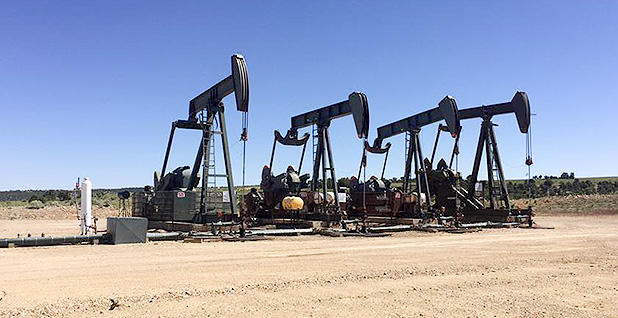 Interior Secretary Ryan Zinke announced today that he will sign an order directing his agency to follow its mandate of holding quarterly lease sales, in an effort to boost fossil fuel extraction on federal lands.

The decision is the latest in a series of orders aimed at increasing oil and gas production on federal lands, or, in the parlance of the Trump administration, establishing "energy dominance" (Climatewire, June 13).

The secretarial order will also direct Interior officials to issue new permits within only 30 days, rather than the 257-day average it achieved last year.

"The amount of bureaucracy the federal government has put into place has provided some uncertainty," Zinke said. He added, "We’re going to be a fair and prudent partner, but we’re not going to be an adversary to creating wealth and opportunity on public lands."

Zinke acknowledged that Interior officials must still determine how to do reduce the agency’s permitting timeline to the shorter 30-day window.

"It’s not just putting more people or money into the permitting process," Zinke said. "It’s also looking at how we do permits."

He added: "We have really smart people. We just want to make sure the process reflects today’s environment rather than last century’s."

Zinke later said that the agency would not be able to immediately reduce its review period and said that he could ask Congress to review that mandate. Currently, once an application for permit to drill is approved and all National Environmental Policy Act requirements are met, the agency has 30 days to approve or deny a permit.

"We’re not ready to meet the 30-day marker. I think we have to look at our system more closely," Zinke said. He also noted: "This is not going to be done overnight, because what we don’t want is unintended consequences."

Zinke said his secretarial order "directs BLM to follow the law,", noting that 11 lease sales were canceled in 2016. "A lot of these areas that are available for leasing are known reserves. The geology is pretty well advanced. There are wells within the area. … When you have to look at the process that views a new well as if a well has never been drilled before in an existing basin, that’s been part of the problem."

He added, "We’re looking at all permits, but we want to do it fairly. The president’s guidance has been, make sure that we’re energy independent and energy dominant."

The order comes on the heels of President Trump’s "energy week" last week, during which he touted actions that would increase domestic energy development (Climatewire, June 30).

Those actions include Trump’s executive order issued in late April, in which he vowed to open the U.S. outer continental shelf in the Atlantic to Pacific oceans as well as areas in the Arctic Ocean to energy extraction.

That order has prompted the Interior Department to rewrite the five-year plan that governs which areas of the outer continental shelf can be leased for offshore oil and gas development.