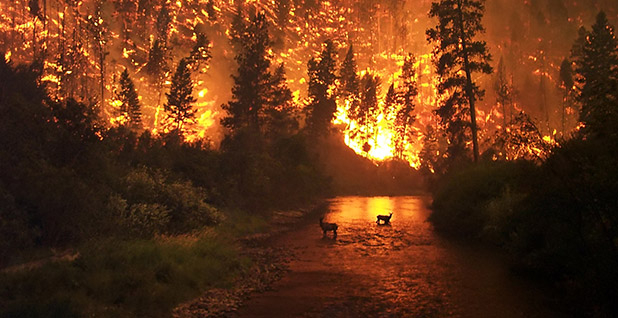 With Western wildfires raging, Interior Secretary Ryan Zinke yesterday directed federal land managers to "think about fire in a new and aggressive way," and said agencies and bureaus should focus on speeding the thinning of dead trees and other forest fuel.

In a memo to Interior leaders and managers, Zinke outlined plans to focus on fuel management of trees and vegetation, as well as maintenance of fire roads and the "defensible area" around federally owned structures.

"Even as fires continue to burn, I ask that you think about a different way of managing public lands to better incorporate fuels management into your resource-management planning," Zinke wrote in the memorandum.

In a statement issued with the memorandum’s release, he added: "This Administration will take a serious turn from the past and will proactively work to prevent forest fires through aggressive and scientific fuels reduction management to save lives, homes, and wildlife habitat."

Fires have burned more than 8.1 million acres nationwide so far this year, according to the National Interagency Fire Center.

Although that is not a record, it is far more than the 4.7 million acres burned through the same period last year. Sixty-two large fires are currently burning over 1.6 million acres, according to the Boise-based fire center. Zinke’s home state of Montana accounts for 20 of the large fires, more than any other state.

Zinke did not indicate he will seek additional funding to focus on fuel management, although his directive suggested that federal agencies could hire private industry to clear trees and vegetation.

"Where dead and dying trees have become hazards that can carry fire across our boundaries or into areas that are a threat to values-at-risk, we must move aggressively to minimize that threat," Zinke wrote. "If we don’t have the people on hand, we have authorities to contract it to capable resource managers in the private sector. It makes little sense to be thinning to protect structures when we see flames on the ridge and smoke in the air — fuel management is more effective when undertaken before fires break out."

"If we don’t start managing our forests, the forests are going to start managing us," Daines said. "The fires burning across Montana are a catastrophe, and we need all available resources to combat this threat. I applaud Secretary Zinke’s action to focus resources on attacking wildfires."

"Step one in any serious plan to address wildfire is to admit climate change is not a hoax created by the Chinese," Grijalva said, referring to past statements made by President Trump. "It’s a fundamental change in our planet that has to be taken seriously. Since the Trump administration is stocked with climate change deniers, including at the very top, no wildfire plan they concoct is worth the paper it’s printed on."

"Given the secretary’s fear of uttering [the] words ‘climate change,’ this looks like another Zinke special," Pedery said. "The memo sounds dramatic and throws in a lot of big words, but all it really does is ignore science and promote more exploitation and abuse of America’s public lands by his political cronies."

Earlier this year, Republican Sen. John Thune of South Dakota introduced a bill that would expand exemptions for federal forest managers from having to prepare detailed environmental analyses before conducting certain activities involving up to 10,000 acres. The current categorical exemption limit goes up to 3,000 acres.

Thune’s "Forest Management Improvement Act" (S. 1731) does not yet have any co-sponsors.

A similar expansion of forest-related exemption from National Environmental Policy Act review requirements was included in a House bill approved last June by the House Natural Resources Committee on a 23-12 vote (Greenwire, June 27).