Zinke, Perry on Hill this week as spending talks advance 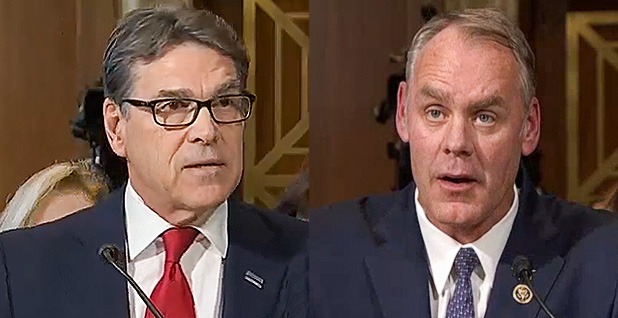 Energy Secretary Rick Perry and Interior Secretary Ryan Zinke are due on Capitol Hill this week to defend their fiscal 2018 budget request as House Republicans scramble to set in motion a plan to pass a spending package before summer recess.

GOP leaders have been eyeing packaging all 12 annual spending bills in a single omnibus before the five-week break. That would allow the House to focus on tax reform in the fall and strengthen its hand in final spending talks with the Senate.

But lawmakers first will need to adopt a budget — or a substitute deal — to set domestic and defense discretionary spending levels. Without an accord, it would be much harder to move the omnibus.

"You can’t have the cart get before the horse, you have to have the [budget] number," Rep. Jim Jordan (R-Ohio) said.

Negotiations have gone on for weeks in the House, but the Budget Committee has yet to schedule a markup — something usually done in April or May. The administration’s delay in delivering its spending plan affected the panel’s planning.

Rep. Ken Calvert (R-Calif.), chairman of the House Interior and Environment Appropriations Subcommittee, said last week the GOP is grappling with how to deal with strict budget caps set by the 2015 budget deal.

Calvert suggested there is broad support within the party for increasing defense spending, but he says doing so by cutting domestic accounts — as some conservatives want — would be "untenable."

If Congress does not raise the budget caps, overall discretionary spending would be cut by about $5 billion next year, according to the 2015 deal.

The House Appropriations Committee already signaled its interest in going beyond those caps by approving a fiscal 2018 military construction and veterans affairs spending bill that includes $6 billion more than last year’s figure. That bipartisan bill is the first — and so far only — spending measure to surface this year.

House conservatives, particularly members of the hard-right Freedom Caucus, are among those pressing for deep cuts in mandatory spending programs, like welfare, in exchange for any domestic boost in 2018.

Those conservatives likely have the votes to block any fiscal 2018 spending bills if they do not win funding reductions.

Rep. Tom Cole (R-Okla.), a member of the Interior and Environment Appropriations Subcommittee, said the House would need a budget or spending framework this month to make its plans work.

But Democrats in both the House and Senate are already worried about the impact of delays in adopting a budget.

"Until you have a budget resolution, until you know what the allocation of the overall discretionary dollars are, you have no idea frankly what the ramifications of $6 billion extra" for military construction and veterans affairs are, said House Minority Whip Steny Hoyer (D-Md.) last week.

Hoyer warned that appropriators could slash programs in upcoming spending bills to make up the difference. "You give more to one, you’ve got to take more from another," he noted.

Democrats in the Senate have the same concerns.

"We are way late in this process, we are running fast into a September deadline, [and] putting ourselves in jeopardy with Trump already saying he wants to shut down government."

In early May, just after the government averted a shutdown, President Trump tweeted that the country could use a "good shutdown" in September, when the current fiscal year ends.

While there’s talk of the House putting an omnibus spending bill on the floor before the August recess, Sen. Tom Udall (D-N.M.), ranking member of the Interior and Environment Appropriations Subcommittee, said he hasn’t yet heard of a similar plan for the Senate.

"I think our plan right now is to either have individual appropriations bills or small minibuses at this point," he said.

Zinke, who will be defending his agency’s $11.7 billion fiscal 2018 budget request, will likely receive a friendly reception from lawmakers, despite expected pushback from Democrats and Republicans on proposed cuts to popular programs, including the Land and Water Conservation Fund and payments in lieu of taxes (E&E Daily, May 26).

Questions about the administration’s preference for more energy development over new federal land acquisition are a safe bet.

Democrats, including Cantwell and Rep. Raúl Grijalva of Arizona — ranking members of the Natural Resources panels in the Senate and House — will likely seize on Zinke’s recent secretarial order directing a review of sage grouse policies, as well as his review of 27 national monuments.

Another flashpoint: the Bureau of Land Management’s announcement last week that oil and gas companies don’t have to comply with the Obama-era rule on methane venting, flaring and leaking on public and tribal lands, pending judicial review (Greenwire, June 14).

Senate Energy and Natural Resources Chairwoman Lisa Murkowski (R-Alaska) will no doubt ask Zinke about the department’s proposal to open up a portion of the Arctic National Wildlife Refuge in Alaska to drilling, a route she has long championed.

On the other side of the Capitol, House Natural Resources Chairman Rob Bishop (R-Utah) will likely seek answers on how Congress can work with the executive branch to reform the 1906 Antiquities Act and shrink Bears Ears.

The Alaska Wilderness League will hold a media conference today, ahead of the budget hearings, to oppose drilling in ANWR (E&E Daily, May 24).

Energy Secretary Perry, who will be defending his agency’s $28 billion budget request, is facing questions over proposed cuts, like scrapping the Advanced Research Projects Agency-Energy and slashing the Office of Energy Efficiency and Renewable Energy by 70 percent, from $2.1 billion to $636 million.

Supporters of the president’s plan say the Department of Energy has shifted too far away from its core mission and needs rebalance. In budget documents, the administration said, "The private sector is better positioned to finance disruptive energy research."

But critics say independent analyses, such as one this month from the National Academies of Sciences, Engineering and Medicine on ARPA-E, show DOE funding plays a unique and needed role.

Lawmakers also are likely to press Perry on how the administration’s stated goals — such as support for the national laboratories and coal technology — mesh with the budget proposal.

Also likely to come up is the administration’s plan to eliminate the mixed oxide fuel fabrication facility in South Carolina, a program with GOP backing (E&E Daily, May 24).

One of the project’s most vocal supporters, Sen. Lindsey Graham (R-S.C.), sits on the Senate Energy and Water Development Appropriations Subcommittee, which is hosting Perry this week.

The Energy chief might also face questions about nuclear waste, mainly the agency’s proposed $120 million to work on resuming the licensing process for the controversial Yucca Mountain repository in Nevada.

Schedule: The House Energy and Water Development Appropriations Subcommittee hearing on the Energy budget is Tuesday, June 20, at 1 p.m. in 2359 Rayburn.

Schedule: The Senate Energy and Natural Resources Committee hearing on the Interior budget is Tuesday, June 20, at 10 a.m. in 366 Dirksen.

Schedule: The House Financial Services and General Government Appropriations Subcommittee hearing on Office of Management and Budget spending is Wednesday, June 21, at 2 p.m. in 2359 Rayburn.

Schedule: The Senate Interior and Environment Appropriations Subcommittee hearing on the Interior budget is Wednesday, June 21, at 9:30 a.m. in 124 Dirksen.

Schedule: The Senate Defense Appropriations Subcommittee hearing on the Air Force budget is Wednesday, June 21, at 10:30 a.m. in 192 Dirksen.

Schedule: The Senate Energy and Water Development Appropriations Subcommittee hearing on the Energy budget is Wednesday, June 21, at 2:30 p.m. in 138 Dirksen.

Schedule: The House Natural Resources Committee hearing on the Interior budget is Thursday, June 22, at 9:30 a.m. in 1324 Longworth.

Schedule: The Senate Energy and Natural Resources Committee hearing on the Energy budget is Thursday, June 22, at 10 a.m. in 366 Dirksen.