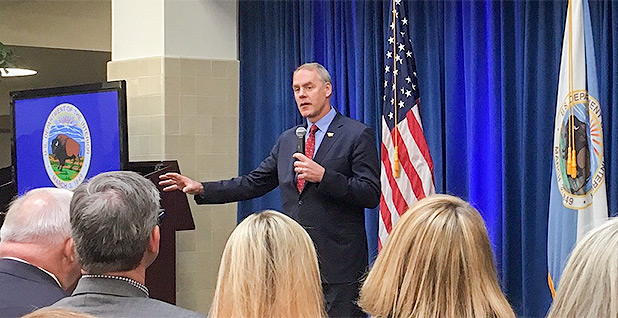 "You might hear some rumors about reorganization. They’re true," he said, prompting nervous laughter to ripple across the basement cafeteria of the agency’s headquarters.

"The last time the Department of the Interior had been organized was about 100 years ago," Zinke said. "So the reorganization is going to be bold and look at, just as Teddy Roosevelt did, look out 100 years from now and make sure that we’re organized to address the challenges of the future. And I need all your help."

The secretary, in his second full day on the job, noted that past efforts to rethink how the sprawling agency operates had focused on consolidation and removing resources from front-line employees.

"That’s not the reorganization that we’re going to do," he promised. "We’re going to reorganize to address the challenges we see coming. And there are a lot of challenges."

Zinke encouraged employees in the standing-room-only cafeteria and those viewing his unscripted speech remotely to "think about what the Department of the Interior should look like a hundred years from now."

During his confirmation process, Zinke expressed openness to adding the Forest Service, which is currently part of the Agriculture Department, to Interior (E&E Daily, Feb. 1).

One immediate change the secretary announced, to boisterous cheers from the D.C. staff: "We’re going to make the building dog friendly," he said. Both his wife, Lolita, and dog, Ragnar, attended his talk.

Other applause lines in his brief speech to employees included a vow to not sell or transfer federal lands and to push back against a 10 percent budget cut that the White House is demanding (Greenwire, Feb. 28).

"I looked at the budget," he said. "I’m not happy. But we’re going to fight about it, and I think I’m going to win at the end of the day."

Zinke also expanded upon the top three priorities he had laid out to employees in an email yesterday: to reduce the National Park Service backlog, increase employee morale and authority, and promote American Indian sovereignty (Greenwire, March 2).

"We’re behind in infrastructure," he said. "I’m going to ask the president for the whole enchilada to make sure that we focus on rebuilding our parks and make sure that our refuges out there have what we need."

National parks and wildlife refuges, the secretary noted, are often the most visible way in which the public interacts with the agency.

Speaking about his general take on land management issues, Zinke said, "The one-size-fits-all [approach] often fits no one. So we’re going to work very hard at being the Department of Yep."

After asking everyone to rededicate to themselves to their jobs — from the front door guards to the cafeteria workers — Zinke declared that "the expectation of the Department of the Interior is pretty simple: We are going to be the best department in the government."

When the speech ended, Zinke greeted a long line of employees and then spoke with reporters. He offered few details about his reorganization plans.

"I think we’re too short on the front lines," he said. "Looking at employee surveys within the department, the further you go out, the sadness meter tends to go up."

Zinke didn’t talk about adding more managers or rangers, which would be a challenge under the Trump administration’s federal employee hiring freeze. Instead, the secretary said he would make sure local officials "have the right authorities."

In response to reporters’ questions, the secretary also made clear that he intends to reopen the offshore oil and gas leasing plan.

"I’m going to review anything that didn’t go through Congress," he said. "The last-minute policies, the last-minute decisions, tell me that it was not vetted or didn’t have a consensus."

Zinke also offered hints about how he would approach the coal program.

"We’re going to look at everything across the board," he said. "On leasing, a concern I’ve had is … when a company offers a lease, it’s been low because there is no probability that actually you can do with that lease what’s intended with it. So, we have to look at when we offer a lease, rather than selling a junk bond, we need to look at maybe selling a double-A bond and … make sure the reclamation process is in there so when a company values that lease, we think the taxpayer should get more value on that."

Zinke added that the department would be "looking at a new way at doing the leasing appropriately" but cautioned that "it will take awhile to flesh it true."