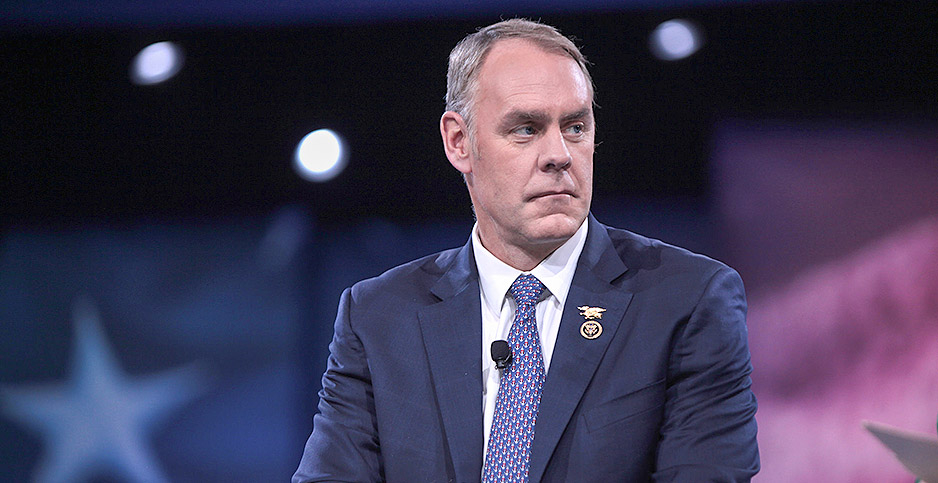 Interior Secretary Ryan Zinke has redrawn his ambitious plan for reorganizing the Interior Department after the agency received numerous complaints from Western leaders and members of Congress that splitting up states into multiple regions would cause more harm than good.

Facing pushback from governors of both parties — who objected to not being consulted on maps released last month proposing to divide management of millions of federal acres into 13 regions along boundaries of watersheds and basins — Zinke is now proposing to largely follow state lines more closely in setting up new management territories.

The new map still divides Interior into 13 regions but avoids splitting up states like Colorado, Wyoming and Utah into multiple regions, as proposed in a map released last month during a two-day meeting in Washington with about 150 Interior senior executives (Greenwire, Jan. 10).

Western governors, in particular, were concerned that the reorganization outlined in the earlier map would make it complicated for states to work with the Bureau of Land Management — the federal government’s largest landowner, managing nearly 245 million acres. BLM currently divides management of federal lands in its jurisdictions, with few exceptions, along state lines.

A prime example was Colorado, which according to the January map would have been broken into three regions. Governors in the West have traditionally supported a single BLM state office, with one state director with whom their staff can coordinate on issues or problems.

Colorado is now proposed to be part of a region called the "Upper Colorado Basin," which appears to include all of Wyoming, Utah and New Mexico.

"The new maps represent the feedback [Zinke] solicited from veteran officials at Interior, Congress and States and they are the latest draft for discussion," Heather Swift, an Interior spokeswoman, said today in an emailed statement to E&E News.

The Western Governors’ Association this month sent a letter to Zinke expressing "regret that DOI did not seek input from western states on the impact of this proposal" (E&E News PM, Feb. 2).

"Six of the seven land-based DOI bureaus currently have state or regional offices with boundaries along state lines," the governors wrote. "Why has DOI deviated from the use of state boundaries in this proposal?"

Members of Congress from both parties have expressed reservations about the reorganization.

Democratic Reps. Raúl Grijalva of Arizona and Donald McEachin of Virginia asked Zinke this month to halt it until he provides Congress with more details (Greenwire, Feb. 14).

John Tanner, director of Interior’s Office of Congressional and Legislative Affairs, sent an email to members of Congress today explaining the reasoning for adjusting the reorganization maps.

"Earlier this year DOI released a map that proposed dividing the country into 13 regions that would be delineated using natural features such as watersheds and ecosystems. As this proposed change would be a major shift in the organization of DOI we asked for feedback from our Senior Executive Staff, Members of Congress, Governors, and other partners and friends," Tanner wrote.

"We have heard you, and have incorporated your feedback."

The new map appears to follow state lines more closely, and the regions have been renamed to highlight states.

For example, the new map establishes an "Arkansas-Rio Grande-Texas Gulf" region that includes all of Texas and Oklahoma.

The area in the January map was part of a proposed South Central region, which included all of Texas and Oklahoma, but also the northwest corner of Louisiana and sections of Arkansas, Kansas and Missouri, as well as the southeast corner of Colorado and the eastern two-thirds of New Mexico.

California, however, under the new plan is divided into the "California Great Basin" region and the "Lower Colorado Basin," which includes the southern quarter of the state and Nevada and Arizona to the east.

"Western Governors are gratified that the Department of Interior has responded to their previously-stated concerns and are moving towards a state boundary-oriented approach in the latest draft map of its unified regional boundaries," Jim Ogsbury, executive director of the Western Governors’ Association, said in a statement.

Zinke has stated publicly that he wants to reorganize the department to make it more efficient, and he has testified before Congress that he wants to reduce the department’s workforce by 4,000 full-time jobs. He has also floated the idea of moving some agency headquarters, such as that of BLM, out of Washington to Denver or another site in the West, where the vast majority of federally managed lands are located.

"The governors support the Department’s goal of operating more efficiently and effectively by moving more decision making to the field and share their goal of improving coordination among federal, state and local agencies," Ogsbury said in his statement. "We look forward to additional conversations with the Department on how to further refine the plan."

He said Zinke started reaching out to Western governors earlier this week, saying he was open to meeting with the governors to discuss details of the reorganization.

Zinke is scheduled to attend a WGA breakfast on Sunday in Washington, D.C., during which he will meet with individual governors, sources said.

"A number of local stakeholders expressed concerns and highlighted the importance of state boundaries in the reorganization proposal. Both Chairman Bishop and Secretary Zinke view state and local input as central to informing the department’s actions and polices," Scholettler told E&E News. "We applaud Secretary Zinke for actually listening to the public and adjusting plans based on feedback, a clear departure from the previous administration. Chairman Bishop is eager to continue working with the department as they further develop their plans for reorganization."

But Grijalva, the top Democrat on the Natural Resources panel, criticized the new map, asserting it continues to favor natural resource extraction over other uses of public lands.

"Secretary Zinke’s new map shows the same industry-friendly disregard for the Interior Department as his last failed proposal," Grijalva said. "He and his political team want Big Oil to decide the department’s future because they don’t respect its mission. Agency reorganizations are useful only if they’re managed by competent professionals with a healthy respect for science. Unfortunately, that’s not what we have with this administration."

Zinke previously revealed his intention to solicit gubernatorial feedback during a briefing on the department’s proposed $11.7 billion budget for fiscal 2019. The budget proposal includes $17.5 million devoted to the ambitious reorganization effort.

"At the budget hearings, we’ll be able to talk in more detail, based on the states’ comments," Zinke said earlier this month.

Drawing on his prior military experience with unified combatant commands, Zinke has proposed adopting a similar concept for Interior’s multiple agencies. Currently, officials note, Interior’s bureaus have more than 40 distinct regions, each with its own geographic boundaries.

Zinke said officials relied on maps compiled by the U.S. Geological Survey that use watersheds, wildlife corridors and other elements to "come up with 13 unified regions."

But altering Interior jurisdictional boundaries, particularly BLM’s, has been controversial in the past.

A move by the Obama administration’s BLM nearly three years ago to merge the agency’s New Mexico and Arizona state offices had to be abandoned after a firestorm of complaints from bipartisan lawmakers.