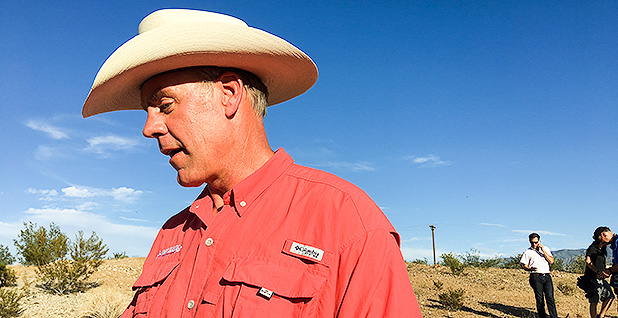 BUNKERVILLE, Nev. — Interior Secretary Ryan Zinke yesterday dismissed as "laughable" questions about his recent well-publicized phone calls to Alaska’s senators and rejected characterizations of his calls as a "threat" to Sen. Lisa Murkowski (R) over her vote against proceeding with health care debate.

Zinke addressed the phone calls during a press conference here marking the end of his daylong tour of both the Gold Butte and Basin and Range national monuments.

Alaska Sen. Dan Sullivan (R) first revealed Zinke’s phone call over the health care issue in an interview with the Alaska Dispatch News last week, asserting that Zinke had said Murkowski’s opposition to the health care debate could have ramifications for the state’s energy industry.

"I’m not going to go into the details, but I fear that the strong economic growth, pro-energy, pro-mining, pro-jobs and personnel from Alaska who are part of those policies are going to stop," Sullivan said Thursday (Greenwire, July 27).

Murkowski declined to discuss the details of her own call with Zinke but told E&E News last week: "I don’t want to go into the contents of a personal call, but it was a difficult call, let’s just say."

Asked yesterday to recount his conversation with the senators, Zinke said: "I talk to Sen. Murkowski and Sen. Sullivan all the time."

As a reporter attempted to clarify, Zinke continued: "A lot’s been said about a lot of things. But I talk to them all the time. We get along well."

Asked whether he had issued threats to the senators, Zinke said: "The moon has been characterized as a threat, too, so I think it’s laughable."

House Natural Resources Chairman Rob Bishop (R-Utah) said last week he was not familiar with the calls but suggested that such pressure from the executive branch is "not unprecedented."

Nonetheless, Reps. Frank Pallone of New Jersey and Raúl Grijalva of Arizona, the top Democrats on the Energy and Commerce and Natural Resources committees, last week asked both the Government Accountability Office and the Interior Department’s inspector general to review whether the telephone calls violate any legal or ethical standards, including the the Anti-Lobbying Act and Antideficiency Act (E&E Daily, July 28).