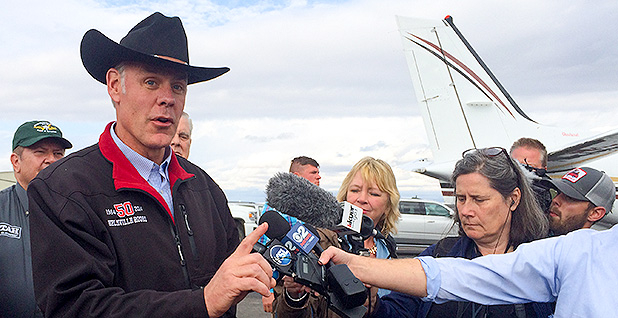 KANAB, Utah — Interior Secretary Ryan Zinke yesterday declared he "shook hands with all sides" during a four-day tour of the Beehive State’s national monuments — even as dozens of protesters could be heard chanting "Talk to us!" behind a chain-link fence a few hundred yards away.

As he prepares to make recommendations to President Trump on whether to revoke or reduce 27 national monuments, Zinke spent four days touring both the Bears Ears and Grand Staircase-Escalante sites. Critics say he gave preference during his visit to opponents of the monuments.

"These two are the most controversial; I think everyone recognizes that. There’s a lot of monuments that are frankly settled and not controversial at all," Zinke said in his fourth news conference during the trip, held on the runway of the Kanab Municipal Airport.

He added that he will aim not to upset settled policy at any of the sites: "My intention is not to rip off a Band-Aid if it’s healed in there."

But advocates of maintaining the Utah monuments, including members of the Escalante and Boulder Chamber of Commerce as well as the Bears Ears Inter-Tribal Coalition, have criticized Zinke for what they view as an unbalanced visit to the state that favored opponents of the monuments like Gov. Gary Herbert (R) and House Natural Resources Chairman Rob Bishop (R). Zinke also did not hold a public forum during his trip.

Asked to address those concerns, however, Zinke dismissed assertions that he refused to meet with the local Chamber of Commerce officials and pointed instead to the robust list of elected officials, largely Republicans in the solidly red state, he spent time with this week.

"I didn’t reject the meeting," Zinke said of the Escalante and Boulder Chamber of Commerce. "I met with these gentlemen, [who] are the county commissioners. I met with business folks."

In addition, he referred to his meetings, both in Washington, D.C., and Utah, with the state’s all-GOP congressional delegation, Herbert, state legislators, county commissioners, the Nature Conservancy, Friends of Cedar Mesa, the Bears Ears Inter-Tribal Coalition, Bureau of Land Management officials and Navajo tribes in Utah that oppose the monument.

"I’ve met with hundreds of people, shook hands with all sides," Zinke said. "If I missed one group, that’s the breaks."

In an interview with E&E News, Zinke also noted that he stopped to speak with "folks alongside the road" during his visit and asserted that he prefers to think of the protesters who greeted him in Salt Lake City, Blanding and Kanab as "advocates."

"We have done more than any other administration reaching out to everybody," he said. He repeatedly emphasized Interior’s decision to issue a request for public comment on the Regulations.gov website, as well.

He later added: "I’ve toured millions of acres on foot, rode horses, flew over it multiple times. I’ve done that all in a few days. I have certainly fulfilled my duty and my mission."

During his news conference, Zinke said he would refrain from determining any potential changes to either Utah monument before the public comment period has closed.

"I think it’s time to assess," he said. "I’m not going to make any decision on it until we review the public process."

Following his visit to the Grand Staircase-Escalante monument yesterday, Zinke also acknowledged the potential for opening access to the massive coal deposit in the area’s Kaiparowits Plateau.

"I have some in my truck," he joked when asked about the site’s coal deposits. "It’s there, and the creation of a monument was to protect and not to prevent."

But he said the review must also consider the paleontological value of the monument, where the same plateau has produced tens of thousands of fossils.

Zinke could also attempt to address legal battles over the creation of roads in the Grand Staircase-Escalante monument, although he acknowledged he was unfamiliar with the issue prior to his visit.

"It’s got my attention," Zinke said of the dispute over what are known as R.S. 2477 roads, named after a Civil War-era law that local officials seized on to grade dirt roads in wilderness study areas.

From Utah to Maine

Under an executive order signed by Trump late last month, Zinke must issue an interim report on his monuments review — including recommendations for the 1.35-million-acre Bears Ears site created by President Obama in his final weeks in office — by June 10 and a final report on all monuments by late August.

Zinke has said he will not visit all of the more than two dozen monuments under review — located in Arizona, California, Colorado, Idaho, Nevada, New Mexico, Maine, Montana, Oregon, Utah and Washington. But he expects to make a trip to the Katahdin Woods and Waters National Monument in Maine.

"We’ll probably go up to Maine, maybe not next," Zinke said. Although he will visit Montana — where he’s from — this weekend, he said he will not stop at the Upper Missouri River Breaks National Monument, the only site in the state included in the review.

In addition, Zinke told E&E News he remains undecided on whether to recommend that the Antiquities Act of 1906 be revisited by Congress.

In a statement to Utah media earlier this week, Bishop asserted that "the real problem lies in the 111-year old Antiquities Act," which allows presidents to designate federal lands for protections to conserve areas of historic, cultural or scientific interest.

"I am confident the Secretary understands there must be legislative reform to the underlying problem, the Antiquities Act," Bishop said.

While Zinke, a former Montana House lawmaker, reiterated a statement he made earlier this week that it is "always good to work with Congress," he did not offer any details on whether or how the act could be changed.

During his repeated news conferences this week, Zinke often referred to the Roosevelt Arch at Yellowstone National Park’s north entrance. The structure features the words "For the benefit and enjoyment of the people" over the arch itself, and "Created by Act of Congress, March 1, 1872" on one of its pillars.

"I was disturbed by your statement regarding the accessibility of the regulations.gov website to members of the public who wish to participate in your review process," Heinrich, a member of the Energy and Natural Resources Committee, wrote to Zinke in a letter.

Heinrich noted that internet access is "far from universal" among tribal members in both Utah and New Mexico and that cellular service can also be "hard to come by" in those areas.

"A respectful engagement process with tribal communities would include opportunities for public discussion and oral comment," Heinrich wrote. "Access to regulations.gov is unequal and heavily weighted toward urban, non-Native communities — those least affected by the decision of whether to shrink or repeal the Bears Ears National Monument."

Grand Staircase-Escalante Partners Executive Director Nicole Croft was among those who protested during Zinke’s visit to the Kanab airport, criticizing Zinke’s reliance on local elected officials rather than staging any public forums.

"It was very selective," Croft told E&E News. While she acknowledged Utah’s strong GOP preference in elected officials, she asserted that Democrats who account for about 35 percent of the region’s electorate also need to be heard by the Trump administration.

"These lands belong to all Americans," Croft said, then turned to the paleontological and environmental research that has been conducted in the Grand Staircase-Escalante monument. "What we learn here matters to the entire West."