Zinke says science is key to agency shake-up. Is he sincere? 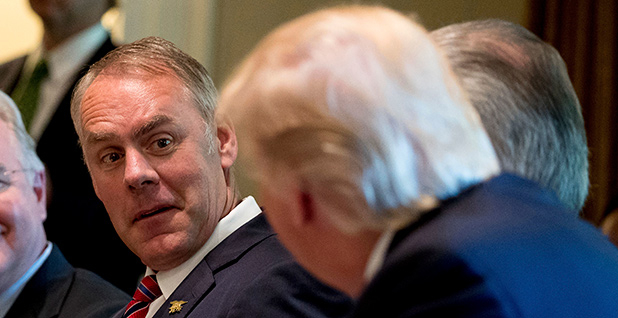 When Interior Secretary Ryan Zinke launched a massive reorganization of the department last week, he said good science would help him chart the changes. But former officials are raising questions about Zinke’s commitment to the scientific process.

During a two-day symposium at Interior headquarters last week, Zinke unveiled a map showing 13 proposed regions. Each one would encompass hundreds of thousands of square miles, where the agency’s regional bureaus would focus on issues based on their landscapes.

That caught the attention of former officials. They lauded the ambitiousness of Zinke’s plan to reorient the agency around ecosystems and watersheds. But they are also expressing concern about Zinke’s treatment of science, saying his budgetary actions contradict his plan to redraw the agency around a region’s terrain.

"It lacks some credibility because he’s talking about serious staff reductions and making major decisions like cuts to monuments that are majorly political and not based on the science, and now he wants science to support this regional structure," said Andrew Rosenberg, who served as deputy director of NOAA Fisheries under the Clinton administration.

Over the last 10 months, Zinke has sought deep budget cuts to the agency’s chief science office, the U.S. Geological Survey. He proposed slashing its funding by almost $160 million in fiscal 2018, bringing it to its lowest funding level since 2002. Now the secretary is tapping USGS to take the lead on drawing up his reorganization effort, by dividing the country into 13 regions, according to maps obtained by E&E News (Greenwire, Jan. 10).

Zinke said in a video announcement last week that he’s charting the agency’s new course based on a vision by John Wesley Powell, the second director of USGS. Interior will no longer draw its boundaries based on state and regional lines, Zinke said, but will draw them based on "ecosystems, watersheds and science."

Other officials are wondering how Zinke can pull off a massive reorganization based on science after proposing such deep cuts to those very programs. He has also rescinded climate change policies.

"The goals of coordination are important, and so, too, are missions of the specific bureaus, and figuring out how to balance those has been at least a three-decade-long proposition across administrations," said Lynn Scarlett, a former Interior Department deputy secretary and chief operating officer who also served as acting Interior secretary during the George W. Bush administration.

Scarlett, who is now global managing director for public policy at the Nature Conservancy, noted that good science is essential "to underpin and inform virtually all the Department of the Interior’s decisionmaking." Cuts to federal science programs jeopardize the ability of the science to get into the hands of federal decisionmakers, she added.

Rosenberg, now the director of the Center for Science and Democracy at the Union of Concerned Scientists, said Interior’s diminishment of science goes far beyond the Trump administration’s desire to save money.

He pointed to the agency’s dissolution of its climate change science advisory group, saying it shows that Zinke does not value independent scientific advice (Climatewire, Aug. 17, 2017). This week, nine members on the 12-person National Park System Advisory Board resigned after voicing concerns about the agency’s decision to scrap a climate change order and feeling ignored by Zinke. Interior Department spokeswoman Heather Swift said the resignations were "welcome" (Greenwire, Jan. 18).

Swift didn’t respond to a request for comment about how Zinke would incorporate science into the reorganization.

Interior officials have pushed to restructure the agency for decades.

"It’s not a new idea, and it’s not a bad idea," she said, adding that Zinke seems to be underselling the biggest benefits of his proposed reorganization.

"I haven’t seen climate change being touted as one of the main reasons for this reorganization, and certainly when it was discussed earlier, that was one of the primary motivations for trying to realign all the bureaus to be in sync," McNutt said.

One example was launched under Obama. The 22 Landscape Conservation Cooperatives (LCCs) are at their heart science-based. And they cost just $13 million.

Administered by the Fish and Wildlife Service, the program is aimed at improving conservation efforts across federal, state, tribal and private lands. It was designed to bring partners together across broad regions to improve the resilience of ecosystems and protect species affected by climate change and other threats.

"I was interested to see that Zinke’s reorganization highlighted the need to shift to collaborative science, because that already exists through Interior at the Fish and Wildlife Service’s LCCs," said Anne Carlson, senior climate adaptation specialist with the Wilderness Society. "It feels very much like he’s reinventing the wheel."

The LCCs commission science programs that support work on regional goals of protecting coastlines or sagebrush steppe ecosystems, for example. Using a competitive grants program, they have been largely successful in convening networks of scientists and managers and tribes to work together to develop the science that’s needed at larger spatial scales.

Carlson suggested that Zinke spend some time in the field with some of these collaboratives to "see the value they have seen by focusing on the very things he has said he values."

Both Scarlett and McNutt, who previously served at the Interior Department, suggested that Zinke slow down and consult with career staffers and others who are affected by policies on public lands.

"It’s much better to go it slow and really engage in collaborative dialogue," Scarlett said. "Have field meetings and reach out to the states and localities rather than try and be on speed-dial. The more you understand what the trade-offs might be, the better able you will be at trying to minimize them and the better success you will have at reaching the ultimate goal."